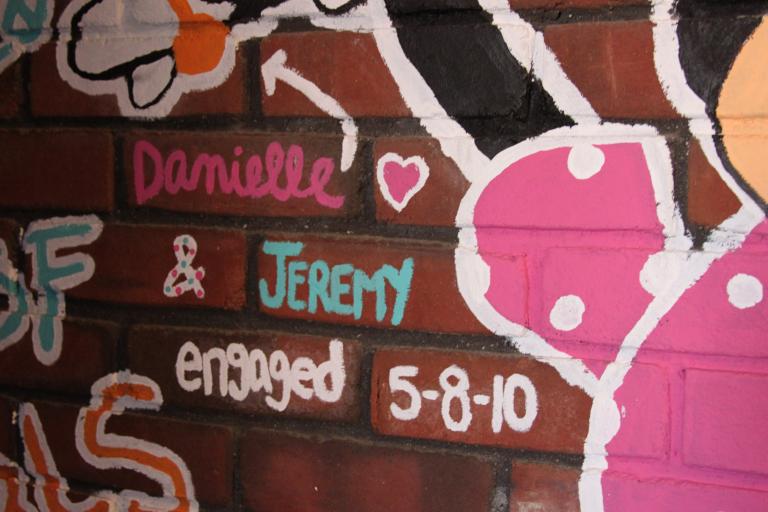 “For a number of years, we had a lot of white walls, so many years ago, this became a way to brighten them up and let the students really make the building feel like home.”

Most would not describe brick and mortar walls in a residence hall as having much character, but Thompson Hall’s walls are overflowing with it.

The walls, adorned by murals painted by students over several decades at Kettering University, offer a great glimpse into the personalities of the many students who have lived in the building over the years.

“For a number of years, we had a lot of white walls, so many years ago, this became a way to brighten them up and let the students really make the building feel like home,” said Katie Bosio, director of residence life. “Over the years, it has become kind of a living history.”

Bosio said students add about four or five new murals per year. Students living in the hall submit preliminary ideas for the murals they’d like to paint and then get approval from the residence hall association. They typically work in teams to create works of art that include a spectrum of everything from unique, original designs to recreations of cartoon and pop culture icons. The murals contain the names of all of the students (many of whom are now prominent alumni) who worked on them.

Kristen Russell ‘13, who was an RA in Thompson Hall, doesn’t describe herself as artistic, but she still found the mural-painting process to be an inclusive one.

Bosio said that murals are rarely painted over. There is still plenty of white space available, particularly on the fourth floor, which just recently reopened. In the areas where space is becoming scarce -- particularly in the girls’ unit -- some of the more dated murals may be covered up to give current students an opportunity to add their own artistic touches to the walls.

While public art displays are occasionally defaced, Bosio noted that those types of incidents are non-existent in Thompson Hall.

“Students understand and appreciate the history of the murals,” Bosio said. “We’ve never really had a problem with vandalism … students recognize the symbolism and importance these have had to other students in the past and don’t want to do anything to disrespect that.”

Pre-college students in Kettering’s AIM and LITE programs who stay in Thompson Hall in the summers have also been able to contribute murals to the walls in the past.

“It’s kind of neat for the AIM and LITE students who become students eventually … they can come here and go back and see what they did when they were younger and find their names when they move in as freshmen,” Bosio said.

The murals have become another of many important and unique traditions that help give Kettering University its character.

“The residence hall is such an important part of Kettering because everyone has to come through here, we connect with every student,” Bosio said. “I was visited by an alum this year who actually lived where my office is now in the 1970s when he was a student here. Forty years later, he walked through and could tell me where all of his friends and classmates used to live.”

Russell noted that the murals made living in the dorms feel much more like home.

“It is awesome to walk down the halls and see the murals from the last 20 years,” Russell said. “It makes the hall so much more friendly and interesting and distinguishes each unit's identity. It also helps me to feel more connected to the former students and their experiences at Kettering. I hope that future students will have the same sentiments when they see my class' murals.”