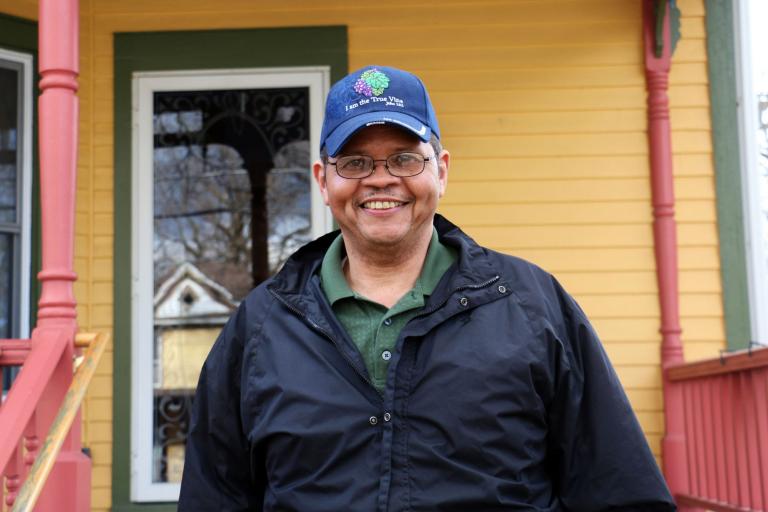 “This place is a showcase trying to invite others to rethink and relook in this area.”

The University Avenue corridor is more than a name or a place.

Between the anchor institutions of McLaren Flint, Hurley Medical Center, Kettering University and University of Michigan-Flint and the businesses - big and small - are the people, the families embedded here who live in the neighborhoods.

Approximately 6,000 people live in the neighborhoods along the University Avenue Corridor, including in Mott Park, Glendale Hills and Carriage Town - all neighborhoods seeing change over the years that includes blight elimination, new developments and community building initiatives.

“I’m glad to see that the neighborhood is rebounding. It’s a slow process, but it’s happening,” said John Zamora, who lives along the University Avenue corridor. “I bought a house here because of the historical importance of what Flint used to be and what it still can be. Thanks to Kettering, University of Michigan-Flint, Hurley Medical Center and other community organizations, they’re cleaning up the neighborhood. It’s great.”

Five residents were interviewed for this month’s #LifeOnTheAvenue feature: Sue Goering, Glendale Hills Neighborhood Association president, Frederick and Odette Jones, a couple living in Carriage Town for 23 years, Dan Kurin ‘11, a Kettering alum who lives in Mott Park neighborhood with his family, and John Zamora, a Flint native who bought a home just outside of Carriage Town in 2010.

It’s an active community. It’s a community coming together to make an impact and change the future. And it’s the community effort that has made the changes so successful, Zamora said.

“The area looks great. Atwood Stadium looks great. I love the bike path. It’s great that they are cleaning up Chevy in the Hole,” said Zamora, who also works in Flint at Carriage Town Antique Center. “It’s really great to be a part of the revival. I’ve seen improvements happening. Blight removal is happening. when people come over and visit I am thankful there is fewer rundown, boarded up houses in and around my neighborhood. There’s more green space. It’s just part of the process of renewal.”

And in 2012 the University Avenue Corridor Coalition (UACC) was formed, bringing together residents and area institutions to work collectively to beautify and draw investment to the area. Just over three years later, the group has led community cleanups that involve neighborhood associations, college and high school students, private residents and many others. Those cleanups have successfully beautified and maintained landscaping, fixed broken windows, painted both residences and businesses and – most importantly – brought  a fresh perspective and collaborative spirit to the avenue. They've also inspired other community partners to launch similar initiatives modeled after Kettering's successful Service Saturdays program.

Goering has lived in the area all her life. Her parents built her home in Glendale Hills home in 1939 when the road was dirt and there were only a few houses on the street. In 1983 Goering and her husband bought the home.

She attends neighborhood association meetings, UACC meetings and has witnessed the cleanup efforts in the community. Living along the University Avenue corridor is something she would encourage, she said.

“There’s such a variety of people and institutions and organizations along the corridor that make this place unique. We have a school here (Durant-Tuuri-Mott), their principal lives right here. The neighborhoods have their own flavor,” Goering said. “When you have hospitals (Hurley and McLaren Flint), two universities - one right in the middle of the corridor, Kettering, and then University of Michigan-Flint at the other anchor end - those institutions hold this organization together. In the middle are the neighborhoods, a football stadium now rejuvenated from years and years ago. Everything along the corridor over the years has shown signs of neglect and someone brilliantly said let’s pull this all together and bring it back to life and that’s what it’s done.”

Life on the Avenue

Frederick and Odette Jones live in a vibrant, colorful home in the Carriage Town neighborhood. They sit on their porch often and watch the community as it passes. During the interview Odette wore a shirt that read “I’m worth fighting for.”

She also stated “Flint is worth fighting for.”

Behind their house is the University Avenue and Grand Traverse Street intersection. Over the years they have seen a liquor store closed and knocked down to make way for a Jimmy John’s restaurant. Two parks have been created on opposite formerly blighted corners.

“With the involvement of Kettering and also with the insight of some of the other entities including Carriage Town Ministries, with their collaboration they’ve been able to turn the attitude around from what it was,” Frederick Jones said. “It has not been easy, but if you have that vision you’ll ensure that something good is going to happen. It’s not a microwave type of position you’ll have to assume. It takes grinding and lots of it.”

Kurin spent about nine years living in Flint, four while in college, one year downtown and then roughly four years in his home in the Mott Park neighborhood.

“I’ve definitely noticed there is a community feel where people are contributing in the University Avenue Corridor, especially in Mott Park. You see people out cleaning up the streets, cleaning up the area, helping the neighbors out,” he said.

Kurin enjoys seeing the events happen in Mott Park. In fact, events are happening all along the corridor, especially in the summer months.

Also in 2015, Light Up The Avenue was held to encourage residents along the avenue to decorate their homes with holiday lights. More than 100 residents participated.

“Living here for almost nine years, it’s been a great opportunity to see a lot of changes and they’ve been mostly good changes and that’s really exciting,” said Kurin, adding Einstein Bros Bagels and Tenacity Brewery to the list of new developments. “So not just seeing the old things being torn down but also seeing the new things come up is a positive thing for the community. It lends a lot of hope to the idea that Flint doesn’t have to be stuck in a rut but we can recreate our community.”

The future of the neighborhoods

There have been a lot of improvements so far along the avenue, but there is still work to be done, the residents say.

“I think the future of the University Avenue corridor is exciting because there’s a lot of things that it could be. One of the things that I am really excited for is the master plan that Kettering President Dr. Robert McMahan has rolled out,” Kurin said.

For Goering, she’s excited to see the community, residents and institutions continue to work together. There are people in the community that want the best for the area, she said.

“I think without the University Avenue Corridor Coalition this neighborhood would deteriorate. I really do. Without their support it would be even more difficult for us to be able to maintain and move to where we want to be for a safe and attractive neighborhood,” Goering said. “The people who are in the coalition are decision-makers, common ordinary people like me who are all working toward the same thing. They have been very focused on what they’re doing to affect everything, neighborhoods, businesses, institutions, schools, everything along the corridor. They’re very generous with their time and their resources.”

Now, it’s time to continue moving forward and building up the neighborhoods. There is hope for the future, Frederick Jones said.

“What I see now is a progression of regaining the spirit of moving forward and also to continue to evaluate what needs to be done down here,” he said. “This is a slow process but yet still there are people who are very eager and they want to come down here, especially during the summer months. Somehow it seems like this place is a showcase trying to invite others to rethink and relook in this area.”