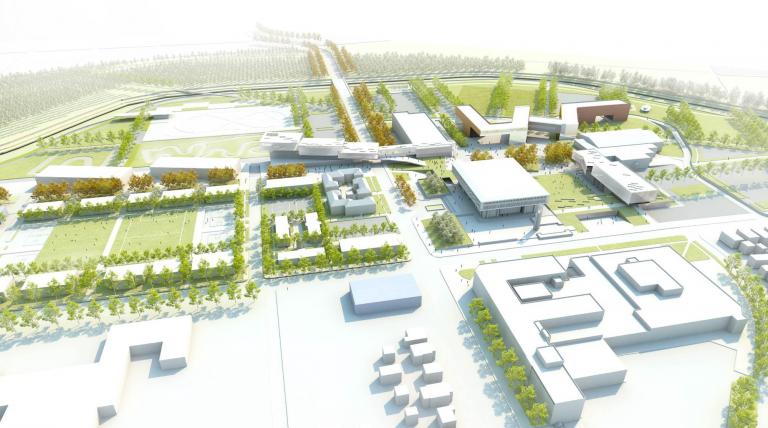 “Our goal is to create a campus that is as exciting and innovative as our educational programs and outcomes.”

Kettering University has a nearly 100-year history of producing some of the world’s most prominent and successful leaders, innovators, entrepreneurs and philanthropists. To position the University to continue to build upon this legacy in the 21st century and beyond, the University unveiled a bold new Campus Master Plan in 2014. The Plan is aimed at reimagining the campus to ensure that it continues to meet the needs of future Kettering students and faculty for generations to come.

The Campus Master Plan responds in part to the findings of a two-year, in-depth study by the University of the priorities and preferences of current and prospective students. The Plan heralds the creation of new facilities that will enhance learning opportunities on campus, open new opportunities for industry research and partnerships, create collaborative learning and living environments, and make Kettering’s campus a vibrant place that seamlessly intersects with the surrounding community and the growing number of assets in a resurgent city of Flint.

“The Campus Master Plan is a physical roadmap of where we want to go as an institution and what we want to become in the future,” said Kettering University President Robert K. McMahan. “Our goal is to create a campus that is as exciting and innovative as our educational programs and outcomes, and I am pleased that the community, as well as the Board of Trustees, have so strongly embraced it.”

Aesthetically, the campus will become more open and more seamlessly connect with natural features of the surrounding community. This includes re-orienting the University to face the Flint River, downtown Flint and the new main campus entry/gateway on Chevrolet Avenue which is now accessed via I-69 and Hammerberg Road. The Campus Master Plan imagines an environment on campus conducive to the lifestyle and learning opportunities students need today; and it will also positively contribute to the revitalization of Flint by redeveloping industrial brownfields, creating new green space and walking paths, and enhancing natural features like the Flint River.

“As an institution, Kettering has a long and established history of innovation, collaboration and working across disciplines and across industries,” McMahan said. “The Campus Master Plan takes that essential nature of our institution and weaves it into the physical campus.”

The first new building that will be constructed under the plan is a Learning Commons. It will be built across the “beach” from the Campus Center and will connect with the CC as well as with the adjacent Connie and Jim John Recreation Center, creating a “main quad” and central outdoor meeting point for the entire campus community.

Some academic department functions will move into this building to encourage cross-disciplinary collaboration. There they will have increased access to flexible, technology-enabled, collaborative spaces that will foster small group learning in addition to a new, modern electronic library and other resources. The building will also feature something that will likely be a part of every building on campus in the future – new food service venues and options. It will also have space to accommodate alumni and other campus guests, integrating them into the campus community for the entirety of their visit.

“Students want an immersive and social campus experience where they don’t have to leave campus,” McMahan said.  “When it is built, the Learning Commons will become the focal point for faculty and student interaction and collaboration at Kettering.”

The philosophy of creating a more connected campus is also central to plans for new dorms to replace Thompson Hall. The new dorms, planned to be the second addition to campus after the Learning Commons, will feature technology-infused flexible spaces that mirror those in more traditional academic settings. The facility will also offer enhanced on-campus living options to students.

“Currently, all of our freshmen live on campus but after their freshman year many students choose to live elsewhere. We want to be able to offer modern housing options for our sophomore, junior and senior students that are safe and comfortable and that are a part of the social fabric of the campus,” McMahan said. “These new dorms will allow us to give students a modern housing option that will keep them connected to the campus.”

The University developed the Campus Master Plan with the assistance of Stantec, an international, award-winning design and architecture firm. The Plan was featured on the cover of the November issue of the Construction Association of Michigan Magazine and also won an American Institute of Architects (AIA) Detroit Honor Award for its visionary transformation of the campus as well as its thoughtful integration into the surrounding city.

Other components of the reimagined campus include a new, community-focused use for the current Academic Building. In the summer of 2014, Kettering unveiled the FIRST Robotics Community Center in what was formerly the campus gymnasium. The facility, the first of its kind on any college campus in the country, provides residential space for up to eight (and eventually, as many as 16) high school FIRST Robotics teams. In the FIRST Center these teams learn to build advanced robots using state-of-the-art equipment and resources, but most importantly, they also connect with Kettering students and faculty and gain an immersive experience on the Kettering campus. That concept – opening up space on campus for the community, in particular for pre-college students to gain exposure to STEM and business concepts on the campus of our nationally ranked University – is expanded in the Campus Master Plan with the redevelopment of the Academic Building.

“A reimagined Academic Building opens up partnership opportunities with local youth organizations and schools, and allows us to dramatically expand on our current pre-college programs - perhaps even to include the creation of a STEM charter school in the building,” McMahan said.

The Campus Master Plan also sets as a goal infusing the campus with the visual arts, reinforcing the importance and connections between science, engineering, business and the arts and humanities.

Other components of the plan include enhanced green space, natural connections to existing resources, including the popular Flint River Trail network and the city of Flint’s Chevy Commons project, which will convert the Chevy in the Hole property south of the river into a mixed use natural park, wetland and recreation area. Construction of the Chevy Commons project begins this spring.

“The futures of Kettering University and the city of Flint are linked,” McMahan said. “We thought it critical that our Campus Master Plan support and complement ongoing projects to revitalize Flint. We have an important role to play in the rebirth of this great city.”