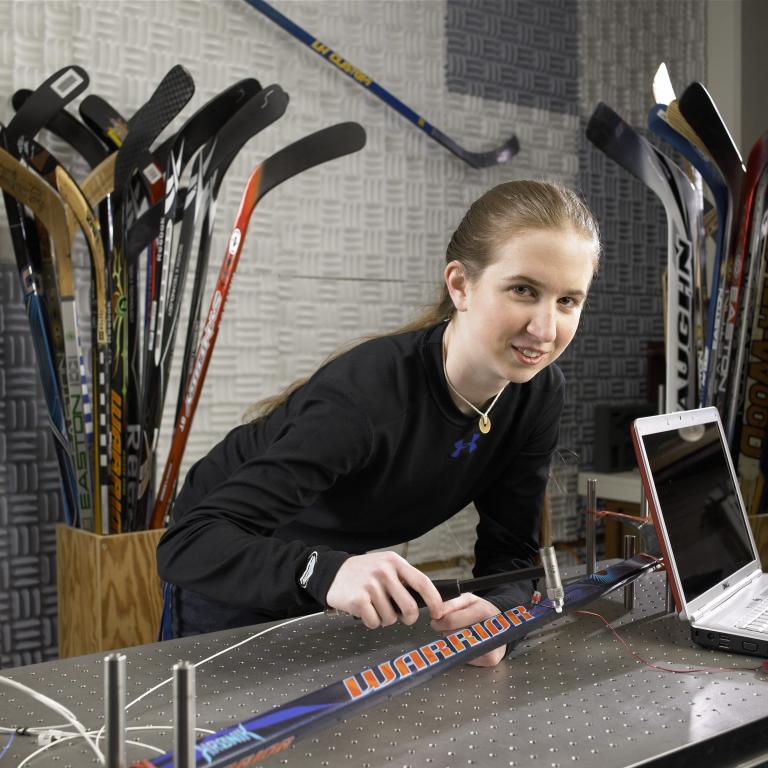 But the 2009-2010 season underway. Hope is on the rise, even as the team struggles with an unprecedented number of injuries. For at least one Wings fan, this season may mean much more than another stressful trip to the finals. It means more research and a new co-op job with Warrior Sports.

Junior Linda Hunt of Shelby Township, Mich., continues to work with Kettering University’s Dr. Dan Russell, associate professor of Applied Physics, on a study that examines the vibrational behavior of hockey sticks. Specifically, Hunt is interested in learning how a stick vibrates, how vibration relates to stick flex and how this vibration influences the sensation of tactile feel in the hands of a player. The ultimate result of this research could help manufacturers make longer lasting sticks.

She began working with Kettering’s Dr. Dan Russell in Kettering’s Acoustics Lab on her own volition in 2008 after approaching Russell about her desire to study the impact of stick vibration on a player’s shot. She became interested in this subject based on her experience as a recreational hockey player. Her curiosity was further piqued when she and Russell discovered that there were very few studies on this particular subject.

The primary thrust of the research focuses on modal analysis of sticks in order to study their vibrational behavior. “We recently received a contribution of sticks from several manufacturers that cover a range of materials and designs, such as wood, aluminum, composite and one-piece sticks. We would like to add to the scientific understanding of the vibration and acoustic signatures of hockey sticks made from different materials,” Russell said.

Recently, Russell and Hunt engaged in a related project that examined how sticks flex. The hope is to achieve a better understanding of shaft flex, which might assist them in analyzing some of their vibration data. Hockey sticks are rated according to weight, shaft flex and the amount of curve in the blade. For example, a stiff stick would have a flex rating of 110; a more flexible, youth model would have a rating of 40.

In this recent study, Russell and Hunt clamped the butt end of the stick and hung weights at the blade end to obtain shaft deflections similar to what a stick experiences when a player fires a slap shot.  Sticks that are more flexible than stiffer models may store and then release more potential energy in the hands of a player, though the skill of a player may have a greater impact on the speed of the puck than the stiffness of the stick. The flex and stiffness data Russell and Hunt collected compared well with published values obtained with a three-point bending test currently used in industry.

“Our research isn’t ground-breaking, but we did find that composite, wood and aluminum sticks behaved as we expected in terms of how their stiffness values compared,” Russell said. The stiffness values of sticks tested according to their research show that sticks with lower flex ratings do indeed have a lower effective spring constant and are easier to flex.
Russell and Hunt recently wrote up their results into a paper, “Spring Constants for Hockey Sticks,” which may be published in the journal The Physics Teacher later this year.

For Hunt, this project grew out of a desire to know more about hockey sticks and out of her love for the sport. “I love the research because I play hockey and like watching it,” she said, adding, “I’ve always been interested in learning how things work.”

And although she does not receive any academic credit for this research project, her efforts have earned her a prized cooperative education position at the corporate headquarters of Warrior Sports, based in Warren, Mich. (www.warriorsports.com). Warrior is recognized as one of the premier manufacturers of innovative, high performance, cutting-edge equipment, footwear and apparel for lacrosse and hockey athletes of all ages and abilities.

According to Hunt’s supervisor at Warrior, Josh Schmidt, who serves the organization as a product development engineer, the addition of Hunt and another Kettering co-op student comes at a time when Warrior is making steps to further develop the company’s production testing laboratory.

Before they joined the organization, he said that Warrior staff engineers were in discussions regarding the use of modal analysis. In addition, the company’s COO—Doug Hellyar—knew of Kettering’s co-op program based on previous experience utilizing Kettering students at a former employer and helped initiate the process to consider students for co-op at Warrior. When Schmidt reviewed student resumes, he saw that Hunt had experience with experimental modal analysis through Russell’s laboratory via her hockey stick project.

“Doug was the catalyst to get our co-op program going,” Schmidt said. “We have engaged Linda in helmet testing and have asked her and the other co-op to take ownership of this effort. This includes developing the testing procedure, make improvements to it and look further into the research to determine more efficient and effective ways to test helmets. She shows great enthusiasm, a great work ethic and understands the physics, science and engineering principles behind what we do,” he added.

Other projects Schmidt has Hunt working on include face protection testing using a pneumatic cannon to fire various sports ball projectiles at different types of eye and face protectors.  Hunt wrote the testing procedure, which included the necessary equipment and correct settings on the canon. Additionally, Schmidt works as a liaison between Hunt and Isaac Garcia of southern California, who is considered a hockey stick design expert.

For Hunt, this job is basically a dream come true.

“My co-op at Warrior has been great. Since I started, I’ve had to learn the testing procedures and NOCSAE standards for passing helmets, as well as testing and learning the company.  But I really enjoy working there because I really like sports and developing equipment is what I want to do with my career.  I was the first co-op they brought in, but they hired me and an A-section student at the same time, so it was cool having a fresh experience,” she said.

For Russell, Hunt is clearly a go-getter whose interest in this research is driven by a desire to learn more about a sport she loves to watch and play.

“Linda deserves this unique co-op opportunity—she works hard in the lab and clearly demonstrates a passion for her subject,” he said. Ultimately, Russell believes that her senior thesis project may focus on vibration testing of hockey sticks.