Student’s Co-op with FIRST Robotics Founder is a ‘Dream’ 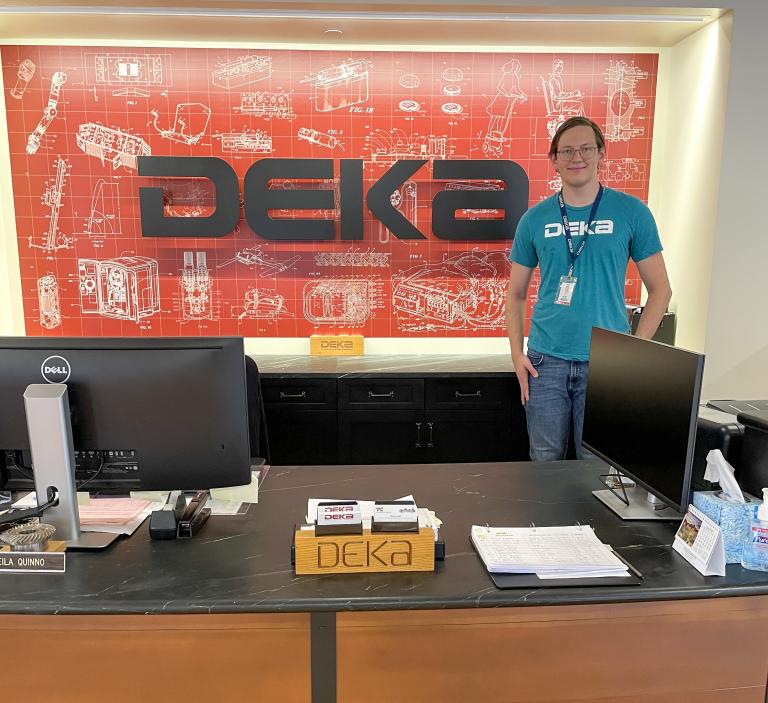 “I really do believe that Kettering helps to prepare you to accomplish the impossible.”

Austin Schmitz (’22, ME) took his love of FIRST Robotics to a new level when he began his Co-op at DEKA Research & Development Corp.

“It’s almost like the accomplishments and actualization of a vision I’ve had for many years,” Schmitz said. “It’s that realization that all of the work I’ve put in is paying off, and I’m able to accomplish what I’ve wanted to do. This is a dream job.”

Schmitz was part of the perception team for Roxo, a small, autonomous robot that uses the most advanced technologies in sensors, lidar, radar and artificial intelligence. DEKA is partnering with FedEx and Intel to explore various uses of the robot.

“The best part of my co-op is the freedom I've been given by my company,” he said. “It’s a challenging assignment, but I’m in an environment where I can excel. I’m allowed any resource I need and have been able to work in many different fields.”

Schmitz’s interest in FIRST Robotics started in middle school when he joined his school’s team. He participated throughout high school and volunteered as an announcer at competitions. Kamen and Schmitz first met at the 2022 FIRST Robotics World Championship, where Schmitz was volunteering for the University. Kamen told Schmitz to apply for a job.

“DEKA, in many ways, is almost like an extension of FIRST Robotics because it’s that final application of that love of science and technology, manufacturing to one big project,” Schmitz said. “If you look at a machine like the iBot or the Segway, some of the different medical things that we’ve worked on, some of these things we work on really do make a difference in the world. It really can change the lives of people.”

While his love of robotics got him to this point, Schmitz said his Kettering education helped make it possible.

“I really do believe that Kettering helps to prepare you to accomplish the impossible,” he said. “Not just from how to finish by the deadline but also to be able to work with people and do some amazing things.”

He said the pace of the Kettering experience also helped him jump into his work at DEKA.

“With the faster class schedule, with the availability of different programs to work on, knowing how to start a difficult problem and with some of the classes, you really learn how to start a problem you might not completely understand and how to research for it,” Schmitz said.

As he progresses through his last term, Schmitz is looking toward a career as a research and development engineer in the field of autonomous robots, but FIRST will be part of his life too.

“This is something I love to do, and I’ll be volunteering for FIRST for the rest of my life,” he said. “That’s my pick-me-up, volunteering and helping, seeing people find what they truly enjoy.”