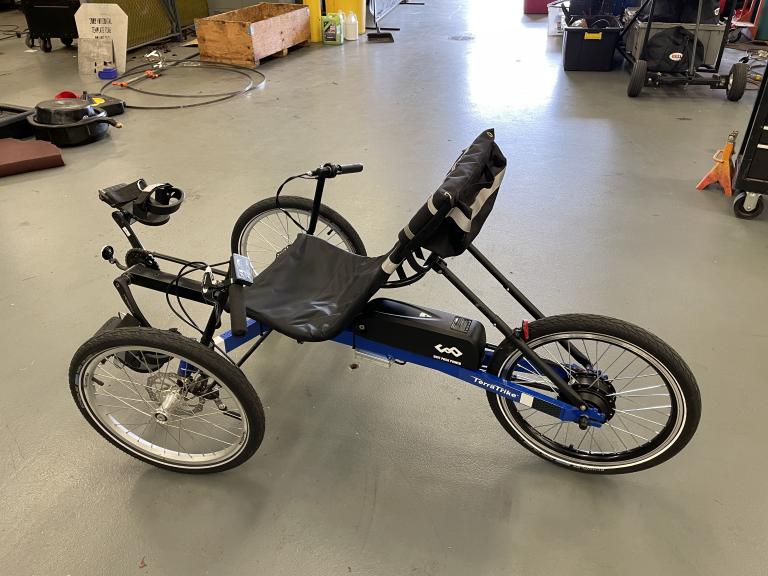 “I’ve been with Noah since he was born, so for him to do this for me was just a godsend”

When Noah Kowalczyk (‘22, ME) decided to pursue engineering, he hoped the products he would help create throughout his career would help people, but he wasn’t sure if he’d ever get to see those results until he upgraded a trike for a family friend.

“Making this for someone so close to me and being able to see firsthand how it’s impacting her life and helping her move again and get out and not worry about getting stuck at the hill, it’s really rewarding from a personal standpoint,” Kowalczyk said. “It was really awesome to help someone who helped raise me somewhat. … To give her that quality of life back means everything.”

Sharon Oswald has been friends with Kowalczyk’s mother since they were children. She has Friedreich ataxia (FA), a rare, inherited disease that causes progressive nervous system damage and movement problems. She is in a wheelchair most of the time, but she also enjoys riding her trike.

When Oswald heard about other projects Kowalczyk completed, such as building an electric skateboard and an electric bike, she asked him if he could add a motor to her trike. She lives on a hill and didn’t have any issues going downhill but worried about how she would make it back up.

“I’ve been with Noah since he was born, so for him to do this for me was just a godsend,” Oswald said.

She said she wasn’t surprised Kowalczyk was able to upgrade her trike but was surprised he did it so quickly.

“He picked up my trike, and four days later, he had a motor on it,” Oswald said.

Kowalczyk ordered some parts online and assembled the motor in the Society of Automotive Engineers (SAE) garage on campus. He delivered it to Oswald shortly after he graduated.

Since getting her upgraded trike, Oswald said she’s gone on a few rides and plans to hit up a nearby trail. She also plans to participate in a ride to raise awareness for FA, which affects about 1 in every 50,000 people in the United States. Oswald and both of her siblings have FA.

Kowalczyk is now a mechanical design engineer in California at Tesla in the power electronics group. Still, Oswald has another project waiting for him if he changes course: Her sister asked if he could put a motor on her wheelchair.

Either way, she credits Kettering’s programs for wherever life takes Kowalczyk.

“Kettering’s robotics programs are exactly what is needed for today’s workforce,” Oswald said. “There are a lot of opportunities for the students who attend there. The combined school and work teach students organization and responsibility and at the same time gives  them experience in the real world.”