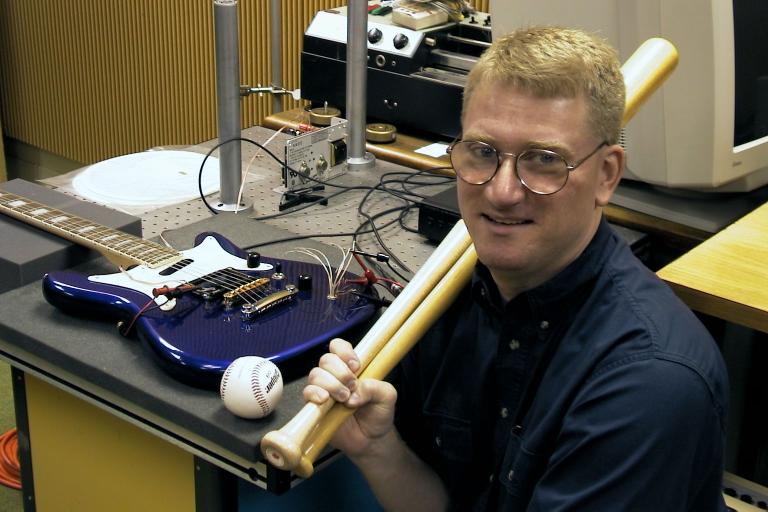 He doesn't have a contract to play with any team, or presume to make any assessments about why the Detroit Tigers have played so poorly the last several years. He doesn't hang out at the area batting cages, or attempt to instruct young players at local diamonds about the importance of a level, balanced swing.

He might even take in a game or two when he has time during the season, but for the most part Dan Russell, professor of Physics at Kettering University, leaves the playing to the pros and simply investigates the reasons why a player is able to hit a ball more than 450 feet out of a park.

In his Acoustics Laboratory on the first floor of the Academic Building hang several dozen colorful bats that players of any level would give their left toe to use. But Russell doesn't use these for his own playing purposes. Instead, he carefully scrutinizes these bats for a more intriguing reason, one that impacts America's game. In recent years, his research into the "sweet spot" of bats has increased awareness of his work on a national level. Russell attempts to explain the physics of the sweet spot, or barrel, based on the vibration of the bat, which involves a test called experimental modal analysis. This test employs a special hammer to measure force and an accelerometer, which measures vibration. Basically, Russell taps the bat at 1-inch intervals marked along its surface to determine how the bat vibrates. Results are then inputted into a computer program that creates two-dimensional movies showing the vibration and frequency. Additionally, in a recent paper presented at the 5th International Conference on the Engineering of Sport, Russell showed that he is able to correlate the performance of a bat to its frequencies of vibration.

In the early 1990s, the increased performance of aluminum softball bats raised concerns regarding an imbalance between offense and defense in the game, and the safety of players. In response to these concerns, the United States Specialty Sports Association (USSSA) and the Amateur Softball Association (ASA), the two primary governing bodies for softball in the country, established standards and regulations for the performance of bats. Recent changes in these standards have caused some consternation among bat manufacturers, according to Russell.

"The issue for companies was that the governing bodies were putting new rules into play before all the bugs had been worked out of the new test methods," Russell explained. "Specifically, variations in the balls used to test a bat could cause a bat close to the legal limit to fail the test. Also, the rules established by the USSSA and ASA are also undergoing changes, which is problematic for bat makers. These companies don't wish to spend a lot of funding on bats until the rules are set and firmly established."

So this past June, Russell, along with colleagues Lloyd Smith of Washington State University (WSU) and Alan Nathan of the University of Illinois at Urbana-Champaign, hosted "Bat-Ball 102" at the Sports Science Laboratory of the School of Mechanical and Materials Engineering at WSU. The course addressed the fundamental of the bat-ball impact and described to attendees the science used in the development of current bat and ball test methods. The first time Russell and his colleagues taught this course was July 2003. More than 25 engineers, vice presidents and other leaders from bat manufacturers such as Easton, Louisville Slugger, Worth, DeMarini, Rawlings, Miken and Diamond attended the course. This year, additional representatives from Worth, Louisville Slugger and DeMarini, as well as engineers from various bat-testing lab, enrolled in the course.

The current method of testing softball bats to determine their performance is called ASTM-F2219. This is a high-speed test for softball and baseball bats that verifies whether or not the science used in producing a particular bat is correct and meets current standards. Previously, the governing bodies (USSSA and ASA) utilized a slower speed bat performance factor (BPF) test to certify legal bats produced by manufacturers, Russell said. "But eventually, companies figured a way around the tests and made bats that outperformed the test. So the ASA contacted Dr. Smith and Nathan to revise the test, and the science involved in determining a bat's performance. The new test became mandatory this past summer."

This is one reason why bat manufacturers grew nervous upon the announcement of the new tests. The three colleagues are currently engaged in research on topics related to the science of bats and balls, which formed a perfect triangle for communicating information on the new tests, Russell said. His contribution for Bat-Ball 102 focuses on why certain bats perform the way they do. Smith described the methods behind bat and ball testing, while Alan examined the science behind the new rules.

"Bat manufacturers are concerned about how these new rules will impact their ability to produce and sell bats," Russell noted. "The goal behind our class was to help manufacturers gain a better understanding of why bats perform the way they do and how this new test works to measure that performance."

Overall, Russell said the course helped assuage the confusion expressed on the part of bat manufacturers. Companies expressed appreciation for the course and research. Russell said that most companies "would rather regulate the ball and leave the bat alone." However, he also acknowledged that players dislike playing with what one might characterize as a "dead ball."