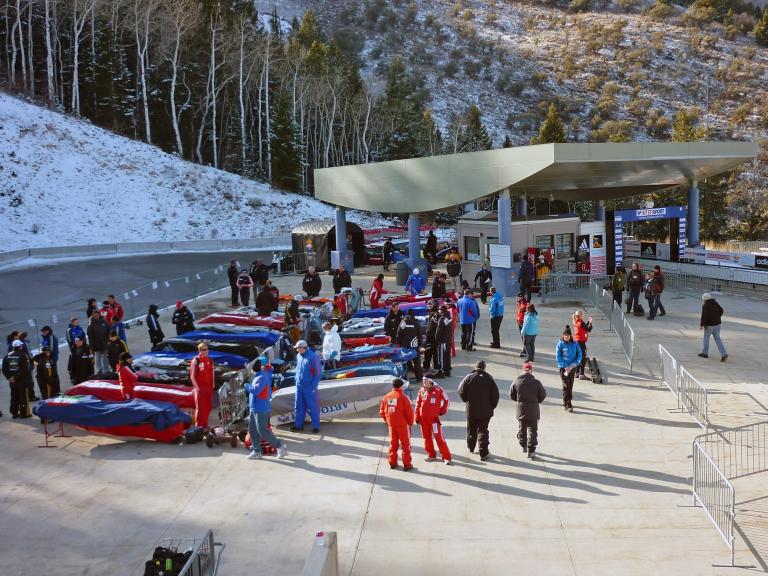 What does the soap box derby have in common with Olympic bobsledding?

Surprisingly, more than the average Olympic observer might know.

Brooks Townsend ’63 and Herman “Tex” Finsterwald ’66 are soap box derby legends who helped design the 2010 U.S. two-man bobsled under the direction of lead designer Ollie Brower. The story of their involvement in the development of the U.S. sled harkens back many years to their childhoods when soap box derby competitions enveloped their worlds.

Townsend’s two brothers won a national competition in the 1950s and their father was responsible for the development of a permanent track in their hometown of Anderson, Ind., one that’s still in operation today. After Townsend graduated from Kettering/GMI, he served as a senior industrial engineer at GM and also as director of the Anderson race for six years. Additionally, his grandson won this race in 2006 and placed third in the national competition in Akron that year. And to cap it off, Townsend earned induction into the Soap Box Derby Hall of Fame in 2008, which is based in Akron.

Like Townsend, Finsterwald enjoyed a career as an industrial engineer and retired as a senior plant engineer from GM in 1997 when Delphi was still a part of the organization. He has also enjoyed a life-long passion for soap box derby. He competed in races as a boy and became a local and national race official. He has also known Townsend for more than 40 years through their soap box experiences and earned induction into the Hall of Fame as well in 2006.

But the question still remains: what connection does soap box derby and bobsledding have in common?

That’s one reason why Ollie Brower, a retired Los Angeles firefighter who now lives in St. George, Utah, contacted Townsend and Finsterwald. Brower is also a former soap box derby competitor and has maintained involvement in the sport ever since. In addition, he became interested in design work as a teenaged soap box competitor and for the past 55 years studied physics, mechanics and aerodynamics with the idea of reducing drag and friction of moving parts. This experience helped him develop aerodynamic expertise in “slow speed,” which is a sub-group of “low speed” aerodynamics. After the 2002 Olympics silver medal run in the four-man bobsled by American Todd Hays, which ended a 46-year drought for the U.S., Hays met with one of Brower’s friends, Bruce Finwall, who is an aerodynamic engineer. The goal: design a faster sled, since Hays missed a medal in the 2002 two-man competition by 0.03 seconds.

“Bruce and Todd asked me to form a team of volunteers to design and build the world’s fastest bobsled,” Brower explained.

Eventually, Brower took over the entire design work and brought in his friends Townsend and Finsterwald to help work out some difficult challenges. Both Kettering/GMI alums were instrumental in helping the design team overcome several obstacles and insure that the sled met the strict competition design guidelines. Some of these issues included determining the optimum sled design to achieve a faster start; designing and building faster runners, which entailed an exorbitant amount of research and testing; and determining if the sled would be faster overall with the mass located high or low, among other concerns.

According to Brower, Townsend and Finsterwald created new axle mounts for the front and rear that significantly reduced sliding friction. “This was very difficult to do because of the tight rules,” he said, adding that the end result of their design “smoothed the jerky track transitions. The sled ended up being 1/2 second faster than the rest of the U. S. sleds on the Lake Placid track. A half second is a huge margin. The sled was 0.30 seconds faster than the rest of the U.S. sleds on the smoother Park City track.”

The result of their work sparked Todd Hays to miss a gold medal by just a hair but win a Silver Medal at the two-man bobsled Park City, Utah, World Cup event in November.

Townsend and Finsterwald said that their education at Kettering/GMI played an important role in how they approached the challenges presented by the bobsled design work.

“Some of the subjects I took at Kettering/GMI made me aware of different possibilities and areas that could be improved in aerodynamics, energy and vibration,” Townsend said. “I think perhaps the most satisfying aspect of this project was when we watched the sled run in competition in Utah against sleds from around the world and beat them,” he added.

Finsterwald agreed, adding that the sled “is only part of the picture. The athletes play a huge part in the performance. Todd Hays is arguably the top U.S. driver. But an engineering background is certainly a help when considering the physics, mechanics and aerodynamics of designing a sled.”

Todd Hays, the driver of the U.S. two-man bobsled, also believes that the two-man sled is perhaps the fastest he ever drove during his illustrious career.

“Many of the engineering changes that Tex and Brooks helped us with made the sled handle much better and reduced side slip energy loss. That not only helped with the finish time but also with our confidence and consistency,” he said.

Unfortunately, the status of the sled competing in the Olympics is up in the air. In late December, Hays was in Winterberg, Germany, with the two-man sled for the World Cup races. He agreed to test a new four-man sled but crashed during the run. He suffered a life-threatening hematoma and was forced to abruptly retire.

Fortunately, after a battery of tests, it appears Hays will be alright. But the question of whether or not the two-man sled will run in the Olympics is still uncertain.

“These guys are incredibly smart and I sure hope they will stay involved with the program in the future,” he said.