Olatunji’s drive to be a pro racer started at birth 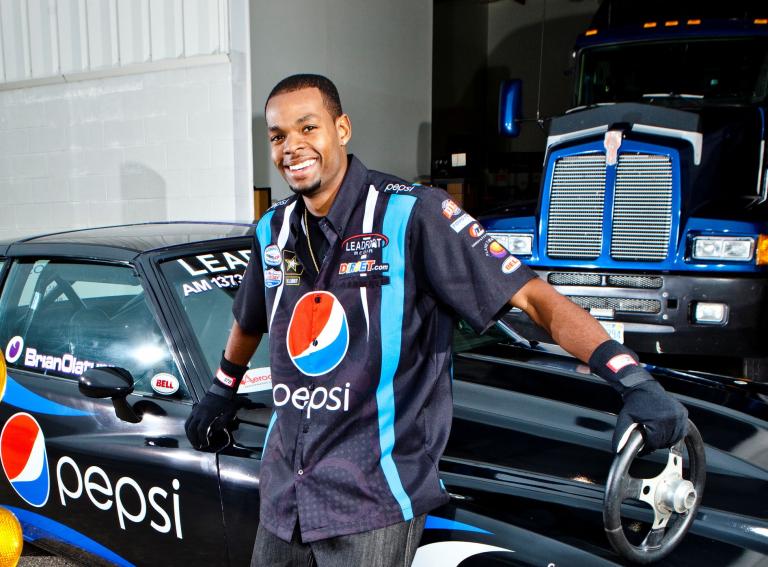 “Racing is literally in my blood. My mother worked at a racetrack while I was still in her belly. I was helping drivers push their cars to the starting line when I could barely walk.”

Brian Olatunji ‘05’s journey from the east side of Detroit to the professional drag racing circuit, is one that defies all odds.

“Racing is literally in my blood,” he said. “My mother worked at a racetrack while I was still in her belly. I was helping drivers push their cars to the starting line when I could barely walk.”

Olatunji put himself in challenging environments that fostered his growth as a drag racer and engineer.

“Chasing a dream is a gift and a curse, a constant sacrifice sometimes with little more gratification than the shimmer of a distant light at the end of the tunnel of success” said Olatunji about his drive to be on the professional tour.

Racing truly runs in the family. Olatunji’s grandfather, John Broaden, managed what were once the famous Detroit and Motor City Dragways. In 1971 Broaden became the first African-American to oversee a major National Hot Rod Association (NHRA) venue. Olatunji describes the ‘Detroit Dragway’ as an oasis.

”It was my heaven on earth, Saturday nights under the bright lights felt like the first day of school and there I was in the middle of it all,” Olatunji said.

Olatunji began attending Kettering in 2000. He enrolled in the Mechanical Engineering program in search of a marquee education that would complement his passion for drag racing.

“There’s something inspiring about being surrounded by geniuses, sometimes it makes you feel less special,” Olatunji laughed. “But it pushes you past your limit. It teaches you a new approach to the practical perspective.”

The Kettering University engineering program gave Olatunji the opportunity to apply physics and theoretical thought to the racing industry. His minor in business set the stage for a marketing acumen that later secured global powerhouse sponsors.

Many from the area he grew up on the eastside of Detroit have not been fortunate to find paths to education and career success, something that also drives Olatunji.

“I’m blessed to be smart. I knew education was my only option, and when getting out of the hood is always in the back of your mind... hard work becomes second nature,” he said.

Olatunji enjoyed a co-op assignment with the General Motors (GM) Truck, Car and Racing divisions until he graduated in 2005. His co-op experience allowed him to travel extensively. It was an unparalleled opportunity that fueled his drive to pursue his childhood dream.

“I always had the ambition to be a professional race car driver,” he said. “You don’t just go from the east side of Detroit to the drivers seat so I knew I’d have to work hard, but I got my first paying job at age seven so hard work was something I was accustomed to.”

Impressed with his determination and aggressive young mind GM hired Olatunji as a Heating, Ventilation and Air Conditioning (HVAC) design release engineer for its small track platform. A year later Olatunji was recruited by Faurecia Automotive. In 2007 he oversaw a $400 Million dollar Chrysler seating account and became the youngest program manager in the company’s history. Olatunji remained at Faurecia for three years.

“That’s when I decided to pursue my dream full-time from a racing perspective,” Olatunji said.

The United States Army became a sponsor in 2010 making Olatunji the face of its regional STEM initiatives which opened national doors for the aspiring race car driver.

In 2013 Olatunji, known as Brian O in the racing world, starred in the Speed Channel original series Dreams to Champions. The 10-episode series fueled larger conversations and opportunities for Olatunji.

“The TV show took me a step further, but I still have a few doors to kick through to reach my ultimate goal, competing for championships in the NHRA top fuel categories,” he said.

In 2010 Michigan Front Page Honored Brian with their top 30 under 40 award. In 2011, Kettering named Olatunji the ‘Alumni Entrepreneur of the Year’. The following year he received another prestigious honor from his hometown, Olatunji was inducted into Crain’s Detroit Business 2012: 20 in their 20’s Class, an award recognizing the states young business talent.