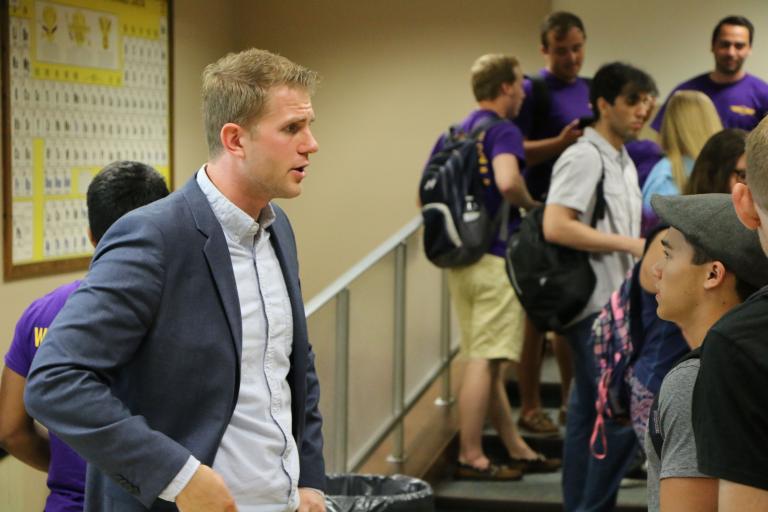 “The community and atmosphere at Kettering helped me find myself, find my voice and forced me into a leadership role naturally. I think Kettering helped teach me what it meant to push your boundaries push beyond what makes you comfortable.”

From a shy, introverted high school student in the suburbs of Flint to a global traveler with international ambitions, Bryan Coburn ‘12 unleashed his professional and personal potential at Kettering University.

“I was definitely a little more introverted, a little more shy when I came to Kettering,” said Coburn, on a Kettering University Alumni Success Panel on February 25. “The community and atmosphere at Kettering helped me find myself, find my voice and forced me into a leadership role naturally. I think Kettering helped teach me what it meant to push your boundaries push beyond what makes you comfortable.”

Coburn grew up in Swartz Creek and was hesitant to enroll at Kettering because it was so close to home but eventually the co-op program and the school’s relationship to FIRST Robotics guided him to campus.

“I was so into FIRST robotics. I loved the idea of designing and building a robot,” Coburn said. “Kettering offered such a positive environment for students to do that. I found out that was Kettering’s mentality with everything that they do.”

Coburn transformed into a leader at Kettering and is now enrolled in Harvard Business School to complete his Masters in Business Administration, a path that he never initially imagined himself pursuing.

Coburn graduated from Kettering with a degree in Mechanical Engineering with a Biomedical concentration and a minor in Business. His intent with his degree trajectory was to go to medical school which is why he completed his co-op at Biomet in Warsaw, Indiana, where he helped design instruments for surgeons.

“I wanted to be pre-med when I chose this company so I thought the medical industry was perfect for that,” Coburn said. “I got to work with a lot of surgeons, developing products that they wanted.”

In some cases, Coburn would speak directly with surgeons who expressed their needs and then design, machine and test the product in the cadaver lab. Specifically, Coburn performed stress-strain analysis on the ToggleLoc, a medical implant that could help repair anterior-cruciate ligament (ACL) injuries.

Back on campus, Coburn was engaged as the President of the Kettering Student Government and as a member of a fraternity that was devoted to giving back to the Flint community.

“The ability to give back to the University and Flint was huge to me,” Coburn said. “Kettering was most definitely the greatest time of my life. I was extremely involved and loved every minute of it.”

His efforts during the course of his undergraduate education led to Coburn earning one of the highest honors at the school - the President’s Medal - an acknowledgment of a student’s commitment to the University, community and co-op employer.

“It was an honor. I’m lucky to be able to receive that,” Coburn said.

The culmination of Coburn’s experiences was also shifting his academic interests from medicine to business. This transition culminated in his senior year when he applied to Harvard Business School’s “2+2” program which accepts students two years in advance on the condition that they continue to explore their professional interests for two more years in their chosen field.

“I applied and got in. It was the happiest day of my life,” Coburn said. “Harvard has a really good connection with Kettering. It’s a common route [for students].”

Coburn took advantage of this opportunity by combining his interests in engineering with another emerging passion - traveling the world.

Coburn participated in the Alumni Success Panel for prospective Kettering Students on February 25th from Tulsa, Oklahoma, one of the main headquarters for American Airlines. Since graduating from Kettering in 2012, Coburn has been working as a Structure Airframe Engineer for American Airlines. He oversees and maintains the maintenance program for the airline.

“I chose to work with American Airlines because it was a solid engineering experience that also provided me the opportunity to travel,” Coburn said. “It was an incredible opportunity for me to travel the world.”

In Summer 2015, Coburn will leave his position at American Airlines to return to school. This time, he’s not a shy high school student heading to a school close to home. The opposite is true. He’s an accomplished professional who has worked across the country, traveled the world and is about to embark on a journey exploring the East Coast at Harvard. However, one thing remains constant, his passion for working in medicine.

“Moving forward, I would really like to get back to the medical industry,” Coburn said. “That’s where my passion lies and where my education started.”