A new Crossfit gym has opened in a Kettering University-owned building near campus. Flint-native Jake Saldana and partners founded Old No. 4 Crossfit at 1113 University Avenue in Flint, Michigan.

The addition of the gym continues the growth of the University Avenue Corridor. Old No. 4 Crossfit is the first Crossfit gym in the city of Flint, where Jake spent his early childhood. Jake and his wife, Ashleigh Saldana, have operated a Crossfit gym in Davison for eight months and wanted to open a second location in Flint for quite some time.

The couple spent time each week looking for the right building in the city. Kettering University Vice President for Administration & Finance Tom Ayers showed them three buildings, including the one at 1113 University Avenue. The building had housed a mechanic shop and was in disrepair, but it was exactly what the Saldanas were looking for. Garage doors on either side of the building allow them to open up to views of University Avenue and Chevy Commons. 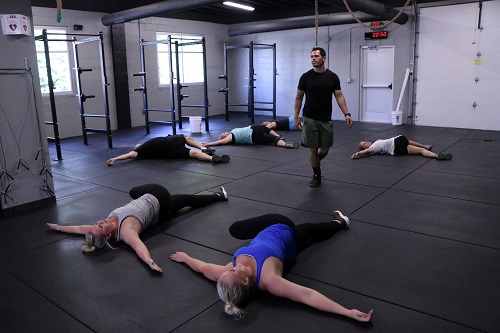 After struggling to find the right name, the Saldanas settled on Old No. 4, named for Chevrolet Plant No. 4 that once stood just across the Flint River.

“It shows grit and not giving up,” Jake said.

The University Avenue Corridor Coalition, founded in 2012 by Kettering University, is an organization of neighborhoods, small businesses, schools, nonprofit organizations, and anchor institutions working to create greater community collaboration with a singular long-term goal—creating a thriving, vibrant region in the heart of Flint.

The region extends from McLaren Hospital on the west to the University of Michigan-Flint on the East. It is bounded by Hurley Medical Center and Whaley Children’s Center on the north and the Flint River on the south. Kettering University is in the center of the region. The organization’s mission is to transform the region into an attractive and crime-free community that is conducive to sustainable development.

“It’s cool watching everything happen and being a part of it,” Ashleigh said.

Crossfit is a popular, data-driven, high-intensity workout program that includes weight lifting, running, and functional strength. Old No. 4 Crossfit is higher tech than some gyms, using two flat screen TVs to show the daily workout. Members can check in to a class with an app called Wodify to see the workout before the 60-minute class and keep a log of their workout.

A leaderboard on the screen also shows the member’s speed and reps in a friendly competition. All workouts are modifiable to suit individual needs and abilities. Instructors help members with form and technique to ensure safety and health.

The community setting allows people to keep each other accountable for their fitness and not get bored with their workouts, Jake said. Some Crossfitters use the workouts as a supplement to other activities. The Saldanas hope to attract college students, health care workers, police officers, and firefighters to the gym.

Beyond the daily workouts, Ashleigh said they look forward to creating a healthier Flint. In August, they hosted a back-to-school drive to collect school supplies for local students.