Laura Izquierdo ‘21 decided to merge her passions for art and science when she started at Kettering University.

Originally from Mexico, Izquierdo came to Michigan with her mother in 2014 after graduating high school. She started at a local community college before transfering to Kettering University to study Computer Engineering. 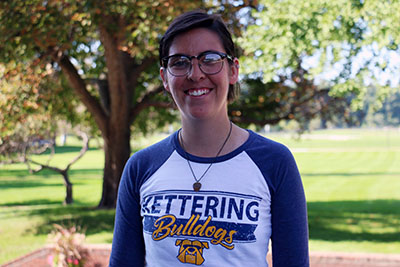 “The co-op program and learning it was a small school was what really drew me to Kettering. When I came here for a tour I really liked the culture and the people and I liked that everybody is really close with each other,” Izquierdo said. “When I started at community college, I was a theater major and inclined to be a music composer. I was a piano teacher in Mexico for awhile. I found that teaching was not my path. I’ve always liked both arts and science.”

At Kettering, Izquierdo can do both. Even though her major is Computer Engineering, the hobbies and clubs she is involved in revolve around the arts. In the evenings, she surrounds herself with music and theater. She participates in talent shows and open mic events showcasing her voice and musical abilities.

Izquierdo takes advantage of Kettering’s partnership with the Flint Institute of Arts. On Friday afternoons, she takes guitar lessons. A piano instructor also is available for students, she said.

“When I saw that there was guitar lessons available I jumped on it,” Izquierdo said. “I learned mainly from Youtube videos, and I have been playing piano since I was 8 years old, so I wanted to strengthen my guitar skills. In my free time whenever I can, I pick up my guitar. It’s always been an outlet for me.”

As a transfer student, Izquierdo said she felt welcome from the time she arrived on campus. And Kettering’s environment was exactly what she was looking for.

“I like that everybody helps each other. If you need help, everybody is there for you — teachers, classmates, and friends. I like that even if you have classes in a classroom we also have labs to get hands on learning,” Izquierdo said. “My co-op is at Jabil Circuits is very valuable. I went straight there before starting classes. Having a real job and having a job that’s in the industry I’m going to be in for the rest of my life is a lot of fun. I learned a lot.”