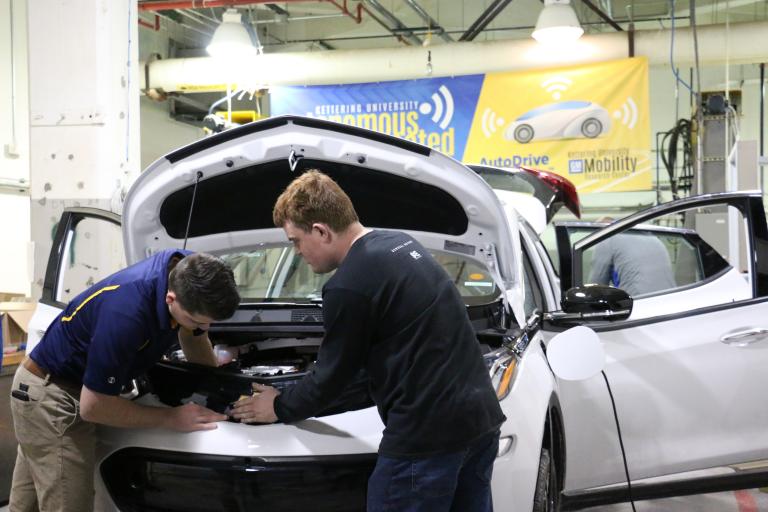 Kettering University students are using their skills and creativity to help an early education center in Flint by designing and building toys for its programs.

Students in four sections of IME100: Interdisciplinary Design and Manufacturing took what they learned in class to create fun projects for Educare Flint, which is located just down the street from Kettering. Toys included wooden letter boards, 3D printed letters, wooden board filled with different shapes, toys with moving gears and parts, mazes, 3D printed train tracks, Jacob’s Ladders, and nested toys, among others. 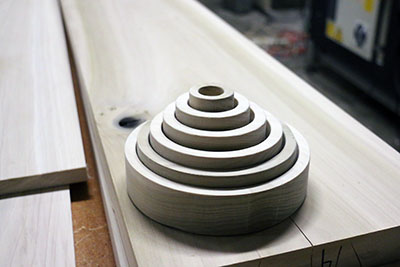 The goal was to stay basic, specifically making toys for children ages 6 months to 3 years old. The facility tries to mimic nature, so no bright colors and using natural wood colors were key.

“This project linked with the mission of Kettering to engage with the community and service learning. Once the students visited the facility, they saw how cool it was, and they were able to see some of the toys they already had. At that point, it really got their minds going. They were creative and innovative and had a lot of fun,” said Dr. Scott Grasman, Industrial and Manufacturing Engineering Department Head at Kettering. “I think as engineers in particular it’s good to see how what they design makes an impact. This project gave them a chance to get involved in the community and use what they are learning to contribute.”

Educare Flint serves more than 200 Flint children from birth to age 5. The comprehensive programs include health, nutrition, family support services, and more. A partnership was created between Educare Flint and Kettering thanks to lucky placement of seats on an airplane.

Dr. Christine Wallace, Vice President for Kettering Global, happened to be sitting next to Dr. Elizabeth Jordan, Early Childhood Education Specialist/Consultant for the Genesee Intermediate School District, on their way back to Flint. Jordan began talking about the center’s needs, and Wallace knew Kettering students were up to the challenge.

Step one for the students was to design the toys in CAD. The students then manufacture the product using computer aided manufacturing that creates the tool path. The toys were made out of wood using a CNC Router or out of plastic using a 3D printer.

By the end of the term, students delivered the toys in person and even spent some time with the kids. 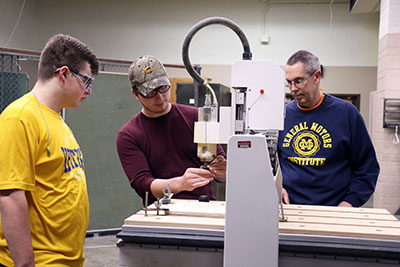 “I’m tickled. I’m very excited about this partnership with Kettering. It came about kind of serendipitously,” Jordan said. “I was saying I couldn’t find graduated toys for infants and toddlers that weren’t too overwhelming. It was really exciting to see what they came up with. It was more exciting to see the kids play with them. One child hid one so she didn’t have to share. I loved seeing the children’s reactions.”

Jordan hopes to see the partnership grow over the years. Kettering students are a great resource, not only for their engineering skills, but for their ability to connect with the children. The center also is in need of volunteers to spend time with the children.

There are many cool things that can be done with the toys, as well, including texture and sound.

“It’s wonderful. They are right around the corner. We would love to have more Kettering students come volunteer. They need students to come play with them and help stimulate the kids in the classroom,” Jordan said. “We really really want to do more of this. The staff was very impressed that the students got down on the floor playing with the kids. They did a really good job.”

For the students, it wasn’t just about passing the class. This project got them into the community and allowed them to have fun at the same time.

Jenna Salmen ‘21’s group designed and created two Jacob’s Ladders with the hopes of creating a project a little more different from the rest.

“I really liked visiting the Educare facility, meeting the kids, and talking with the teachers. It’s nice to know our class projects are going to get used,” said Salmen, who is a Mechanical Engineering and Industrial Engineering dual major at Kettering. “Kettering really prides itself on going out and doing things in the community, and it was nice to get the lower classman involved. That’s not always the case in other universities.”

Ben Tipton ‘23 and his group created a wooden stacking toy and had a lot of fun in the process. Tipton was used to the design part of the project, but the manufacturing portion was new to him.

“It’s always great to see your designs come to life,” said Tipton, a Mechanical Engineering major at Kettering. “I’m glad that it's going to some kids, and they get to learn well while playing with that. That’s our future. I feel like that’s one of the most important things here at Kettering that we are doing things for the community and not just for ourselves.”