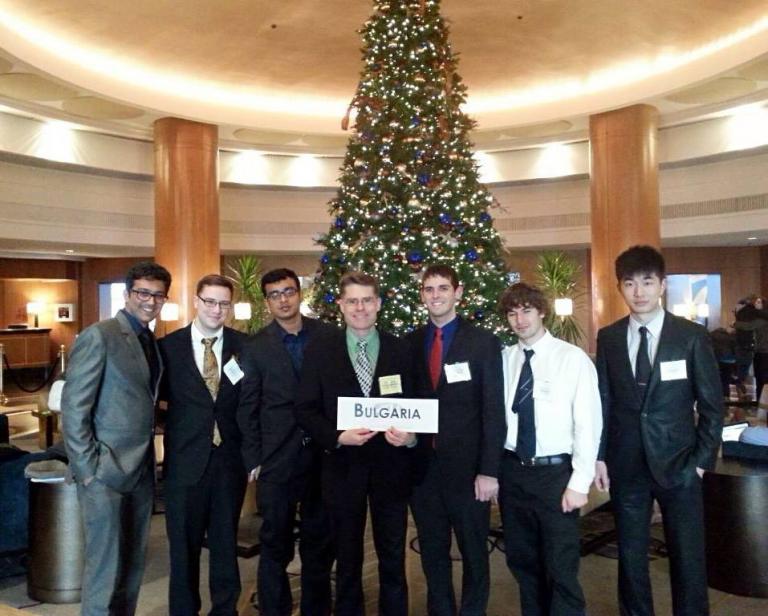 “Usually delegations who get the awards are students who led blocs, pulled people together and led in the writing of the resolution.”

For a span four days from November 22-25, a group of Kettering University students weren’t only representing the yellow and blue of the Bulldogs. Instead they opted to add the white green and red of Bulgaria and were honored by their peers for their efforts at the American Model United Nations International Collegiate Conference in Chicago.

Kettering received an award for "Exceptional Representation of Bulgaria" at the General Assembly First Committee. Kettering was just one of six (out of 100 total) delegations awarded for their excellence in leadership in bringing nations together and writing and adopting resolutions concerning the worldwide illicit trade in small arms and light weapons.

“The objective of the conference isn’t to get an award but to come to a consensus on international issues,” said Michael Graham, president of the Kettering University Model United Nations (KUMUN). “Usually delegations who get the awards are students who led blocs, pulled people together and led in the writing of the resolution.”

Mentored by faculty advisor Dr. Michael Callahan, Kettering students Jonathan Dickson, Michael Graham, Jiefu Li, Gowtham Subramanian and Harshin Vora were amongst the 1,400 participants from 100 colleges and universities in the Model UN event in Chicago in late November. However, preparations for the event started earlier in the previous term.

“During work terms, students are doing the research and preparations,” Graham said.

Before the actual competition, KUMUN prepared by learning the stances of Bulgaria on topics such as nuclear arms reduction, the illicit trade in small weapons and the cultivation of entrepreneurship. From their research, the group produced Bulgaria’s official position on the issues and then engaged with delegates from other countries at the actual conference in an attempt to write and pass resolutions.

“Delegates will lead a bloc with other countries who feel similarly,” Graham said. “There’s a lot of negotiation and debate when you’re at the conference. It’s a whirlwind. You are talking to a lot of people to rally votes to try to get a resolution passed.”

The award that Kettering received was its first at a national Model UN competition and is a testament to the growth of the club on campus and the work they are putting together in their spare time.

“As a team, as a delegation we are really growing and improving and getting to the point where we can compete with other delegations that you see at these competitions from Ivy League schools,” Graham said.

Kettering hopes to continue its success at a similar competition on the campus of Harvard University in February 2015 where they will represent Uzbekistan. KUMUN is also hoping to host a Model UN Conference on campus with Kettering students in spring 2015. But until then, they will maintain their focus on the core mission of their organization on campus.

“Our objective as an organization is to get engineers and business-minded students to apply their skills to the wider world,” Graham said. “It helps Kettering students to not only be good scientists, engineers and entrepreneurs, but also develop a global mindset to solve world issues."