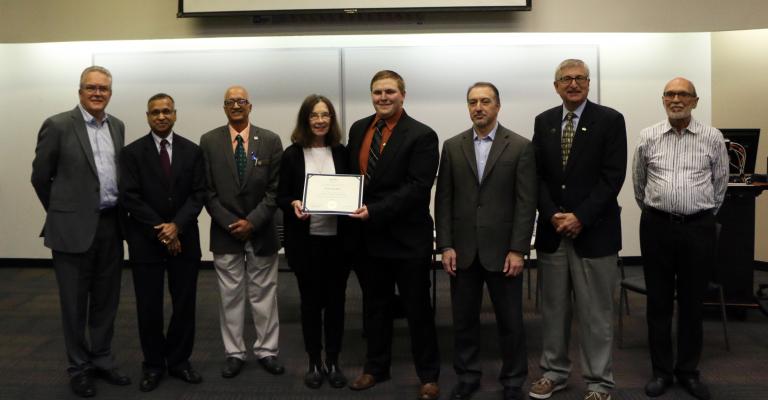 Kyle Swoffer ’21, a Mechanical Engineering student, will receive $10,000 from ASME.

“The scholarship means a lot to me because of how it makes paying for this school term so much easier, but more importantly it means even more to me that it was dedicated to the late Bruce Harding,” he said. “Martha Harding, his wife, and her cousin came to the ceremony and showed how grateful they were that I was receiving the award and she even told me that Bruce would have been happy that I was receiving the award. That really touched me and made it even more meaningful.”

The scholarship also will help him go where he wants to, he said. 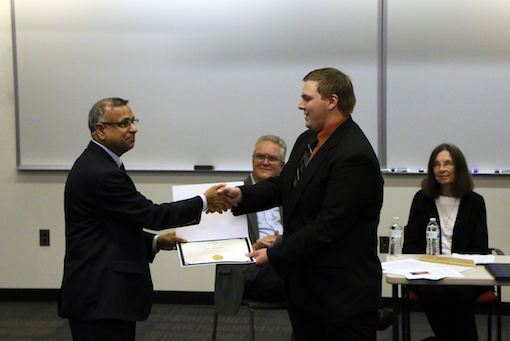 “Kyle's scholarship created awareness among the Kettering students what ASME can do to support students and student sections around the world to advance their careers in mechanical engineering,” said Dr. Raghu Echempati, Mechanical Engineering faculty member and ASME Kettering chapter faculty advisor.

The Standards and Certifications Memorial Scholarship is in honor of the late Dr. Bruce Harding, a longtime Mechanical Engineering professor at Purdue University. Harding held leadership positions in ASME, including Vice President of Standardization and Testing from 2010 to 2013.

A group of ASME members and Martha Harding, who was married to Bruce Harding, visited Kettering University to present the scholarship to Swoffer.

Martha Harding said her husband’s family had intended him to become a pharmacist, but engineering was his passion.

Swoffer chose to attend Kettering because of the co-op program. It’s turned him into a good employee and is preparing him for his future after college, he said.

“It was an obvious choice for me,” he said.

Swoffer works at Sterling Heights-based General Dynamics Land Systems for his co-op. He’s a resident assistant in Thompson Hall and is involved in Lambda Chi Alpha fraternity at Kettering. When he’s not studying or working, Swoffer plays intramural softball and dodgeball.