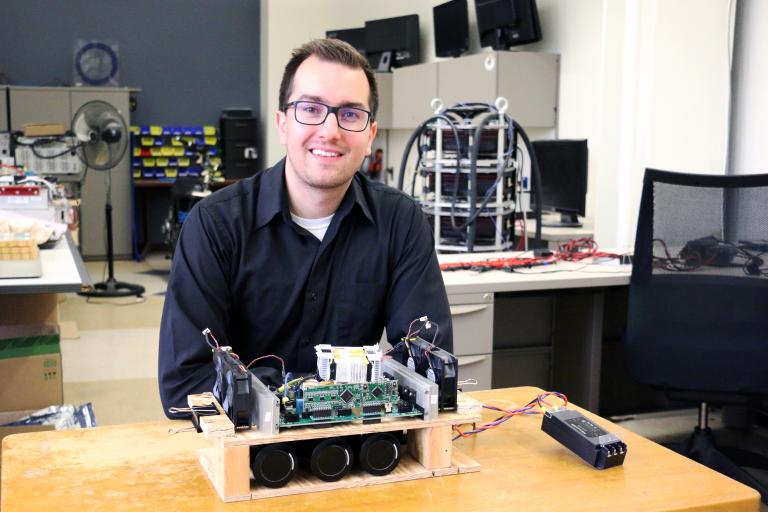 “We need to continue to push the envelope a little bit further.”

Kettering recently concluded its research with PowerAmerica, a public-private partnership between industry, the U.S. Department of Energy and academia, including 11 university partners. The goal of Power America is to accelerate the adoption of advanced semiconductor products made with Silicon Carbide (SiC) and Gallium Nitride (GaN) into a wide range of products.

For Allan Taylor ‘09 and ‘11,  lecturer in the Electrical & Computer Engineering Department, that meant looking at electrical vehicle battery chargers containing transistors made with elements other than pure Silicon.

“We are one of the only universities that had an automotive project as a part of Power America. It’s just trying to keep up with what industry is doing. EV manufacturers are packing more and more electronics into the vehicle,” Taylor said.

The project wrapped up in June, 2017, with some valuable conclusions being made.

Throughout the two year project, the Kettering team was able to design and build two effective prototypes: the first made with GaN transistors and the second with SiC ones.

Both battery chargers consist of a 7.2kW single-phase 240 VAC to 400 VDC power converter. The dual-active-bridge topology was selected for its wide range of voltage control and isolation. The team decided to use an exotic control algorithm, a triple-phase-shift.

“We successfully demonstrated that Silicon Carbide and Gallium Nitride devices can be used to construct a level-two electric vehicle battery charger for residential applications with reasonable size, efficiently and cost,” Taylor said. “The single phase AC battery charger was meant to be a low speed electric vehicle charger that you would plug into at home. The charger controls the AC current to have unity power factor, so we aren’t wasting energy coming in from the grid by circulating it around.”

With vehicles having more and more electronics included, it’s important to continue to make incremental improvements, Taylor said. Electronics need to continue getting smaller, have better battery life and have a lower cost.

“We need to continue to push the envelope a little bit further,” Taylor said. “It’s important to make sure we are always looking for new ways to shrink the electronics and make them more efficient with good performance without hiking up the price.”

In addition to his core research, Taylor also has a number of side research projects. He’s in the process of completing his Ph.D. in Electrical Engineering with an emphasis on power electronics at Michigan State University. While on campus, Taylor is also developing an electric commuter bike in his spare time which is expanding his childhood passion for all things electric.

“I’ve been interested in electronics since back in middle school,” Taylor said. “Me and a friend would ride the MTA bus to Radio Shack every week to spend some of our allowance money on electrical components. We bought training kits. We had no idea what was going on.”

Taylor purchased a standard bike from Wal-Mart for $100, an online electric motor kit, batteries, and then designed and built all the electronics himself. All of the software control was also developed by Taylor, containing over 3000 lines of code. For less than $1000, Taylor constructed a commuter bike that can go 25 miles-per-hour with a range of about 10 miles, without pedaling.

Taylor teaches circuits (lab and lecture), electronics and ECE 101 and is considering using this bike prototype as a future project for Kettering students.

“I thought about doing some sort of final project where they will play with hardware,” Taylor said. “To do something like this, this is a lot more, this might be better as a senior capstone project.”