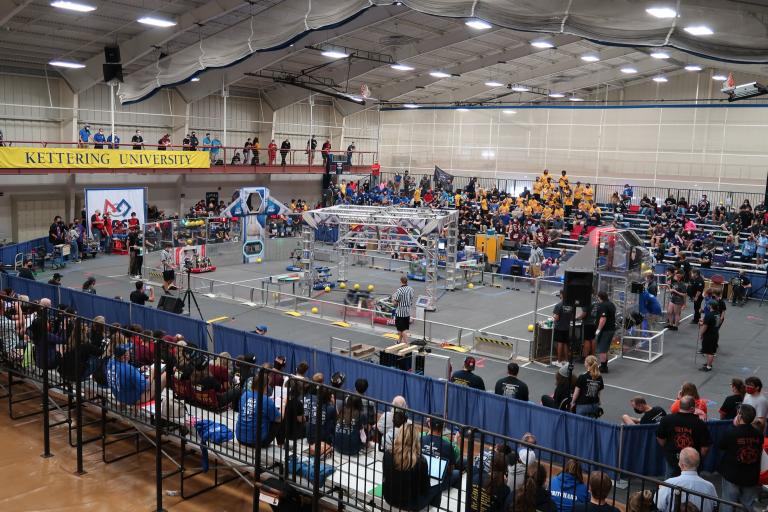 “This funding will really help each team get off to a good start by ordering parts now so they will be here in time for the new game reveal on Jan. 8, 2022, and when the teams start building their robots.”

“We’re very proud that Kettering is reaching out to younger people to get them excited about a career in engineering,” said Timothy Allen, Communications Officer and Secretary of the Board of Trustees for the Nartel Family Foundation.

The grant, which will support eight high school FIRST Robotics teams in the FIRST Robotics Community Center at Kettering University, is the Nartel Family Foundation’s first gift to the University.

“Fundraising for teams has been very difficult due to the pandemic,” said Bob Nichols, Director of the FIRST Robotics Community Center at Kettering. “This funding will really help each team get off to a good start by ordering parts now so they will be here in time for the new game reveal on Jan. 8, 2022, and when the teams start building their robots.”

FIRST Robotics is an inclusive, global robotics competition in which teams have six weeks to design, build and prepare their industrial-sized robots to compete in a field game against robots from other teams. Teams are responsible for the cost of the parts for their robots as well as travel costs to attend competitions.

In addition to designing, building and preparing their robots, Kettering-sponsored teams are responsible for creating a team brand and fundraising. Teams must also share their strategies with judges through written and oral presentations.

The FIRST Robotics Community Center opened in 2014. The University hosts two district competitions and sponsors the FIRST World Championship in Detroit each year.

For more information about robotics at Kettering University, click here.

Founded by Werner Nartel in 1990, the Nartel Family Foundation began as the Nartel Wildlife and Bird Sanctuary because of Nartel’s love of nature. Born in Germany in 1912, Nartel came to the United States when he was 22 years old. He eventually settled in Genesee County and started a successful jewelry business. He became well-known throughout the county and never forgot how fortunate he was to be in America. The foundation shifted its focus to community and charitable causes in 1995. Nartel died in 1997, but left a legacy in the foundation, which now supports the following five areas: children and education, medical and medical research, community outreach and Jewish- and Christian-faith-based programs, animals, and local cultural activities. For more information on the foundation, visit nartelfamilyfoundation.org.