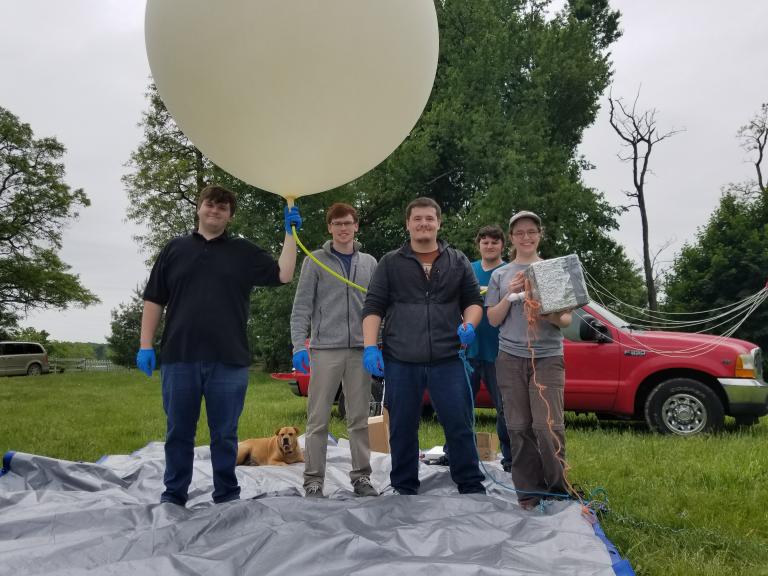 Kettering University’s Physics Club members were thrilled when the weather balloon they designed, built and programmed soared at an altitude more than 21 miles up in the sky.

Earlier this month, students launched their weather balloon to gather atmospheric data for Michigan. The latex meteorological balloon was filled with helium, and it traveled a distance of more than 20 miles. It had a camera recording video, as well as pressure and temperature sensors and a Geiger counter to read radiation levels.

“We wanted to do something a little ambitious for the club,” said Przemyslaw Piotrowski ‘19, President of Kettering’s Physics Club. “We were hoping to get atmospheric data for Michigan and have proof of concept that we can actually go out and do this and have it come back in one piece.”

They launched the balloon in Oxford, Michigan. It also had a parachute attached so when the balloon burst, the balloon payload with experiments would slowly float to the ground. All the data was recorded and stored in a file for the students to review and learn from.

“I thought the project was a pretty cool idea. It took quite a bit of effort to get everything set up, but it was worth it,” said Tyler Yuzwalk ‘20, Physics Club Vice President. “I was really impressed with the outcome of the whole thing. The parachute deployed pretty well and brought the payload safely back to earth. It landed on top of some guy’s garage, but they helped us retrieve it.”

The students saw where the balloon was at in real time throughout the experiment, thanks to an Automatic Packet Reporting System.

“Automatic Packet Reporting System is a way to transmit and receive digitally encoded positional data, including longitude and latitude, altitude and speed, over the radio. We had a transmitter on the balloon, and it would transmit this information on a specific frequency once every minute,” said Ruth Willet ‘21, Physics Club member and President of the Kettering Ham Radio Club. “This was definitely a very educational and exciting project. It was unique and fun to work on.”

Ruth, KM4LAO, is a licensed ham radio operator and received the APRS data on her handheld radio. The entire team enjoyed seeing the positional updates both on the radio and on the website aprs.fi, and the students always knew the position of the balloon.

The club’s first launch was successful, the students said. There’s a few things to improve and work on before the next launch. The students would like to add another camera and make sure the Geiger counter is interfaced with their programs to read radiation levels in the atmosphere.

Anyone interested in joining the Physics Club can stop by one of their meetings Tuesdays at lunch in the PAL Studio.

“I like these kinds of projects because they are like mini-engineering projects like what you would do in the workplace. We make design decisions and take the design in to careful consideration when figuring out how we wanted the payload to function. We also wanted it to be waterproof if it landed in the lake, and other factors went into play,” said Piotrowski, who is an Engineering Physics and Mechanical Engineering major. “We hope to show different aspects of engineering as well as physics.”