Kettering University Kicks Off Next Century With Tech-Centric Learning Commons 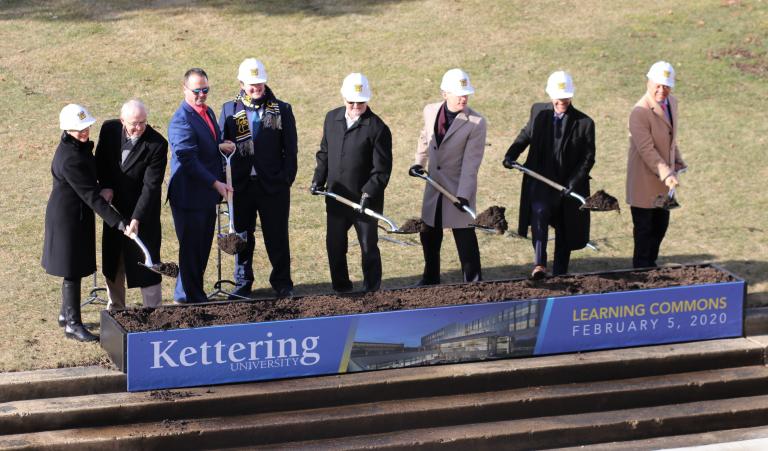 “This new facility represents a watershed investment in Kettering’s students, faculty, staff and the Flint community.”

FLINT, Mich. – Today, Kettering University officially broke ground on a 105,000-sq.-ft, state-of-the-art, multi-use facility that will serve as the academic hub of the campus.

“This new facility represents a watershed investment in Kettering’s students, faculty, staff and the Flint community,” said University President Dr. Robert K. McMahan, who was joined by Flint community leaders including Mayor Sheldon Neeley, special guests and University students, staff, faculty during the morning ceremony that celebrated the start of construction. “Investments like the ones we are making have a host of far-reaching implications – first and foremost, to our students. Through these investments we boldly affirm our commitment to providing an academic environment that remains unrivaled anywhere in the country.”

The $63 million, four-story building will house a digital library, an auditorium, dining facilities, media resource centers and multiple workers spaces that focus on mobility, artificial intelligence and collaboration between students, faculty and industry.

Also announced at the groundbreaking, the Charles Stewart Mott Foundation has granted $12.5 million to Kettering University toward building the Learning Commons and intends to grant up to an additional $12.5 million based on the project’s progress.

“We’re focused on strengthening the education continuum in Flint from cradle to college and career,” said Ridgway White, president and CEO of the Mott Foundation. “Kettering has played a vital role in that continuum for more than a hundred years. We’re pleased to support the Learning Commons to help propel Kettering into its second century and to continue attracting high-quality students and talent to our community.”

Designed by globally renowned architectural firm Stantec, the open-concept, natural light Learning Commons is part of the University’s Boldly Forward strategic initiative campaign – the largest in Kettering’s history. The building project will be facilitated by Clark Construction of Lansing, Mich., and multiple Flint- community contractors and is expected to be completed by Spring 2022.

According to Kettering University Board of Trustee and Boldly Forward Campaign Chairman Gary Cowger, the future of the university is bright.

“This campaign – and in particular, this building – is an example of what can be accomplished when we collectively commit to building something extraordinary for generations of students and our entire community,” said Cowger, who along with his wife Kay personally made a $1 million investment in the Learning Commons.

“When we launched the Boldly Forward campaign in June 2019, it was truly a bold venture. But the University’s priority was to make the Learning Commons a reality. And now less than a year later and thanks to the generosity and support of alumni, donors, the local community, friends and many others, this is a reality,” said Susan L. Davies, Vice President of University Advancement and External Relations. “What an exciting and perfect way for our students, staff and faculty to embrace the next century and the future of Kettering.”

For more information, go to kettering.edu/LearningCommons.

About The Learning Commons
With its February 2020 groundbreaking, The Learning Commons will serve as the academic hub of Kettering University’s Flint, Mich., campus. Designed by globally renowned Stantec architectural firm, the 105,000-sq.-ft state-of-the-art, multi-use and student-centric facility emphasizes and fosters innovation and collaboration. The open concept, natural light design includes a new digital library, an auditorium, new dining facilities, media resource centers and multiple student workers spaces that focus on mobility and artificial intelligence. Clark Construction of Lansing, Mich., and multiple Flint-community contractors will facilitate the project, which is slated to be completed by Spring 2022. As part of the University’s Boldly Forward strategic initiative campaign, the building represents the University’s commitment to provide forward-thinking opportunities, experiences and solutions for generations to come. For more, go to kettering.edu/LearningCommons.

About Kettering University
Kettering University, formerly known as GMI, is a Flint, Mich.-based private, nonprofit university recognized as one of the nation’s premier science, technology, engineering and business leaders in higher education. Dedicated to offering a curriculum that uniquely integrates classroom learning with experiential co-operative opportunities, Kettering consistently places in U.S. News & World Report’s listing for elite specialty schools. The University has more than 27,000 feet of lab and research space used by faculty, students and industry collaborators, and boasts the only ABET-accredited applied physics program in the world. It also houses the first and only FIRST Robotics Community Center in the United States. According to a 2019 analysis of federal data ranking 4,500 schools nationwide, Kettering University degree holders have the highest lifetime return on investment (ROI) in the state of Michigan. The University celebrated its centennial year in 2019. For more, go to kettering.edu.