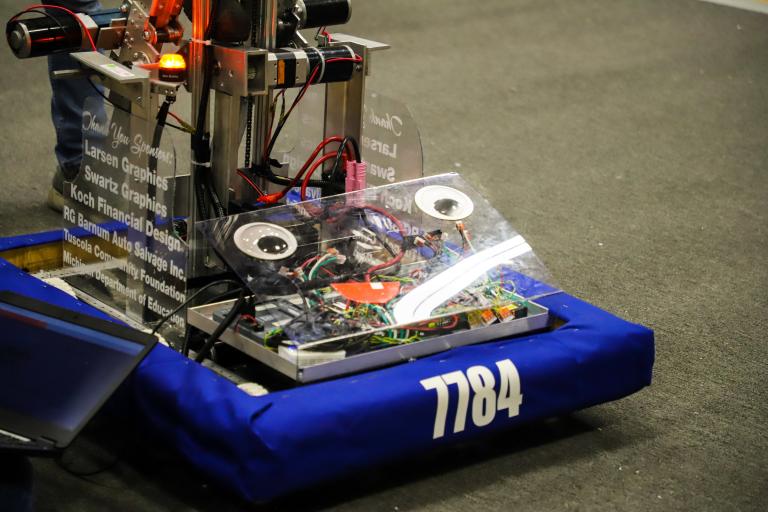 More than a thousand high school robotics students will flock to the Connie and Jim John Recreation Center at Kettering University this weekend for two Kettering Kickoff Championships.

Seventy-seven FIRST Robotics Competition (FRC) teams from Michigan, Ohio, Illinois and Pennsylvania are expected to participate Saturday and Sunday in the 2022 FRC Game, RAPID REACT. Pits open at 7 a.m., with Opening Ceremonies starting at 8 a.m. on both days. The event ends–and the venue closes–at 7 p.m. both days.

RAPID REACT is part of the 2022 season, FIRST FORWARD, which is inspired by the United Nations’ Sustainable Development Goal No. 9 to build resilient infrastructure, promote inclusive and sustainable industrialization, and foster innovation. To that end, FIRST FORWARD calls for students to overcome transportation challenges with forward-thinking technological innovations.

In RAPID REACT, robots start the competition on their respective tarmacs with preloaded cargo, then deliver the loads to specific points, where they collect additional cargo. The robots can receive assistance from players at the terminal and earn points for reaching various goals before the match ends.

Although the 2023 challenge isn’t announced until January, many teams use this event as a recruiting tool to expose interested students to a competition and the result of a six-week build season, said Kim Shumaker, Director of the Kettering University FIRST Robotics Community Center.

Many teams also will tour campus and participate in Pizza and Professors, an event in which students enjoy pizza and conversation with Kettering professors.

“Kettering University values the skills and experience robotics students gain through the FIRST Robotics program and other programs like this,” Shumaker said. “Students learn to problem solve, innovate and work as a team—all while having fun.”

“Bringing events like this to Flint has the additional benefit of contributing to Flint’s economy,” Shumaker said. “From hotel bookings to restaurants, these events are a great source for bringing visitors to Flint and the surrounding area.”

In addition to two FIRST Robotics workshops in October, Kettering University will host nine VEX and FIRST robotics and aerial drone competitions through May, each bringing 24 to 80 teams to the area. The University has hosted two district competitions each year since 2008. Kettering also hosts state and regional championship events for robotics and drones.

Categorized as vertical robotics, aerial drones are growing each year. Teams learn about drones, flight principles, programming, documentation and communication skills as well as career opportunities in the drone industry. Recognizing the skills and experience students gain by participating in the Bell Advanced Vertical Robotics Competition, Kettering anticipates it will add those competitions to its agenda in the near future.

VEX and aerial drone competitions are organized through a partnership with the non-profit Robotics Education and Competition (REC) Foundation, an educational foundation dedicated to increasing student interest and involvement in science, technology, engineering and math (STEM).

Kettering University began sponsoring high school FIRST Robotics teams in 1998. It offered its first two scholarships to FIRST Robotics students in 1999 and has awarded more than $5.5 million since then. The FIRST Robotics Community Center opened in 2014.