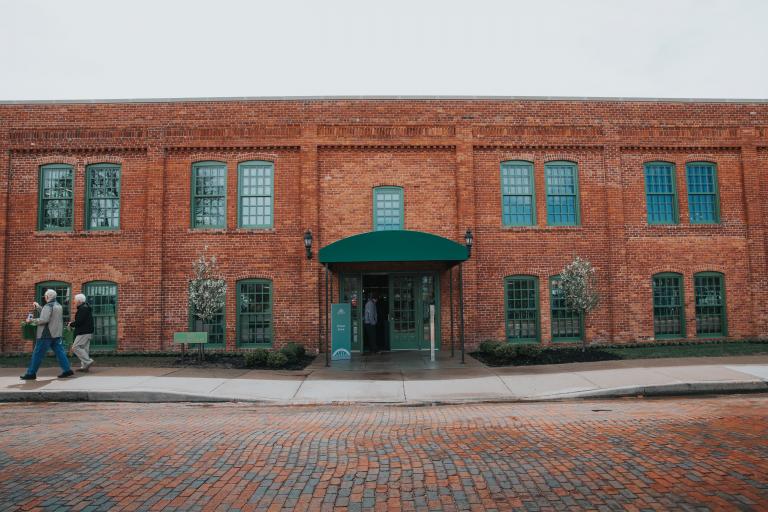 “It shows what you can do when you have a dream and strive to make that dream real.”

Kevin Kirbitz ‘84 tracks his passion for Flint history to three events in his life. First, a guest speaker that spoke in his elementary school classroom about the history of Flint. Second, his mother, who worked in public relations for General Motors, would share stories about the company on a daily basis. Lastly, he read Lawrence Gustin’s book titled “Billy Durant – Creator of General Motors.”

“At the time, I was like ‘wow this happened here,’” Kirbitz said. “This is where I live.”

These experiences catapulted Kirbitz on a lifelong pursuit to comprehend the history of Flint. Kirbitz’s pursuit was formalized when he was named Operations Manager for the newly renovated Durant-Dort Factory One, which also includes the Kettering University Archives.

“The archives gives the building as a whole a sense of being and a sense of purpose,” Kirbitz said.

When Kirbitz was in eighth grade, he entered a graphic arts contest where he was asked to design a logo for Crossroads Village. His design won the contest but it was the research behind the art that left a lasting impression.

“The experience of doing that research to understand the lumber and carriage industry -- it really set an interest and sparked a passion,” Kirbitz said.

Kirbitz attended Carman High School a few miles from campus. He was interested and talented in math, science and industrial arts. Both his parents worked for General Motors in Flint which led him to follow in their footsteps and attend Kettering (then General Motors Institute).

“It was the co-op opportunity,” Kirbitz said. “It was an opportunity to a get a first rate experience, put myself through school and really do something that interested me.” 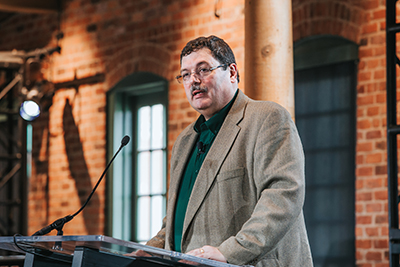 Kirbitz majored in Mechanical Engineering and completed his co-op at Buick in Flint. While at Kettering, Kirbitz enrolled in Dr. Richard Scharchburg’s history class in the Liberal Studies department. In 1983, Scharchburg recognized Kirbitz’ interest in the history of Flint and encouraged him to apply to an essay contest sponsored by the Genesee County Historical Society. Just like in middle school, Kirbitz once again won the contest.

“When I was completing my co-op at Buick, I’d go through the past records where they had blueprints of buildings that had been torn down years before,” Kirbitz said. “There were a lot of people enthralled with Buick history. You start to study and build friendships with other people who are interested in history.”

By trade, Kirbitz was a manufacturing engineer. Shortly after graduating from Kettering, he moved to product development for General Motors in 1987. In 1998, he was transferred to Oshawa, Ontario, Canada for three years to work as a quality engineering manager for the Chevrolet Impala and Monte Carlo. In 2001, Kirbitz transferred to the Warren Tech Center to work as a vehicle architecture manager which combined his passion for engineering and design. His position was a bridge between the two disciplines and required him to integrate technical requirements of vehicles with their aesthetic design, the balance of form and function.

Kirbitz moved to Grand Blanc, Michigan, just outside of Flint, after repatriating. This encouraged him to once again become involved in the history of Flint by volunteering with the Durant-Dort Carriage Company Foundation (DDCCF).

The DDCCF owns and operates the Durant-Dort office building, a registered national landmark that was originally restored under the guidance of his former professor, the late Richard Scharchburg. Kirbitz helped initiate a fundraising campaign for the restoration of a building and decided to throw a “hail mary pass” to the General Motors (GM) Foundation in 2012. He called Mark Reuss, currently executive vice president, Global Product Development, Purchasing and Supply Chain at GM, whom he had worked with during his stint at Buick in the early 1990s to see if the GM Foundation was interested in supporting the fundraising campaign.

“That’s where Billy Durant’s office was when he founded GM,” Kirbitz said. “A lot of the work he was doing was right here in Flint. The conceptual start was in the Durant-Dort office. It’s a piece of history.”

Inspired by the history himself, Reuss arranged funding to restore and maintain the Durant-Dort office during his visit to Flint in November 2012. That’s when he first noticed Factory One across the street. Kirbitz and Reuss discussed the history and significance of the building. Reuss was interested. In January 2013, he called Kirbitz and notified him that GM was interested in purchasing and restoring Factory One. GM officially acquired the building in May 2013.

While still maintaining his full-time job in at the Warren Tech Center, Kirbitz began exploring the architectural challenges of restoration. During the next two years, Kettering University President Dr. Robert K. McMahan and Reuss discussed moving the Kettering University Archives to the newly renovated building in order to unite the history of GM in Flint under one roof.

“The Kettering University Archives gives the building a community presence,” Kirbitz said. “It’s the main part that people see when they visit.”

In addition to the Archives, the building was designed as conference and event space and an open second floor office for GM employees.

Kirbitz was involved with restoration efforts on a voluntary basis until December 2015 when he once again got an unexpected call from Reuss. Kirbitz was offered a full-time position to manage Factory One starting in spring 2016.

“My immediate reaction was ‘oh hell yes,’” Kirbitz said. “This was something I wanted. It’s my dream job.”

On May 1, 2017, GM’s Durant-Dort-Factory One was unveiled as a state-of-the-art facility in the heart of downtown Flint. For Kirbitz, the journey is personal as he was able to combine a passion for engineering and the history of Flint into a historic project and career. But the restoration of Factory One means more than a building or a career. It’s a symbol of ingenuity, innovation and excellence in engineering in Flint.

“When we keep our humble beginnings in perspective and you look at what was achieved here -- this is the epicenter of the auto industry and it launched an international industry. A lot of people say it was Detroit but I’d argue it started here in Flint,” Kirbitz said. “Then you look at all the other things that happened here. It shows what you can do when you have a dream and strive to make that dream real. It’s all here. It all started here.”