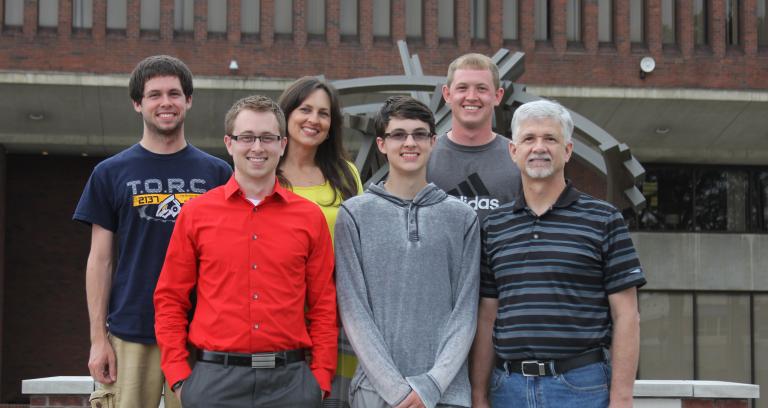 “The growth and opportunities available to my children was outstanding.”

Titus Shumaker ‘19 first visited Kettering University long before he enrolled as a student. He first set foot on campus in 2007 when he was visiting his older brother Andrew Shumaker ‘12, who was a freshman at the time. He also visited his brother Cole Shumaker ‘16 multiple times in the following years before finally enrolling himself in 2014.

“I feel really comfortable on campus. That’s why I chose Kettering because I enjoy the vibe here,” Titus Shumaker said. “I really like the co-op program. I like how it’s a small school and you can get to know the professors. I like the environment.”

Andrew, Cole and Titus all chose to pursue Mechanical Engineering but their pursuit of engineering began long before they chose to come to Kettering.

Before they started a family tradition at Kettering, the Shumaker family first embedded themselves on a FIRST Robotics team, Team 2137 - TORC, at Oxford High School in Oxford, Michigan. Even their parents - Kent and Kim - got involved.

“From January to April, our whole life pretty much revolved around robotics,” Kent Shumaker said.

As Cole Shumaker’s role grew with the team so did Kim Shumaker’s involvement. She began by assisting with travel plans and fundraising and later assumed sponsorship raising duties. Starting in summer 2011, she became the Main Contact for TORC and led the team to further develop its structure, expand its activities, and achieve financial sustainability. Kent Shumaker believes that she saw a need for organization and felt that she could fulfill that role.

“Our main leadership stepped down and I was inspired enough to accept the role,” Kim Shumaker said. “My efforts focused on documenting who we are as a team, building financial sustainability, and empowering students as team leaders and decision makers.”

As Cole Shumaker approached high school graduation and began planning for his university career at Kettering, Titus Shumaker continued the family tradition in FIRST Robotics on Team 2137 - TORC. Unofficially, he had been traveling with the team since seventh-grade but officially became a member of the squad in his freshman year of high school.

“I got involved in FIRST my freshman year of high school,” Titus Shumaker said. “I like that you are given a challenge at the beginning of the season and you have six weeks to make it work. I enjoyed the design aspect of it the most.”

Andrew Shumaker became involved with FIRST after Cole Shumaker graduated. Andrew Shumaker assisted TORC as they prepared their first Chairman’s Award submission, which they won. Andrew Shumaker has since served as a judge with his mother Kim Shumaker several times at the district competitions at Kettering during the spring.

The experiences in engineering, design and collaboration took Cole Shumaker and Titus Shumaker to Kettering where their brother Andrew was completing his undergraduate and graduate degrees in Mechanical Engineering and Operations Management respectively.

Andrew Shumaker’s final college choice was between The Ohio State University, his father’s alma mater, and Kettering. Ultimately, the co-op opportunity at Magna Seating in Novi proved to be the difference as Andrew selected Kettering. Unbeknownst to him at the time, his decision set forth a path for his younger siblings as well.

“With me being here, they knew what Kettering had to offer,” Andrew Shumaker said. “It wasn’t just a matter of jumping on the bandwagon. They saw the benefits and positive impact that Kettering was having on my career.”

Cole Shumaker is completing his co-op at Webasto Roof Systems in Rochester Hills. Immediately after graduating from Oxford High School, Titus Shumaker worked for General Motors at the Warren Tech Center where he gained project management experience. He has since decided to get closer to design aspects of engineering by  began working for NLB Corp in Wixom, Michigan. Both credit their involvement in FIRST Robotics in high school for easing their transition to Kettering and securing co-op employment.

“A lot of the skills from FIRST translate over to Kettering,” Titus Shumaker said. “It helps you understand how things work and the thought required to translate designs to products.”

Kim Shumaker was recently re-elected to the Oxford Community School Board. In her second term she remains highly supportive of both robotics and the relationship between Oxford Community Schools and Kettering. Her involvement at Kettering and the Oxford schools has led to college credit being offered at Oxford High School and Oxford’s Virtual Academy presence onsite at Kettering. She shares the benefits of robotics and pre-college programs at Kettering with others, as both of those opportunities provided invaluable experiences for Cole Shumaker and Titus Shumaker.

“Students in Oxford Community Schools are required to take the pre-engineering courses at Oxford Middle School and then have the opportunity to take PLTW engineering courses and/or college level engineering courses as part of the Oxford Engineering & Technology Academy at Oxford High School,” Kim Shumaker said. “These courses combined with the FIRST robotics experience produce students that are a perfect fit for Kettering University and its co-op program. They can hit the ground running their freshman year and can earn many scholarships that make a degree at Kettering as affordable as other competitive universities in and out of Michigan.”

There’s also a fourth Shumaker brother who neither participated in FIRST Robotics nor attended Kettering. In high school, he focused on soccer and wrestling which sometimes caused Kent and Kim Shumaker to go back and forth between wrestling meets and robotic builds. Cody Shumaker graduated in 2016 with a degree in Zoo and Wildlife Biology from Malone University in Ohio. Cody is employed at the African Safari Wildlife Park in Port Clinton, Ohio where he works with animals ranging from bison to giraffes, monkeys and camels.

“I wouldn’t say that I felt left out,” Cody Shumaker said. “In the winter time, their life was robotics. When I would come home from school, conversations were about robotics.”

“I would often have to tell them, no more robotics talk,” Kim Shumaker said.

Now that Titus is in his sophomore year at Kettering, Kent, Kim, Cole and Andrew Shumaker are transitioning from their previous roles in FIRST Robotics at Oxford High School. Kim Shumaker is no longer the Main Contact but remains the Sponsorship Mentor. She’s now assisting other FIRST teams at the FIRST Robotics Community Center at Kettering by conducting consultations and organization workshops. Kent Shumaker is still involved with TORC but he now shares the mechanical lead mentor role with Cole Shumaker.

Both Kent and Cole intermittently help teams currently housed in the FIRST Robotics Community Center on Kettering’s campus as well. Titus Shumaker volunteered at the center over the summer and hopes to assist during the build season in January 2016.

“You may think it’s unusual for so many family members to be involved in the same activity (FIRST) and school (Kettering University), but the growth and opportunities available to my children was outstanding. I haven’t seen anything that comes close to preparing them so much for their careers,” Kim Shumaker said. “I saw them develop discipline and they learned how to stick to things that were difficult and challenging. When you see that, you want to become involved and share it with others.”