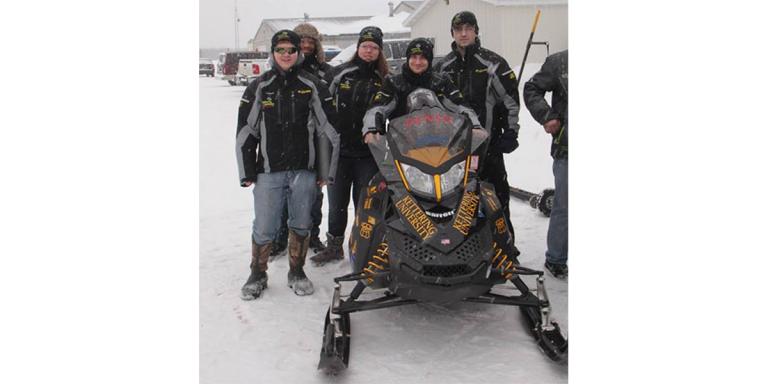 “By the time we realized we had a problem, they sealed our hood so basically we had to run the entire competition in a lower power mode than we were planning on.”

A rivalry is brewing between Kettering University and its Midwestern counterparts competing in the annual Clean Snowmobile Challenge at the Keweenaw Research Center at Michigan Technological University. Kettering, the 2014 defending champions, were ousted from the top spot but fell back just one place in the standings, finishing in second place overall in the 2015 competition. In the last three years, Kettering has now finished second, first and second respectively in the competition.

“We had a software glitch that didn’t allow us to produce as much power as we wanted,” said Dr. Greg Davis, professor of Mechanical Engineering and faculty advisor for the clean snowmobile team “By the time we realized we had a problem, they sealed our hood so basically we had to run the entire competition in a lower power mode than we were planning on.”

Despite the challenges that unexpectedly arose, Kettering was honored with best fuel economy, quietest snowmobile, lowest in-service emissions and most practical design awards on their way to a second place overall finish. This marks the second consecutive year that Kettering has been given quietest snowmobile and most practical design awards. The team’s consistency is a credit to the processes in place that allow successive team leaders to share and pass down information and leadership responsibilities each year.

“Partly, as faculty advisor, I keep the institutional knowledge and I try to facilitate passing it on,” Davis said. “I try to get my new team leaders to pass on the information to the next person in line. I think we have been pretty successful at that.”

The snowmobiles are judged on engineering design, cost, sound, handling, emissions and fuel economy. The fuel economy is measured on a 100-mile trail ride from Houghton to Copper Harbor where the snowmobile must maintain a minimum speed of 45 miles/hour in performance events, however, the sled can effortlessly reach speeds above 60 miles/hour.The University of Wisconsin-Madison was named the overall winner of the 2015 challenge.

The Kettering team has already begun brainstorming for next year’s competition as they hope to regain their crown while making significant changes to the engine in order to provide a new challenge for next year’s students.

“We are contemplating going from a gasoline engine to a diesel engine,” Davis said.  “We only look to go so long with an existing engine strategy because we want to create new challenges for our students. We are looking at making a fairly major change between this year and next year.”