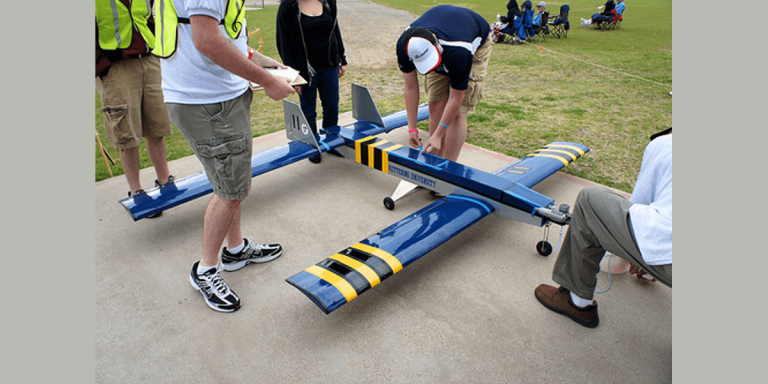 In its second year of existence on campus, Kettering University’s SAE Aero Design team (Team #11, “Terrific Tandem”) placed 10th out of 34 teams in their class at the 2011 Aero Design-West competition in Fort Worth, Texas.

The purpose of the competition is to design and build a remote controlled (RC) aircraft capable of lifting as much weight as possible within given design parameters. These parameters include a 225-inch total length-plus-width-plus-height limit, and a specific engine to power the aircraft.

The overall score for each team is separated into three parts: the Design Report, Technical Presentation and Flight Score.  With stiff competition in recent years, a team must have high scores in all three categories in order to win.

The Kettering team opted for an unusual design this year – a tandem wing aircraft, where two similarly-sized wings are offset horizontally along the aircraft, rather than vertically as in a biplane.  “This design provides much more stability to the aircraft, which was clearly evident at the competition,” according to Jacob Crabill, team member.

“The Terrific Tandem flew absolutely spectacularly in all conditions,” Crabill added, “including in up to 30mph winds. Many teams commented on both the unique appearance of our aircraft and its stability in flight. One long-time faculty advisor said the Terrific Tandem was, in fact, the best-flying tandem aircraft he had ever seen flown at an Aero Design competition.”

For the first several rounds of flight, Kettering was within the top five teams in terms of flight score, and well within the top 10 in terms of overall score.  By the end of the first day of competition, the Kettering team met their goal of lifting at least 20 pounds of payload successfully (20.73 pounds to be exact), with an additional un-scored flight (due to an over-limit takeoff) with more than 23 pounds of payload.

Due to a top-ten finish, Kettering now has bragging rights in the form of a guaranteed team number for the 2012 competition. “Be sure to root for Team #10 – and our Terrific Tandem 2.0 – next year at the competition in California!” Crabill said.