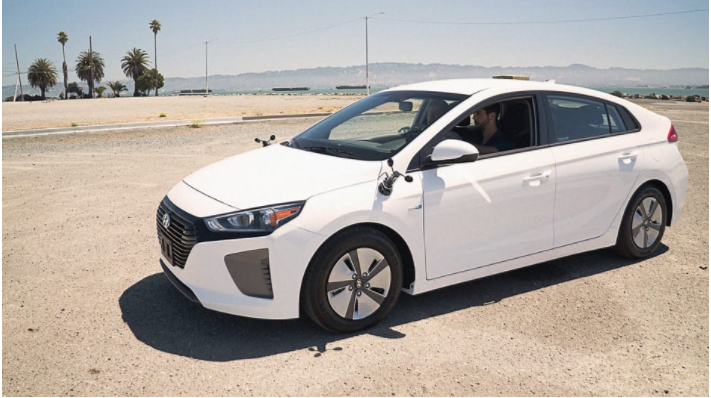 “Kettering ultimately made me a busybody, more of a doer instead of a dreamer.”

Ryan Ayler ‘15 had a unique experience after graduating from Kettering University.

John Suh ‘90, the chief executive officer of Hyundai Ventures, offered him a two-year job that would essentially serve as an extended capstone where Ayler could learn and network in the Silicon Valley.

Ayler was chosen as the engineer in the Los Angeles County Museum of Art and Hyundai Venture’s Art + Technology project. The project partnered Los Angeles artist Jonathon Keats with Ayler to study human interfaces with computers. Keats had the idea that the vehicle of 2020 isn’t driverless, but driver-full, Ayler said. Instead of removing the driver, available technology could immerse drivers in the car.

Keats decided to use audio feedback as a way to “feel” how the car works. A programmed microcontroller read values through a diagnostic port.

“They offered the most experience for the amount of work in the allocated time,” Ayler said.

Ayler came to the project with a Mechanical Engineering degree, but had to learn programming.

“I did a lot of Googling and a lot of research,” he said. “I accomplished whole project with ambition and resourcefulness.”

“Time seems to warp as soon as you hit the city,” Ayler said.

As you drive out of the city onto an expressway, the beats per minute increase and your heart beats faster along with it.

They also created an algorithm for efficiency. For example, if the car is moving faster than 50 miles per hour and the RPM is faster than 3,000, the music becomes distorted. Anemometers mounted on the car measured wind speed. As the air flows faster around one side of the car, the left-to-right balance in the speakers shifts to where the air is flowing.

Ayler could have accomplished the goals with software, but because he’s an engineer, he chose a mechanical solution. He coupled programmable servo motors to get data points. They were connected to a midi controller, which were in turn connected to the car’s algorithms.

“It was an esoteric, weird conceptual project,” Ayler said. “It taught me there’s not one thing in the world I can’t build if I put my mind to it. It stretched me way outside my comfort zone.” 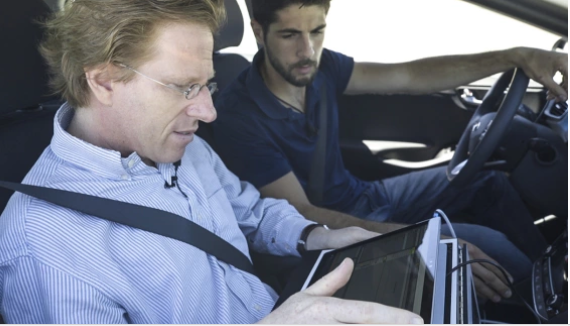 Ayler doesn’t believe the technology will go in future Hyundai vehicles, but he believes there’s a place for sensor technology in cars to make commuting safer, warmer and more fun.

Sensors could cue soothing music when a driver’s heart rate increases, release embedded aromatherapy or adjust a seat to help calm and relax a driver during traffic jams or stressful conditions. All of it can be done with a computer chip in the vehicle, he said.

“You can make new user experience and human-to-vehicle interfaces with current technology,” he said. “It needs artistic mind to understand stresses of everyday life and go through the design process to create new concepts.”

A video about the project aired on the Discovery Channel show “Daily Planet.”

After leaving Hyundai Ventures in September, Ayler started at Origin Labs in October. The company is making industrial 3D printers to sell to manufacturers.

Ayler, who worked at Tesla during his co-op, learned to remain nimble and remain outside of his comfort zone. He advises students to plan five steps ahead and have 18 backup plans. For students interested in entrepreneurship, he advises them to focus on the problems in their life and use the student body, faculty members and the T-Space to innovate solutions.

“Kettering ultimately made me a busybody, more of a doer instead of a dreamer,” he said.

View a video of the project.