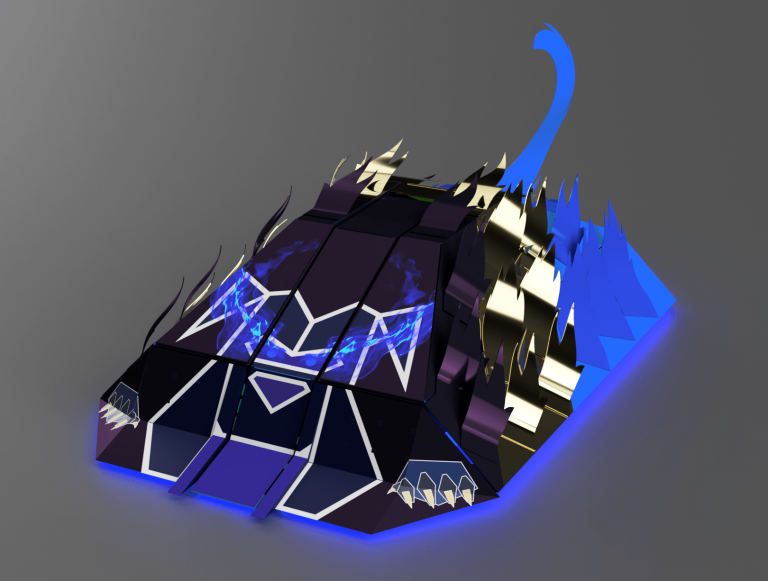 “In the future, we definitely plan on applying for ‘BattleBots 2022’ with a new and improved robot. It’ll be a lot of work, including having to make a new video, but with some experience under our belts and a love for the competition, we’re up to the task.”

Kettering University’s Combat Robotics Team ultimately wasn’t selected for the 2021 season of “BattleBots,” but the team has set their sights on securing a spot on the 2022 season of the Discovery Channel’s hit show thanks to the experience they gained auditioning this year.

“‘BattleBots’ was very receptive to our team and robot, and mentioned they would like to see us apply to compete on ‘BattleBots 2022,’” said Nicholas Lipcsik (’24, ME), team president. “Now, we’ve got resources such as our own build room, access to University resources such as a machine shop, welding equipment, a plasma cutter, a CNC mill, funding to build our own 250-pound combat robot and the support of the University and alumni as we continue to grow and advance our dreams of competing on ‘BattleBots.’”

The Combat Robotics Team has been meeting since October 2019, and submitted its completed application package and admission video at the end of February 2021 to the Discovery Channel. Hundreds of teams applied to be on the 2021 season, leaving some teams that had previously competed on the show to also be rejected, Lipcsik said.

“The feedback that they gave us was that they would like to see prototypes of our unique design elements such as the swerve drive and pneumatic launcher with a locking mechanism to prove that our design can meet our expectations and create entertaining fights,” he said.

They also asked that the team keep the Discovery Channel updated on the robot’s progress in case one of the selected teams can’t compete.

As for now, the team plans to continue to build its 2021 robot, Mad Dog, which will weigh about 250 pounds and be 4 feet long, 1.5 feet wide and 1 foot tall. Each wheel will be independently controlled so that the robot can face one way and move a different way. It also will feature a lifting mechanism to flip its opponents.

“As a team, we’re using this time to not only continue to improve our technical skills, but also take a step back and assess our team’s strengths, weaknesses and all of our potential opportunities for growth as an organization,” Lipcsik said. “In the future, we definitely plan on applying for ‘BattleBots 2022’ with a new and improved robot. It’ll be a lot of work, including having to make a new video, but with some experience under our belts and a love for the competition, we’re up to the task.”