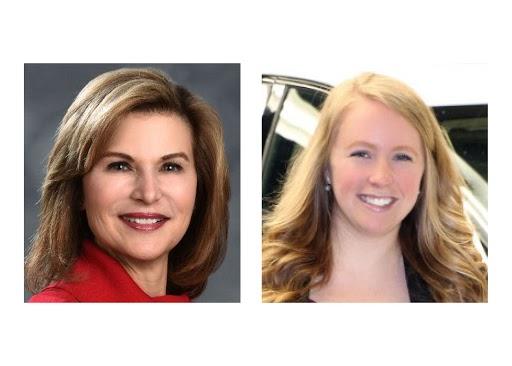 Carla Bailo (’81 ME) and Kayla McDonell (’12 ME) may have walked the halls of Kettering University decades apart, but have more in common than they realize.

The pair, who both found love at Kettering and share a passion for the University, will host this year’s virtual Evening of Distinction and Determination. The event, which honors the University’s decorated alumni and high-level donors, will be at 7 p.m. Thursday, Oct. 22.

As the Vice President of Alumni Awards on the Alumni Board of Directors, McDonell said she had invested a lot of time into the event and hosting was a great way to see all of that work come to fruition.

“I had the privilege of leading the selection committee for the award winners, so I’m most excited about honoring those candidates because they are all really incredible,” she said.

Both women agree that having a virtual event should expand the reach so more people can attend.

“You don’t need to travel or find a babysitter,” McDonell said. “You can join from home. It’s a great opportunity to support our alumni who are out there killing it in their industries. We are an elite group of alumni, a small group, so it’s important to be there for each other.”

In addition to applauding fellow alumni’s achievements, Bailo said attending the event could give people tips on what they should do in their careers or a chance to make new contacts.

Though the pair has never met in person, they do have some strong connections.

Bailo’s husband, Clark (’81), is one of the alumni honorees. He also was president of the Kettering/GMI Alumni Board during the same time McDonell was honored with the board’s 2017 Young Alumni Award. In McDonell’s eyes, this brings things “full circle” that she gets to present his award to him with his wife.

As for Bailo, she said she would have hosted even if her husband wasn’t honored, but it does make her duties a little more special.

“It’s kind of like embedded in my heart,” Bailo said about her connection to Kettering. “That’s the only way I can describe it. It was, for me, an education that was unparalleled and it still is. It gave me all of the fundamentals that formed my successful career, and I really want other students and other young people to be able to benefit from that same kind of learning experience.”

McDonell said Kettering is a great place for students to come into their own because, for her, “Kettering means acceptance.”

“It’s home to students from all different walks of life, different backgrounds, raised on different ideas, different countries,” McDonell said. “It’s also a great place for growth and changes as you’re progressing through your students and just life in general, as there’s a very welcoming feeling on campus for everyone.”

Kettering has progressed in many ways over the years by offering the latest technological advancements and continuing to update its facilities, McDonell and Bailo both noted, but the caliber of education and students hasn’t.

“Kettering has such a high standard, and I think that hasn’t wavered, which is phenomenal,” McDonell said.

Small class sizes, individual learning and the Co-op experience all add to the “excellence of education” the University continues to provide, Bailo said.

While both credit their career success to the foundations started at Kettering University, there was one other thing the pair found — love. Both Bailo and McDonell met their now-husbands while attending Kettering.

Bailo said some of her favorite memories were playing pool in the basement of the Campus Center, the spot where she met her husband, Clark.

“That game wasn’t my favorite,” she said with a laugh. “We were winning every game and suddenly, when my husband-to-be showed up and took over as the partner of the person we were playing, then we lost.”

McDonell met her husband, Josh (’11), during the Outdoors Club white water rafting trip in West Virginia her junior year. She spotted him the first night at the camp fire with some mutual friends, she said.

“To see someone I didn’t know was exciting, so I walked up and introduced myself,” she said.

They remained friends for the remainder of her 1.5 years left at Kettering, but when she was packing up to move out, he invited her out with friends where he asked her on their first date, McDonell said.

Yet, there’s still one more connection between McDonell and Bailo. Bailo’s son is married to a woman with whom McDonell went to high school.

“I was invited to Carla’s son’s wedding, but we lived out of state, so we couldn’t make it,” McDonell said. “We’re weirdly intertwined, but I don’t think we’ve met in person yet.”

That day will come at the Evening of Determination and Distinction, which they both said they are looking forward to.

“I’ve heard nothing but phenomenal things about Carla and how wonderful and successful she is,” McDonell said.

Learn more about the co-hosts as well as the award recipients at kettering.edu/eveningofdistinction. While there, RSVP to attend the 2020 Evening of Distinction and Determination at 7 p.m., Thursday, Oct. 22.