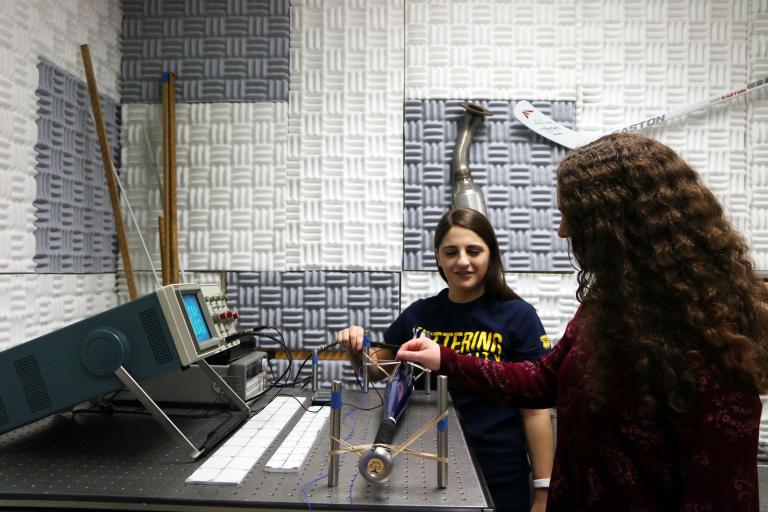 This year, Kettering University students gave back to their communities in meaningful ways, worked on a NASA spacecraft, made 30 Under 30 lists, and more.

Read more about what students accomplished and their experiences at the University:

Noah Lukins ’19 and his thesis advisor, Dr. Laura Sullivan, designed, developed, and installed a photovoltaic system that powers a rain harvesting/water pumping system and ventilation system for the greenhouse on the Pine Ridge Reservation in South Dakota. The greenhouse is located at the Singing Horse Trading Post on the reservation, so access to a properly working greenhouse will benefit the community. Read more.

Kettering University students and faculty members are working with the Flint community to make a difference. Thanks to a Ford College Community Challenge grant, students are partnering with community organizations in Genesee County to help with biology- and chemistry-related projects. Read more.

Joel Hurd ’20 accepted into Forbes Under 30 Scholars Program, which allowed him to attend the Forbes Under 30 Summit in Boston. He also attended the 2018 Harvard Summer Venture and Management Program. Read more.

Kettering University students are testing equipment on the Orion Spacecraft, the NASA space vehicle built to take humans as far as Mars, during their co-op at Deep Space Systems in Littleton, Colorado. Read more.

Andre Dusek ’22 brought a lot of practical experience with engines to Kettering. He started rebuilding his first car—a Honda Civic—at age 14 and eventually turned it into a drag racing car with a 500 horsepower turbocharged engine. Read more.

Ruth Willet ’21 has always been fascinated with Morse code and became a licensed HAM radio operator. She started an Amateur Radio Club on campus in the spring 2018 term to get more students interested. Read more.

Willet was awarded the Radio Club of America’s Young Achiever Award, which allowed her to attend the International Wireless Communications Expo in Orlando. Read more.

Alex Rath ‘17, ’18 dove further into his education at Kettering University as a graduate student and took the lead on the Society of Automotive Engineer’s AutoDrive, a three-year autonomous vehicle competition. Read more.

Hannah Kuperus ‘22 didn’t want to join FIRST Robotics as a middle schooler, but now robotics is her future. The Mechanical Engineering student is a FIRST mentor with a passion for machining and manufacturing. Read more.

Shobit Sharma ‘18 knew Kettering University would set him up for success not only for his graduate studies, but in his career. He believed it so much that he traveled from India to Flint, Michigan, to make his dreams a reality. Read more.

Alexander Calderon ’19 has a particular interest in the quirky, practical Toyota Celica. The Mechanical and Electrical Engineering major was so interested in the classic Celica that he started a Celica Club in the San Francisco Bay area. Read more.

Mia Jonascu ’18 and Carley Holmes ’19 are working as scribes at the county Medical Examiner’s Office where they assist with autopsies and the office’s information management system for their co-op. This is one of the first morgues in the state that uses scribes. Read more.

Before Devin Wojcik ’22 came to Kettering, he competed for a season in the Cooper Tires USF2000 Championship Powered by Mazda, a development series for the Verizon IndyCar series. At the end of the season, Wojcik was awarded the Tilton Hard Charger Award, an award that goes to the driver who makes the most passes, gains or positions during the racing season. Read more.

When Shuang Liu ‘18 traveled more than 7,000 miles from China to Kettering University, she learned far more than what was taught in the classroom. Liu, who came to Kettering to earn her Master of Business Administration, is the first student to successfully complete Kettering’s English as a Second Language Program. Read more.

Kettering University wasn’t always the top choice for Kenna Gebissa ‘18 when he first chose where to go for college, but once he transferred here he knew it was the perfect place for him. Kettering gave him a sense of belonging, and he felt more genuine connections than at a larger university. Read more.

A mother and her three children took different paths to Kettering, but all four of them have graduated or will graduate from the University. Read more.

From the day Alex Irwin ‘21 started his co-op at Hyundai Mobis, he was given projects dealing with artificial intelligence and autonomous technology. Kettering University gave him the opportunity to be treated as a professional working in the industry as a college freshman. Read more.

When Kyle Spengler ‘19 wanted to find the best solution to a problem with hip replacement surgery, instead of simply compiling data and information for a group project he took it a step further. He 3D printed a femur to use hands-on experience to solve a real-world problem. Read more.

Laura Izquierdo ‘21 decided to merge her passions for art and science when she started at Kettering University. Even though her major is Computer Engineering, the hobbies and clubs she is involved in revolve around the arts. Read more.

Kettering University students learned how to design and successfully use 3D printing to improve scientific instruments and problem solve in a pilot course. Students also created art projects through 3D printing to test their design and creative skills. Read more.

Kettering University’s Physics Club members were thrilled when the weather balloon they designed, built and programmed soared at an altitude more than 21 miles up in the sky. The balloon traveled more than 20 miles. Read more.

Twenty-four Kettering students in the pre-med program are American Heart Association-certified in basic lifesaving and CPR after attending a workshop at Covenant HealthCare Simulation Center in Saginaw, Michigan. Normally third- and fourth-year medical school students get the type of training Kettering Pre-Med students are receiving as undergrads. Read more.

The Pre-Med students continued their training at Covenant’s Simulation Center and learned to recognize signs of heart attacks and strokes. The workshop was one of eight workshops designed specifically for the students to learn hands-on medical training for various emergency situations. Read more.

Kettering students are volunteering at Hurley Medical Center’s Hospital Elder Life Program to care for patients who are 70 and older to prevent delirium. The program gives students an opportunity to practice hands-on care as undergraduate students. Read more.

Kettering University is home to a new chapter of Alpha Chi Sigma, a professional chemistry fraternity, two years after students started the process to create a chapter. The fraternity offers friendship and volunteering opportunities among students studying chemistry and who plan to pursue a career in fields related to chemistry, including biochemistry, applied biology, and chemical engineering. Read more.

The Kettering Entrepreneur Society supported students who are creating products by offering grants regardless of whether students want to start a business. Read more.

Members of the new Kettering chapter of the Association for Computing Machinery–Women want to attract more women to the Computer Science and Computer Engineering programs at the University. Rachel Wyatt ‘19 and Sally Dagher ‘18 started the chapter in spring 2018, and it’s already grown to more than 20 members. Read more.

The Kettering University SAE AutoDrive team finished in fourth place overall and received five awards at the conclusion of the inaugural competition on May 5 in Yuma, Arizona. The AutoDrive Challenge is a design engineering collegiate project partnered between and administered by SAE and General Motors. It focuses on reaching SAE Level 4 of autonomy using a Chevrolet Bolt EV vehicle donated by GM. Read more.

The Kettering University SAE Baja Team was thankful for its preparation in snow and ice as the extra practice helped them secure a third place finish at the Michigan Tech Winter Baja Competition. The team improved from its ninth place finish in 2017 and received the trophy for the fastest lap. Read more.

Kettering University’s Shell Eco-marathon team left their second Americas competition with a third place finish, building on their experiences and lessons from their first competition last year. The Electric Bulldog team was one of 100 teams that participated April 18-22 at Sonoma Raceway in Sonoma, California. Read more.

Kettering University’s SAE Aero Design team was proud to see their plane in flight during a successful run at the SAE Aero Design West Challenge. The team placed 23rd out of 36 teams in their class during the challenge, held April 6-9 in Van Nuys, California. Read more.

Kettering University students tackled the question “How do you create new jobs when white collar jobs have been displaced due to automation?” in a new competition sponsored by the Hyundai Center for Robotic-Augmented Design in Living Experiences. Read more.