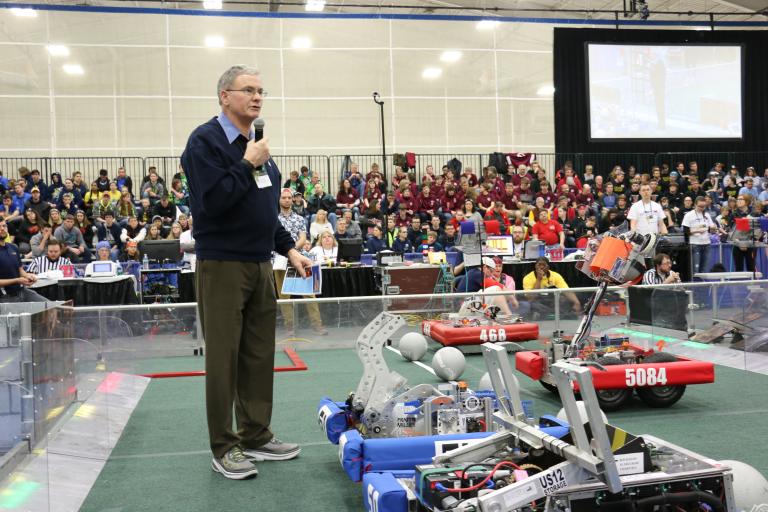 His last day was June 30, but the University is honoring him with a retirement celebration from 3 to 5 p.m. July 15 in the FIRST Robotics Community Center.

To say the FIRST Robotics Community Center Director has worn many hats at Kettering is an understatement. During his time at the University, Nichols has worked in 14 different roles. 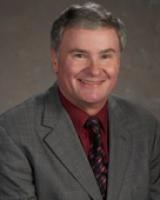 “I’m going to miss it,” Nichols said. “I’m passionate about what I did here. I can’t believe people work somewhere where they don’t enjoy what they do. That’s why I was still here. I’m 71; I could have retired a long time ago.”

Nichols graduated from Kettering (then known as General Motors Institute) in 1974 with a Bachelor’s degree in Industrial Administration. After graduating, he worked at and eventually owned a hardware store until he returned to Kettering in 1983 as a corporate sponsorship manager. General Motors had divested itself of ownership of the University the previous year, and the University wanted to increase its co-op partners.

“There were 12 companies [in the co-op program] outside of General Motors when I started in 1983,” Nichols said. “It’s been a great experience for me. I’ve had three opportunities to start something from scratch here. There were three or four of us in the department at the time. We were able to build a marketing plan and get companies on board.”

“We weren’t competitive with other schools at the time,” Nichols said. “I was asked by John Lorenz, the provost, to start what is now academic affairs.”

Of all the jobs he’s had, Nichols said his favorite was his last position leading the FIRST Robotics Community Center.

Nichols brought FIRST Robotics to Kettering in 1997 when the University sponsored a team from Powers High School. Under Nichols’ leadership, the University began hosting two robotics competitions a year. Managing the robotics program was a second job to his other University roles until 2014, when he was named director of the FIRST Robotics Community Center.

“When I sponsored that team, I had no idea it could lead to where it is today,” Nichols said. “We’ve grown from two scholarships to 72 this past year. I think once I saw a FIRST competition, that sold me on it. I saw the potential, but I never realized how far it would grow to what it is today.”

At the time of its opening, the FIRST Robotics Community Center was the only one of its kind on a college campus. Since then, Nichols said he’s given many tours to others.

“The whole center has spread across the country,” he said.

Regardless of his role, Nichols left his mark on many. When the University asked the Kettering community for Bob Nichols stories, people answered. They spoke about how he helped them when they were students and they couldn’t find a job or navigate campus life, or as a colleague who did anything he could to help.

“Bob is one of the most giving and community-focused individuals I know,” said Elizabeth (McLean) Taylor (‘14, ME). “He genuinely cares about all of those he works with and their success. As a student, I always appreciated having an advocate and a friend on campus through my time with Bob in the Robot Society. As an alumna, I reached out to Bob when we began building a STEM outreach center in Milwaukee for advice and guidance. Bob hosted us at the Kettering [FIRST Robotics] Community Center without hesitation and shared everything from best practices to safety training and user agreements. Opening a facility such as this is daunting, and Bob made everything feel a little less overwhelming!”

Academic Advisor Susan LaFeldt recalled a time when Nichols as vice president of enrollment management was her boss and she discovered that he kept track of everyone’s birthdays so he could deliver a card to them.

“That one kind gesture had a huge impact on me,” she said. “An executive leader did this on his own to make his people feel appreciated. It meant a lot to me to think he cared about his employees as individuals by remembering their special day. This is a rare trait to find in a leader of that level. He taught me a lot about being nice to everyone you encounter. I’ll miss his smiling face and hearty laugh.”

Austin Schmitz (’22, ME) has many memories of Nichols, but his favorite was his induction into the Robot Honor Society.

“From when I was a freshman through now, I’ve had some great conversations with him regarding leadership, character, service and random Robot facts he’d be more than happy to tell me about,” Schmitz said. “From freshman year, I had the goal of becoming a Robot, and [Nichols] helped me along the way by giving advice, offering suggestions and hiring me on as a work-study student. At my induction, he told me that he was very proud of me and knew he’d see me there at one point, and I couldn’t be happier than to have had him there for it. Bob is an outstanding person, mentor and FRC trivia expert.”

Abhishek Banerjee (‘06, EE) wouldn’t have made it past his first week at Kettering if it wasn’t for Nichols.

“It was my first week freshman year in 2002. I was overwhelmed. New country, new culture, an unknown education system and the prospect of having to look for a co-op job as an international student while keeping my grades airtight and high. My father and I had a conversation and did not put the idea of going back entirely away from our minds,” Banerjee said. “Bob met us and had nothing but words of encouragement and care. I’ll never forget that first week when Bob was very helpful and kind. My parents left a couple of days later knowing I was in good hands. I gained back confidence and started freshman year on a high note.

"When faced with the idea that we were contemplating going back, Bob said, ‘Oh nooo, you’re not going anywhere!’ I remember his facial expression till this day. Fast forward to today, I’m married, live and work in Houston, Texas, and I recently became a permanent resident of the United States. The Kettering Co-op Program and education system, coupled with people like Bob Nichols, is a class apart and a niche as it should be.”

Others told stories that described Nichols as an amazing mentor, always willing to help, kind, generous, encouraging,  and the “epitome of gracious professionalism.” But, there was one sentiment that perfectly summed up Nichols.

“There is no single story,” said Larry Navarre, lecturer in the School of Management. “However there is a theme. Bob has always treated everyone with grace, compassion and a can-do spirit. He has always conducted himself with the concerns of others in mind as he works to find a solution that pulls people together and carries us all forward.”

Now, Nichols looks forward to spending time with his wife of 48 years, his two kids and two grandkids.

“I’m not looking for another job. I’m at the age where it’s time for me to leave,” he said. “We have a campsite in west Byron that’s all set up and waiting for me to come out there.”