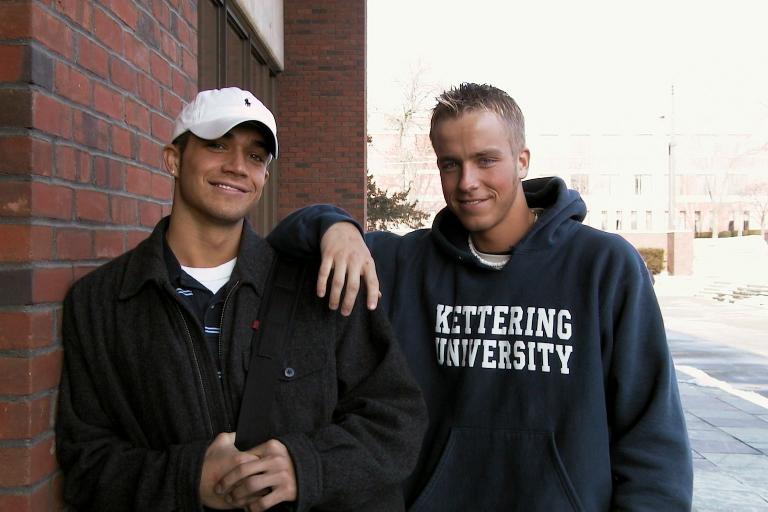 Eric Ernst, 19, and Shaun Carrithers, 19, came to Kettering as accomplished athletes from Lapeer. Both are doing well academically despite a tough Mechanical Engineering curriculum and both joined the same fraternity - Delta Tau Delta.

Some say the roommates even look like brothers. About the only difference these days is Carrithers works at a co-op at General Motors in Pontiac while Ernst's co-op experience is currently at Donnelly Electronics in Grand Blanc.

What's the secret of being closer than brothers for years? "We don't try," said Ernst. "It just falls together."

"It does take understanding," Carrithers added. "How can anyone know what's going on in another person's day? It takes a good balance with friends, girlfriends, family, school " all of it."

"We're both fortunate to be here at Kettering," continued Carrithers. "Our friends who went to public universities don't have the co-op opportunities we're enjoying. GM is a really cool place to have a co-op," he said, teasing Ernst to switch to GM.

Less than two years later, the Lapeer duo are drawing acclaim from faculty members like Chemistry Professor Reg Bell, who considers them "superstars." "They are two of the finest students I've ever met," Bell said.

Carrithers is focused on campus service. He has been elected sophomore class representative for student government and is public relations chairman for their fraternity, Delta Tau Delta.

"We are well on our way to come out of here with very good academic standing," Carrithers said. "I'd definitely like to pursue an MBA at a school with the same prestige as Kettering, such as Harvard or Stanford. With the knowledge we will obtain at Kettering University, the sky is the limit."

Ernst's plans are more decided. "I'd like to get my master's from Kettering and pursue an MBA at an Ivy League school."

Not surprisingly, they'd both like to participate in the University's Study Abroad program and are planning to study in Germany during the fall of 2003 " together.

"Kettering throws so much work at you in 11 weeks. You learn how to handle the workload," Ernst said. Added Carrithers, "We're trained to deal with the tough situations. All it takes are good skills."