SCUDEM is a mathematical modeling competition in which students used advanced knowledge of calculus and differential equations to simulate real world problems.

Devin Binelli ‘18, Leonard Korreshi ‘18 and Peter Morell ‘19, Mechanical Engineering and Applied Mathematics majors, had eight days to create and test a basic mathematical model to quantify how social factors can predict the way people form groups in society. The students also had to write a two-page executive summary explaining their procedure.

The team wasn’t given time limits for the problem, and it was a challenge to work on the problem between classes and other obligations, Korreshi said.

On April 21, six teams from across Michigan met at Lawrence Tech and were tasked with analyzing their model and giving a 10-minute presentation of their mathematical model to a panel of judges. The Kettering team took the top spot among six teams in Michigan and was the only team to earn an “Outstanding” score, Korreshi said. He noted the team’s presentation went well and the students were able to satisfactorily answer all of the judge’s questions. 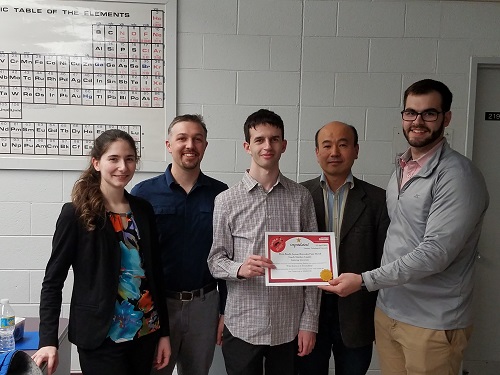 Korreshi and Morell also had top scores in a math bowl at SCUDEM.

Morell said the competition was a great opportunity to push the limits of the students’ mathematical abilities. Working as a team was more difficult than working alone, he said, but it replicates academics and research.

“There is no correct way to construct a problem or model. You can't look that up,” he said. “All you can do is wrestle with it; that's what really shows how well you understand the concepts and mechanics of the mathematical principles.”

Binelli enjoyed solving a problem she doesn’t see in her regular coursework.

“This experience emphasized to me that effectively communicating great ideas is equally as important as the idea itself,” she said. “The presentation of our solution was a key factor in our victory.”

Causley said the students showcased their mathematical training and developed a great appreciation for math modeling and its utility in the real world. They worked as a cohesive team to do a lot of work in a short time.

“Our students are some of the most well-trained and industrious students out there, and Kettering has an exceptional math program,” he said.