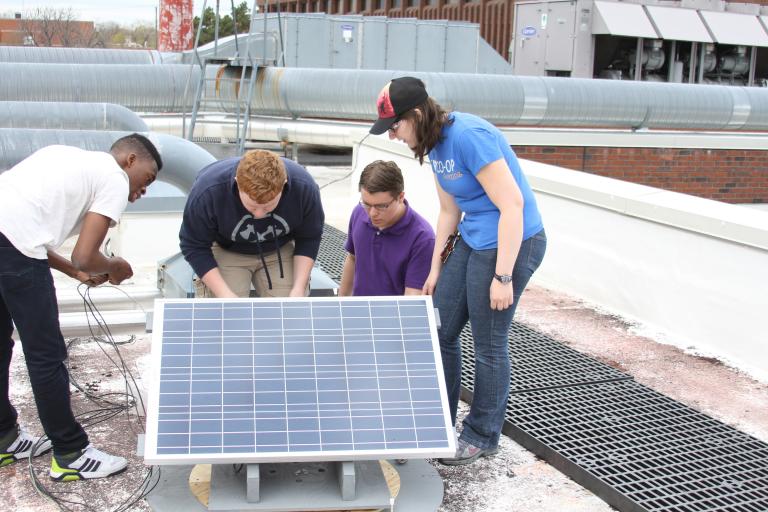 “I saw GEO as a club on campus that could help enhance research I was interested in, so I wanted to be a part of the group.”

The roof of Thompson Hall is currently serving as the setting for an experiment in solar power by Kettering University’s Green Engineering Organization (GEO).

Students are determining whether a solar panel with a tracker attached performs significantly better than a panel without a tracker.

“There is added capital and maintenance for a tracker,” said student Jacob Lucia, vice president of the club. “We’re trying to determine if the cost of the tracker is worth it.”

GEO is a student organization that works on green initiatives and awareness on campus. The group meets weekly and completes a project each term.

“We try to complete a green engineering project each term,” said Akeem Sulaimon, president of the club. “Usually our projects depend on specific interests of the group members.”

Personal interest is exactly how the GEO club began the solar panel study. It started as a personal project for Lucia, then after he joined GEO last year, the added abilities of other group members allowed him to expand the project.

“I saw GEO as a club on campus that could help enhance research I was interested in, so I wanted to be a part of the group,” Lucia said.

The varied backgrounds of group members typically expand the scope of projects they are able to take on. In the past, they’ve had group members from Electrical and Computer Engineering, Mechanical Engineering, Chemistry and Biochemistry.

“It definitely enhances our projects,” Sulaimon said. “Having diverse majors and backgrounds lets us do bigger and more complicated things.”

The group built mounts for the current solar panels on the roof of Thompson Hall and did the programming and electrical work to hook up the tracking device. They routinely monitor the output of the panels and plan to continue tracking results until at least the end of the term and maybe longer. They will then do a formal presentation of their findings at a future meeting.

Sulaimon notes that one of the GEO club’s goals is to do more expansive projects in the future as the group grows. This solar panel project has the potential to grow into something bigger.

“We could possibly even do a solar farm -- all you need is vacant land or flat roofs, and we have both right around campus,” Lucia said. “We could do a solar-powered golf cart for facilities, or work with Engineers Without Borders to build hydroelectric stuff, for example.”

The GEO club meets from 12:30-1:10 p.m. every Thursday in Room A on the fourth floor of the Campus Center and the group is always accepting new members. For information, contact Akeem Sulaimon at sula7665@kettering.edu. You can also follow the group on Facebook, Twitter and Instagram.