Students, Staff Give Back by Cleaning Up Neighborhood

“You’ve got to give back to your community”

Volunteering hasn’t changed too much since the COVID-19 pandemic started for seniors Malachi Smith (‘22-CE)  and Curtis Bartz (‘22-EE) outside of wearing a mask and social distancing.

The same was true last month as the pair donned their masks and kept a respectable distance while they picked up trash in the field at Wolcott Street and University Avenue in Flint.

“You’ve got to give back to your community,” Smith said.

They were joined by about a dozen other staff and student volunteers as part of the efforts to beautify the area through the University Avenue Corridor Coalition. In addition to picking up trash, the volunteers also cleared debris from the sewer drains, cleared tripping hazards along the sidewalks such as weeds and overgrown grass, and cleared branches removed from an overgrown tree.

This particular event was a continuation of A-section clean-up in September with 28 students, staff, alumni, community members and GM CARES volunteers.

Clean-ups typically take place at least once a month with more in the summer, which started eight years ago.

The University Avenue Corridor Coalition is a collaborative effort of more than 80 stakeholders along University Avenue. The boundaries of the coalition are McLaren Flint on the west to University of Michigan-Flint on the east and from Hurley Medical Center/Whaley Children’s Center on the north to the Flint River and Chevy Commons on the south.

Some successes from the coalition since its inception include more than 100 clean-up projects, more than 10 homes repaired, more than 12 houses painted and more than 500 lights installed. Crime hotspots also have been cut in half, and membership of the coalition has increased by 340 percent.

“I think service and leadership are the core of what Kettering University is striving for in its students. While their education and preparation for careers is clearly something we provide with excellence, our mission at the University is very clear about the importance of service,” said Jack Stock, Director of External Relations. “I am especially energized and inspired by the fact that it is in my charge to provide, through my actions and dealings with students and the external community, the opportunity to demonstrate the importance of service throughout one’s life.

“As we tell the students, no matter where you go in life, it is so important to take responsibility for your community through action, through service. It is our civic duty in this country and, frankly, whatever life leads us. Kettering is modeling this on a daily basis, putting action into our words and, hopefully, shaping the lives of our students to make service and leadership lifelong habits.”

Stock said he works with the Student Affairs office to put the word out for student volunteers, but typically doesn’t have an issue finding help.

“Really, the biggest challenge is corralling the students at Kettering at one time,” he said. “They are exceedingly busy, but still willing to give their time freely.”

Junior Jeremiah Thompson (‘23-IE) helped break down large branches during Thursday’s clean-up. He said he often volunteers with his church, but recently has started doing more in the Flint community.

“I’ve been very community-oriented in the last couple of years, especially now with the state of the world we’re in,” he said. “I’m just trying to help people, in general.” 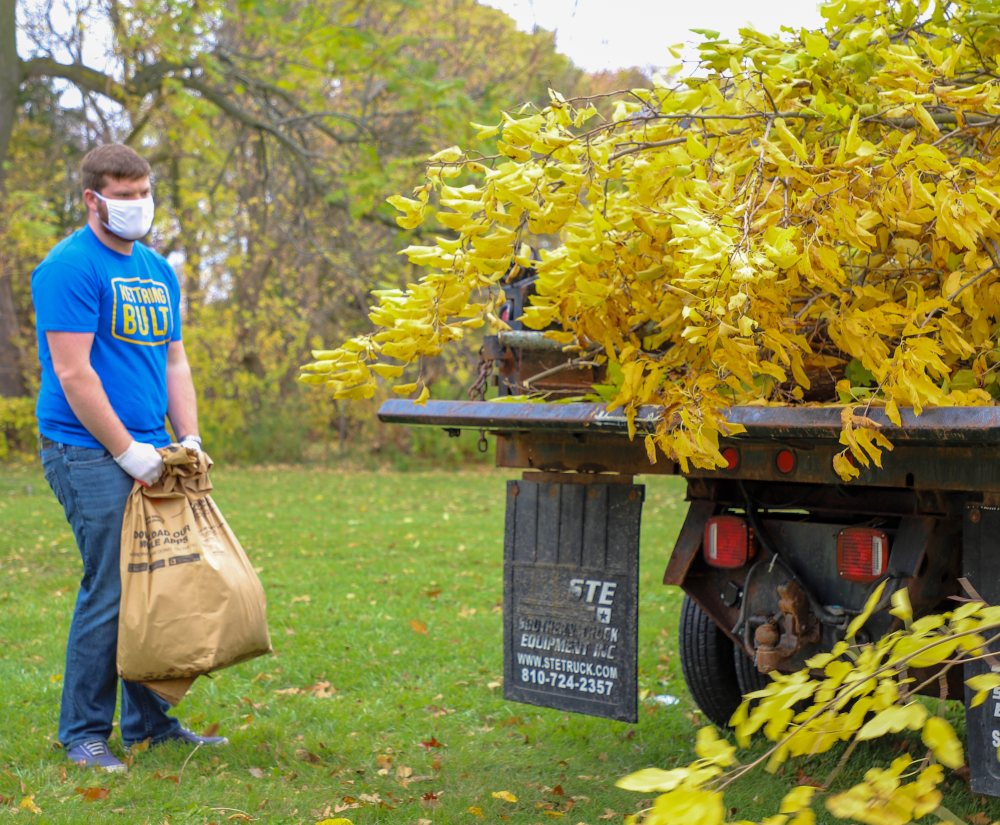