Student working to better Flint and the world through engineering, co-op with NASA 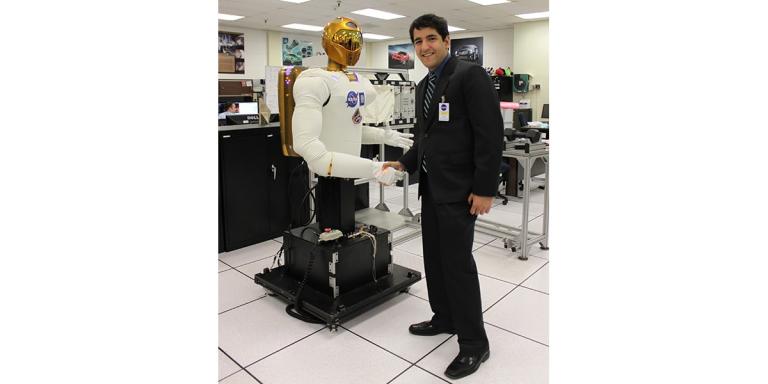 “I was able to take a lot of hands-on experience and see what engineering is really like.”

Angad Mehrotra '16 had two goals when he chose to attend Kettering University. First, he wanted to create unique opportunities for himself that would also expand the scope of Kettering’s collective co-op reach. Secondly, Mehrotra wanted to dedicate himself to using his engineering education to make Kettering and the greater Flint community a better place.

Mehrotra arrived at Kettering after having a memorable FIRST robotics career with Team 503 Frog Force in Novi, Michigan, where he competed at the Worlds competition multiple times. He began as a team engineer but progressed to advanced engineering where he also designed parts for the competitions. Both the design and engineering aspects of FIRST helped broaden his scientific and technical scopes and provided a preview of an engineering education.

“I was able to take a lot of hands-on experience and see what engineering is really like,” Mehrotra said.

Once he arrived at Kettering to study Electrical and Computer Engineering, Mehrotra immediately began working on his first goal - creating unique opportunities for himself and in turn the entire school.

When Mehrotra arrived on campus and was searching for a co-op opportunity, he reached out to three historically innovative companies - NASA, Google and Amazon. They were all interested in his expertise as a co-op student but Mehrotra chose to work for NASA Johnson’s Space Center in Houston.

“I was sold on the projects that they were working on,” Mehrotra said.

In his first term at NASA, Mehrotra was working on radiation testing for space hardware, specifically ensuring that a battery pack at the International Space Station would not fail after encountering radiation. Recently, Mehrotra has worked on modernizing NASA’s error log protocol to ensure that the most crucial messages are prioritized and flagged apart from the minor nuisances.

“A lot of the tools we use [at NASA] are getting outdated, and we are transitioning to a much more technologically advanced control center,” Mehrotra said. "I was creating new tools to assist flight controllers and in turn provide a safe environment for astronauts."

In addition to helping spur innovation in his co-op position, Mehrotra recently adopted a new challenge in response to a challenge by Magna International. Magna called for engineering students to help determine what the car of the year 2020 should be as part of the Magna Student Innovation Challenge.

Mehrotra submitted a Vine of his idea - a fully automated car that synched with an individual’s calendar so it arrived on time and knew the exact destinations on its own without further programming. The idea was innovative enough to earn Mehrotra a spot on one of two teams that were sent to the Consumer Electronics Show (CES) in Las Vegas in January 2015 to participate in the final part of the challenge.

“The first day at CES, we got a tour of Magna International and the whole show,” Mehrotra said. “We spent 12 hours walking through all the divisions to explore all the different technologies coming out now or that will hit the market in the future.”

From there, he partnered with two other undergraduate students - one from the University of Illinois and the other from Ohio State University - to develop and present their idea for the next great innovation in the automobile industry.

“All humans spend over a billion hours in traffic. That’s 1.5 billion dollars wasted on fuel while idling,” Mehrotra said. “The idea that my team created was to implement drones to make driving more convenient.”

How would it work? Each car would have its own drone that could fly up to three miles ahead of a car and wirelessly sync real-time traffic updates back to the vehicle. The drone will also have the capacity to upload and download data to and from other drones so the proposed three-mile range will be expanded like a ripple effect between machines.

“The drone will go out to scout whatever you need and it will send the information to your GPS in real-time,” Mehrotra said. “With the current technology out there, there’s no avenue for real-time updates.”

Despite the vivid imagery and innovative nature of their proposal, Mehrotra and his team finished second in the student challenge but were each offered a scholarship, internship and have a verbal full-time offer from Magna for when they graduate.

Mehrotra is currently mulling over his offer as his graduation date of December 2015 approaches. However, between now and then, he also has his sights set on his second goal for his undergraduate career.

Addressing the Second Goal in Flint and Overseas

Beyond his education, Mehrotra is committed to dedicating himself to improving Flint.

“I want to make sure Kettering and Flint are better places when I leave them,” Mehrotra said.

Mehrotra committed himself to Kettering’s Service Saturday’s program as a means to promote community organizing for the greater good in the city.

“With Angad's leadership our Service Saturdays took on an entirely new perspective,” said Jack Stock, director of external relations at Kettering. “He turned the perceptions of three different neighborhood association groups towards Kettering students on its head. We now have their confidence and cooperation, and we are all so much better as a community because of Angad's leadership.”

Mehrotra has expanded his second goal at Kettering beyond the boundaries of Flint with his involvement in Engineers Without Borders on campus. After months of organizing and planning, Mehrotra led a team of four students and two mentors to Vukuvevelle, South Africa, in January 2013. The team aimed to provide the residents of the village with a water source by implementing roof water systems.

“He oversaw the entire project. His role was a unique complicated assignment of not just thinking about solutions but coordinating with all the other agencies that have a hand in the project,” said Dr. Laura Sullivan, founder and faculty advisor for Engineers Without Borders and professor of Mechanical Engineering at Kettering. “He worked with all the stakeholders in addition to focusing just on the technical solution like other team members.”

Mehrotra is currently helping plan a follow-up trip to same village to further explore the use of water collection and mechanical filtration technologies such as bio-sand filtration. Mehrotra and his colleagues at Engineers Without Borders are in the process of fundraising for the trip that is tentatively scheduled for July 2015.

“It was absolutely eye opening to see the world beyond our borders,” Mehrotra said. “We wake up every day and wash our hands and brush our teeth. That’s something that’s not even considered in other countries. This is a means of helping out those that are not as a privileged.”

For Mehrotra, utilizing his engineering talents to assist others both locally and internationally is more than an obligation - it’s a moral imperative.

“I know Kettering is a phenomenal University. It has so much potential and I’ve seen it grow in the last four years. It feels like a moral obligation to help out,” Mehrotra said. “This is my home. It’s my job to help out and do the best that I can.”