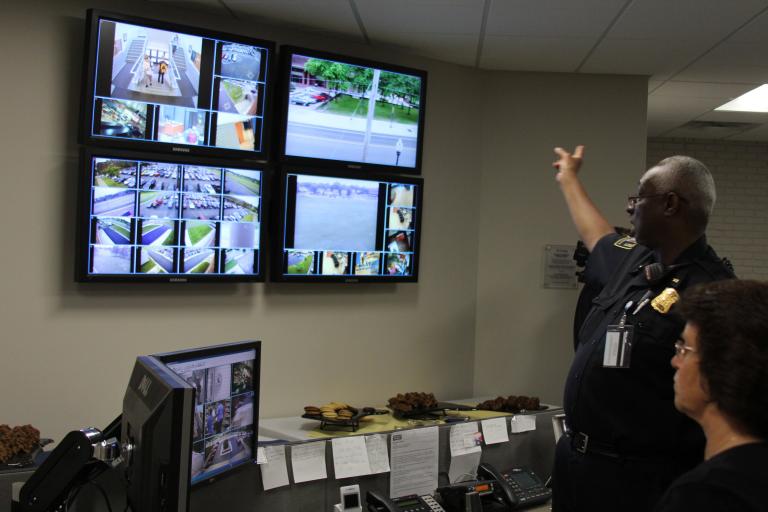 “A team of facility security professionals from Lear Corporation helped us to evaluate our needs and then to design and install one of the most sophisticated campus monitoring systems at any university in the United States,”

The system, which makes Kettering's campus among the most secure in the country, was funded by a donation from the Lear Corporation. The donation supports a $330,000 campus initiative, supported by the Charles Stewart Mott Foundation, which includes renovation of the Campus Safety service center, increased security enforcement and utilization of the Crime Prevention through Environmental Design (CPTED) model of security. Lear's security team also provided expertise and served as consultants on the project.

"A team of facility security professionals from Lear Corporation helped us to evaluate our needs and then to design and install one of the most sophisticated campus monitoring systems at any university in the United States," said Kettering University president Robert K. McMahan. "I am grateful to Lear for making this day possible.  In particular, I want to thank Ray Scott, executive vice president & president of seating operations for Lear, who is also a member of the Kettering University board of trustees. When Ray learned of the significant investment by the C.S. Mott Foundation in the University and the work that it was supporting to expand our campus security infrastructure, he wanted to help. He and his team provided critical assistance to us in determining the right approach and the ideal solution for our needs. Lear's financial investment in Kettering made it possible for us to implement the perfect system now, without compromise."

The upgraded technology in the security center allows students to feel secure at all times on campus. The new system includes 90 cameras – impressive coverage for a campus the size of Kettering’s.

"The technology here is innovative which is huge for students like us," said John Oliver, Kettering University Student Government A-Section President. "The increased visibility for campus safety officers makes us feel safe so that we can focus our concerns on our work both inside and outside the classroom."

Supporting the security center upgrades at Kettering and in the surrounding area also fulfills the C.S. Mott Foundation’s mission to strengthen Flint as a whole.

"Strengthening and transforming communities in the Flint area is part of the heart of C.S. Mott Foundation's mission," said Jennifer Liversedge, assistant to the President and program officer for the C.S. Mott Foundation. "We are pleased to see how Kettering University has taken a leadership role in the Flint community. Between the police service station across the street and the service center here, we're really seeing the great strides being made to promote safety and security in the community."

The surveillance system provides full coverage of the Kettering University campus with high definition cameras and software that leverages high-definition stream management (HDSM) technology. Images are displayed on a video wall, showing all activity on campus and ensuring the safety of the campus and surrounding areas. The new system augments the University’s existing analog camera system with a large number of high-definition, panoramic cameras that will together provide total visibility and coverage of the campus as well as parts of the surrounding community. The cameras are programmed to record and archive any motion in their field of view.

"The city of Flint and the surrounding areas are also important attributes of the Kettering experience," McMahan said. "It's a passion of ours and one of our four strategic pillars that we engage actively in creating a safe and sustainable area within our city and that we contribute actively to the renewal of our city and region by fueling innovation and entrepreneurship in our graduates and by collaborating with our educational partners across the region. Our new campus safety service center embodies the True Kettering philosophy perfectly. It's about leadership and service and innovation and collaboration with our educational partners."

Flint Mayor Dayne Walling stressed the importance of continued partnerships between the city and its institutions, with this project as the latest example.

"This is one more example -- with the partnerships and collaboration -- of Kettering’s investment in our community and Kettering’s students," Walling said. "I'm constantly amazed by the growth of the University and the impact that Kettering is having on our community. I think you see it as you drive around, the positive changes that are taking place."