“The work being done at Kettering University will further solidify Michigan’s status as the auto capital of the world in this new age of mobility, and I am committed to supporting this work at the federal level.”

“Michigan is home to the automakers, suppliers and research institutions that will make our state the leader in the next generation of technology-driven cars, and I am proud that Kettering University and the Vehicle City will be part of that effort,” said Senator Peters, a member of the Senate Commerce, Science, and Transportation Committee. “The work being done at Kettering University will further solidify Michigan’s status as the auto capital of the world in this new age of mobility, and I am committed to supporting this work at the federal level.”

“Kettering University and its alumni have historically played a leading role in the development of the modern American automotive industry, and the university is building on that legacy by playing a critical role in the development of connected and autonomous vehicle technologies,” said Dr. Robert K. McMahan, President, Kettering University. “Our research and development on autonomous cars will also attract economic investment and opportunity in Flint. We thank Senator Peters for his efforts on the federal level to ensure Michigan is a leader in the next frontier of automotive development.” 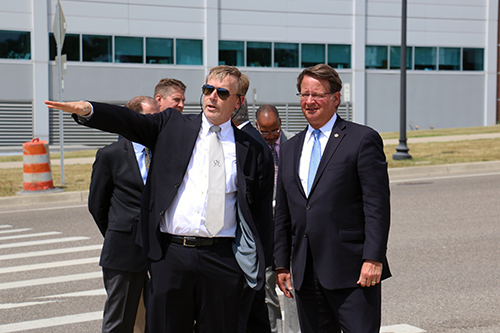 Last year, Kettering University received $2 million from the General Motors Foundation to construct Kettering University’s GM Mobility Research Center, which will be home to an outdoor lab space and proving ground which will be used to enhance research and development of autonomous vehicles, vehicle safety standards, hybrid and electric vehicle technologies and many other uses.  Construction on the site began earlier this year. Additionally, Kettering University has received significant support from the National Science Foundation’s Major Research Instrumentation (NSF-MRI) program, which has allowed Kettering to become one of the only college campuses in the country with its own 4G LTE wireless systems. This boosts speed of data transfers and expands research and collaboration opportunities. Kettering has received six NSF-MRI grants since 2012, more than any university in Michigan over that time period.

Kettering University’s Crash Safety Center, established in 2006, allows for research, testing and data collection on adult and pediatric vehicle occupants in frontal, side, rear and rollover crashes.  Recent work in the facility has included development of a new side-impact test procedure for infant seats for the National Highway Traffic Safety Administration (NHTSA).

As a member of the Senate Commerce Committee and Co-Chair of the Smart Transportation Caucus, Peters has made the development of and investment in advanced vehicle technologies a top priority. Last year, Peters authored a provision signed into law by the President to allow states to invest in vehicle-to-infrastructure technology. Earlier this year, the Senate passed Senator Peters’ Vehicle Innovation Act to spur investments in clean vehicle technologies and support American advanced manufacturing.