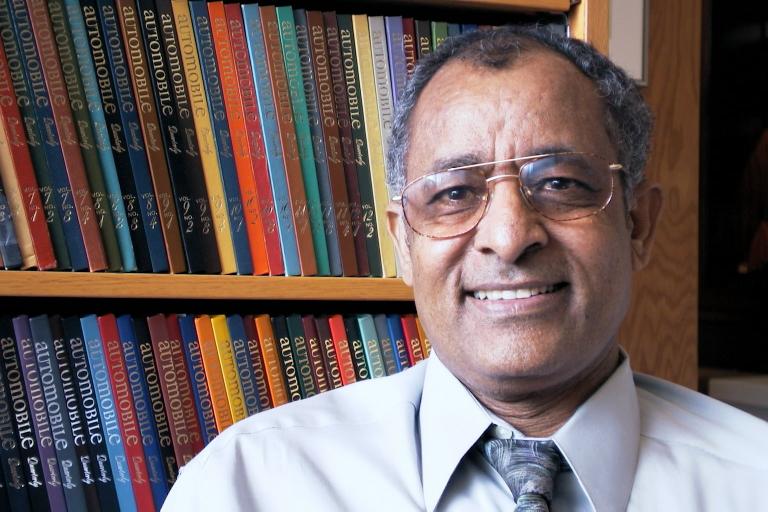 A trip to the dumpster turned into the first step in developing a state of the art electronic controls laboratory at Kettering University. A celebration to open the new lab - the Rockwell Automation Control Systems Design Laboratory -- is set for Tuesday, Oct. 22, at 2 p.m. in the Academic Building.

While on a cooperative work assignment at General Motors Powertrain Group back in 1993-95, Dr. Petros Gheresus saw an educational value in relays being discarded by General Motors. GM was replacing relay logic based controls into computerized ladder logic programming in its manufacturing operations. The assignment was at Buick City in Flint and was funded by the Sloan Foundation.

Gheresus, professor and director of the Industrial Engineering at Kettering, got permission to salvage the equipment. He brought it to Kettering and started a laboratory where students can get hands-on experience and learn the basics of control systems -- the hardware that industrial facilities use to guide machines such as material handling, welding robots, automated guided vehicles, automated storage and retrieval systems, paint booths and more.

With the help of Roger Hergenreder, a GM electrician he met during his co-op work assignment, Gheresus constructed models relay-based controls systems from the salvaged parts. "Roger and I originally went dumpster diving to build circuits so I could learn hands-on how to build them and then teach my students," said Gheresus.

While Hergenreder was teaching Gheresus how to wire sensors and build control panels, it became apparent that Gheresus could return the favor by teaching Hergenreder Visual Basic Programming and PC based ladder logic program that was used to control the manufacturing and assembly operations at the plant. "As part of my co-op assignment, Roger and I developed a training program for all of the electricians on how to use DOS, write, debug, download ladder logic programs into a PLC (Programmable Logic Controller), and run the programs," he said.

"We took a control panel, loaded it with various input and output devices and connected it to a PLC. I knew enough to be dangerous in terms of programming and he knew how to build the circuitry and wire it, so I taught him a little about this, and he taught me a little about that, and we got together and wrote a training manual," Gheresus said.

"We trained 72 electricians on all three shifts. The electricians liked it because now they could do their de-bugging from the computer and not have to physically inspect all of the devices and try to figure out what's going on.

"From that," Gheresus continued, "ensued the idea that we needed to have computerized systems like this for Kettering University students. Steve Bardocz, one of my former students, worked for McNaughton McKay Electric Company in Ann Arbor," he said. "He assigned a Kettering co-op student, Jason Plasencia, to help me develop and design the exact hardware and software components required to build control workstations to be used by Kettering University students."

The seven workstations are valued at $300,000. McNaughton McKay convinced SuperiorControls to build the first workstation at no cost, Gheresus said. Total cost to equip the lab and renovate space on campus was about $380,000.

Each workstation is equipped with the following hardware and software:

The hardware and software is widely used by many industries such as GM, UPS, Ford and others.

"Before you build a manufacturing facility you can actually simulate the processes, visualize the flow and show how things are assembled," said Gheresus. "It enables engineers to change some elements to project values, collect data and interpret the results before the entire system is built giving one an idea how the system will work. Once the system is built, the control system is used to collect data that is then converted into information and disseminated."

For example, Gheresus noted, the control system can page a maintenance person in the event of an emergency. "The maintenance person can diagnose and correct the problem remotely. The potential application for such a system is limitless."

This laboratory provides students real world, hands-on experience, he said. Students learn rudimentary Visual Basic Programming, wire relay logic circuits to solve various problems, write, debug, download ladder logic programs to address real applications. The course was originally developed for Industrial and Manufacturing Engineering students, but it has attracted students from other disciplines because they decided that it was important to know for their work site, he added.

The original dumpster finds are still in use too. The circuit boards first built by Gheresus and Hergenreder are how all students start their hands-on controls experience. A solid foundation for the next step - state of the art computerized controls.