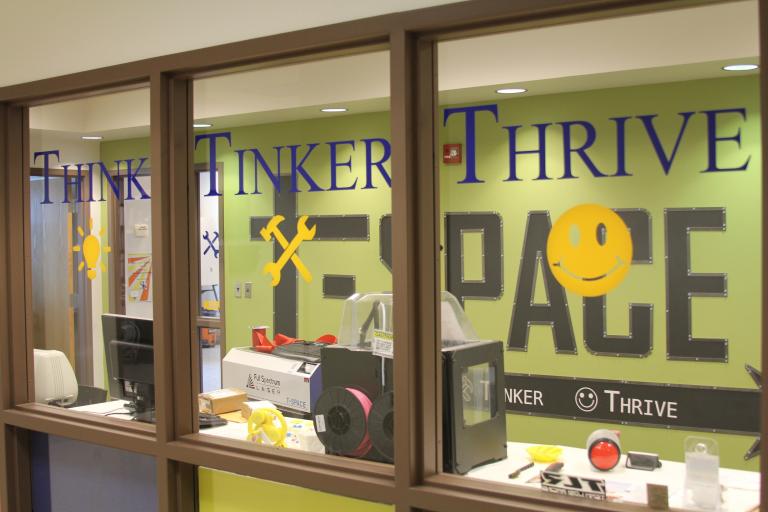 Alex Barath ‘13 has a wish for each and every Kettering University student and organization – he wants them all to have proper access to materials, tools and resources to not only complete their class projects, but to express themselves creatively via science and engineering.

Thus, with the guidance of Dr. Massoud Tavakoli, professor of Mechanical Engineering and director of the University's Innovation to Entrepreneurship Across the University (i2e-AU) initiative, they started building on President Robert K. McMahan’s vision for collaborative spaces on campus with a student-driven re-construction project on the second floor of the C.S. Mott Building to create a space where students can “think, tinker, and thrive” with their personal and school projects and hobbies. The space is affectionately nicknamed the “T-Space.”

“I compiled research on what other spaces have done then started making decisions on what to do based on the room we had,” Barath said. “We’re primarily modeled after the Stanford [University] d.school and the Google Garage. The Google Garage, that’s where they do groundbreaking things like Google Glass and driverless cars.”

The Kettering T-Space as it’s referred to in the prototype phase is constantly evolving its mission and offerings. It currently provides students access to 3D printing, laser cutting, soldering and other utilities to work on small electric and mechanical prototypes.

Barath graduated from Kettering in December 2013 with degrees in Electrical and Mechanical Engineering and now works full-time for General Motors in Milford, Michigan. However, in his spare time, he still manages the progress and use of the space and hopes to see it grow in each passing section.

The Short- and Long-Term Future of T-Space

The T-Space is constantly evolving but will begin as a place for light prototyping with access to whiteboards, moveable furniture, music creation, communication devices and a green room for animation and multimedia production. In the near future, the space will contain servers that will provide students with access to software that may not otherwise be common on campus. The tools currently provided are plentiful for computer scientists and mechanical and electrical engineers to experiment.

“The end is not to encourage our students to create businesses. That they can do on their own later in life,” Tavakoli said. “The underlying motivation for all of this is to get our students to adopt a mindset that might be alien or uncomfortable to engineering and science students. That mindset is the innovation and entrepreneurial mindset. “

Barath further breaks down the vision for the T-Space into short- and long-term goals. In the short-term, he wants students and clubs/organizations to use the space for their class and extra-curricular projects. Long-term, he would like to see the space evolve into a full-fledged Makerspace with student access expanding to heavy machinery and the other labs on campus.

“We really want people to talk - to start the discussion about how we can use this,” Barath said. “In the future, I really want us to open up all the labs and tools of the University to students.”

The ultimate goal of the space is to have 24-hour access to all students who wish to explore and experiment on personal and professional projects.

“First thing is the space of course,” said Hunter Casbeer, president of the Kettering Entrepreneur Society. “We didn’t have a space before. Then another thing is collaboration with other students. We can make the space but how are we going to get the students to come to the space? That’s what we’re working on right now. We want to make it open, make it a community space, you don’t have to be associated with any major or club to use it.”

The space also complements the  Innovation to Entrepreneurship (i2e) course of study created by Tavakoli. The course of study equips Kettering students with a problem-solving and entrepreneurial mindset that allows them to build on their technical and engineering skills.

“The hypothesis of the entire i2e movement on this campus is to get all our students to realize that what they are gaining here in their highly practical education is badly under-utilized if they only use it to get a job,” Tavakoli said. “There’s a much higher purpose for what they are getting here and that’s to improve the world and gain their own fulfillment in the process. We think the missing element is the mindset. If you had that innovation to entrepreneurial mindset and let them practice it here then that seed is going to grow into a tree someday.”

Kettering students now have the necessary T-Space to begin transforming their mindsets to “think, tinker, and thrive.”