NASCAR executive got ‘head-start’ on his career at Kettering 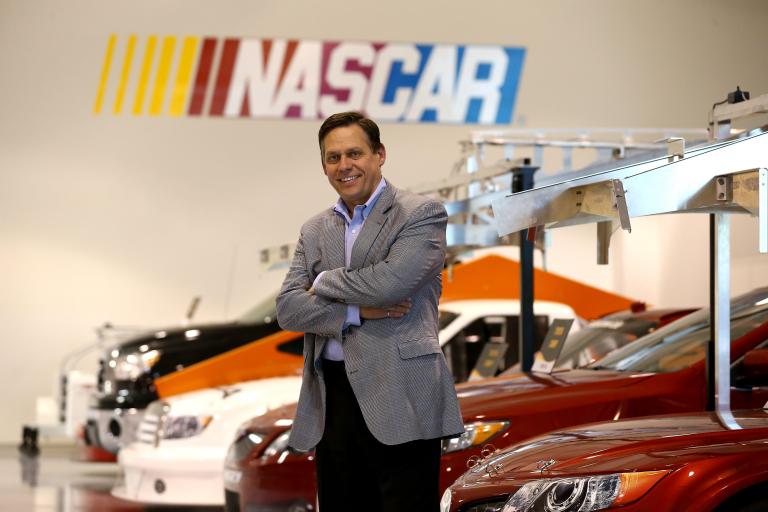 “I lived in five countries. I&#039;ve moved seven times. I worked in manufacturing, plant engineering, finance, planning, program management and quality. I&#039;ve had the opportunity to live in and experience five cultures and work in eight functions.”

From Kettering University to around the globe, work has taken Eugene (Gene) Stefanyshyn ‘81 across the world and provided him with quite the international family. Stefanyshyn proudly claims the international flavor of his family as his daughter was born in Sweden, son in Germany, his dog is from Australia and cat is from Detroit.

"I have been very fortunate and very lucky. I got to see the world,” Stefanyshyn said. "I lived in five countries. I've moved seven times. I worked in manufacturing, plant engineering, finance, planning, program management and quality. I've had the opportunity to live in and experience five cultures and work in eight functions.”

After 30 years of traveling the globe with General Motors, Stefanyshyn now calls North Carolina home after being named the Vice President of Innovation and Racing Development for NASCAR, a newly created position for a sport rapidly developing new technology that will improve both the racing product and the fan experience.

In his new role, Stefanyshyn will lead and shape NASCAR’s future approach to competition by utilizing and developing innovations that advance the overall product. Additionally, he will work in close collaboration with other NASCAR departments and industry stakeholders to develop a leading edge culture for NASCAR surrounding engineering and technology.

How vital is this role to NASCAR’s future? The sanctioning body chose Stefanyshyn after an exhaustive four-month search.

NASCAR has seen explosive growth in innovation over the last few years, highlighted by the new Gen-6 race car that is used at the sport’s top level, the NASCAR Sprint Cup Series. Already, Stefanyshyn, along with the rest of NASCAR’s competition department, is developing the seventh generation race car. Like the premise of the sport itself, things rarely slow down in NASCAR. And Stefanyshyn is the newest in a long line of engineers that will keep NASCAR on the cutting edge of technology and innovation.

Stefanyshyn graduated with a mechanical engineering degree from Kettering University (then known as General Motors Institute) in 1981 before returning to work for General Motors in Oshawa, Ontario, Canada, also the site of his co-op placement.

After working on engine collaboration as a powertrain engineer in Oshawa, Stefanyshyn pursued his Masters of Business Administration (MBA) from the Richard Ivey School of Business at the University of Western Ontario.

“When I pursued my MBA, I focused on finance,” Stefanyshyn said. “It became clear to me that the perfect combination would be a technical person who understood cars with an understanding of business and how businesses run.”

Upon graduating with his MBA in 1985, Stefanyshyn returned to GM in Canada before beginning a decade long journey overseas in Sweden, Germany and China. He landed in Detroit in 1996 where he eventually received his dream assignment which would require one more international journey – the Camaro.

From 1996 to 2009, Stefanyshyn worked as a vehicle line executive overseeing mid-size and compact cars. In 2006 he was asked to explore the possibility of a new Camaro for which he had to travel to Australia to gain their expertise on rear-wheel drive vehicles.

"Wow, that's a beautiful car, I love that car. Fast forward 20 years later and someone asks you to do that one and put it in your hometown plant in Oshawa. To me that was a dream come true,” Stefanyshyn said. “I get to do a Camaro and I get to do it in Oshawa where I grew up and still have a family.”

Stefanyshyn was positioned in Australia for four years and the Camaro was released in 2010. Stefanyshyn was named the executive director of global program management in 2010 and then global product development quality in 2011 before joining NASCAR this past spring.

Stefanyshyn was originally planning on becoming a tool and dye maker in high school before teachers encouraged him to look at engineering schools. A recommendation from a sister’s friend and a chance meeting at the airport (where Stefanyshyn worked) with a Kettering employee ultimately led him to Flint, Mich., for his undergraduate education.

“I got to work and basically fund my education,” Stefanyshyn said. “For me, someone with a blue collar background, I didn't come from an affluent background, this was an excellent opportunity."

The small class sizes, the one-on-ones, and the personal education at the school combined with co-op provides a “very powerful” education according to Stefanyshyn.

“The ability to learn and get prepared for the real world is so overpowering,” Stefanyshyn said. “If you have a longer view on it, it's such an advantage. I even talk to people who hire engineers and they say they take Kettering graduates because when they come out, they have a three-year head start on other individuals."