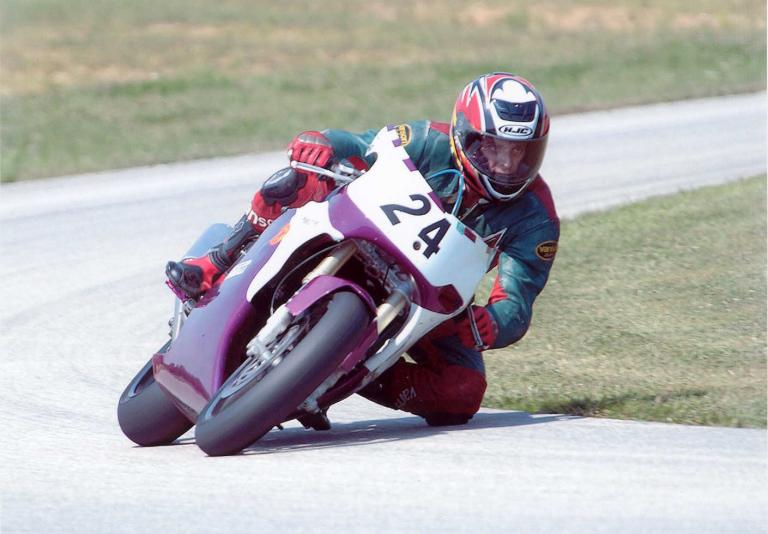 Kettering Mechanical Engineering student Andy Weiss had no idea his co-op experience at Delphi Corporation would eventually lead to a national motorcycle championship this past October. But it did.

"Tim Barker, who works as a pipe fitter at the Delphi Flint East Operations facility, introduced me to racing when I worked at the facility for a term," explained the 22-year-old Weiss. "I've always liked motorcycles and when I found out he raced and worked on bikes, I asked if I could help out. A year later, after working with him throughout that time, I show up to help one day and Tim said, "Well, I found a bike for you to race next summer."

The excitement and success Weiss now enjoys with the sport makes him want to further his racing career.

He began racing as a novice in the Western Eastern Road Race Association (WERA), which sponsors races in Michigan, Ohio and Indiana. His first national victory came in late October at the WERA Grand National Finals (GNF) on Road Atlanta in Braselton, Georgia. Weiss won the Clubman class riding a Yamaha SZR 660 cc, which can generate speeds in excess of 135 mph. Barker, who injured his back in a previous race and asked Weiss to ride the Yamaha at the GNF, owns the bike.

Last year, as a novice, Weiss also won the regional championship for the Clubman class on a similar motorcycle and all Clubman races he entered, which qualified him to compete in the Grand National finals in 2001. However, he was unable to race because he was overseas participating in a study abroad term. This year Weiss won enough points in his region to qualify him for the GNF in Atlanta.

Since the bike he rode uses several prototype hardware components that Barker and Weiss incorporated into the bike, both were curious to see how it might perform in race conditions.

"Thom Godward, who is a senior Mechanical Engineering student at Kettering and a close friend, is the chief mechanic for the bike, so I had a ton of support in achieving my first national championship," Weiss said. "Together, we were able to get the bike ready and it really performed well."

Kettering's academic program also played a role in Weiss' recent success on the track. He said that classes dealing with metals and the mechanics of materials aided him and his crew in determining what type and series of aluminum to use for such items as foot pegs. In addition, knowing the correct viscosity of fluids also helped, especially in motor oil and front fork oil. "In racing, everyone is looking for that extra half horsepower or extra half second of lap time," Weiss said. "Knowing something about metals and oils, which I learned at Kettering, can give teams an edge."

When he's not racing or in class, Weiss works at the Delphi Corporation Technical facility in Brighton, Mich. Although he receives tremendous support for his racing from friends and family, he is cautious when discussing a possible career as a professional driver.

"Motorcycle racing is more unpredictable than the auto industry," he said. "I would like to find a good ride on a great road racing team, but first I want to get a good job, work for a growing company and save money before I consider committing to racing full-time. Next year, I would like to find a decent sponsor who can help with the cost of parts and travel, and go for another national championship."

And as far as this recent race went, Weiss was surprised to learn that another Kettering graduate finished behind him in the same racing class. Jon Jarvais '00 of Otisville, Mich., placed second.

"The last lap Jon and I traded places for the lead three times," Weiss said. "He has a lot of knowledge on building a fast bike, which was visible on the track that day."