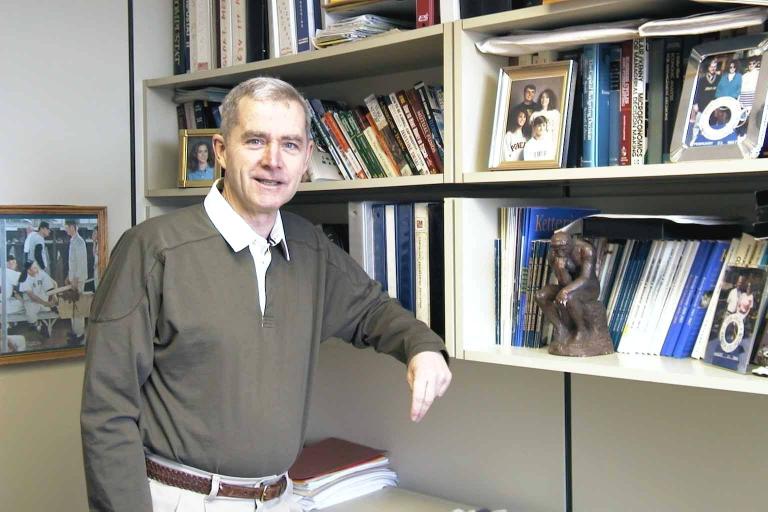 Neil McCarthy is a professor who truly cares that his students learn and use the concepts he offers in class. For him, the true measure of career success is measured by the accomplishments and experience his students have while attending Kettering and succeeding at their co-op jobs.

After all, this is a man who has gone through the Kettering/GMI program and knows first-hand what makes the education at this institution different from other schools. His affiliation with University began in 1960 as a student from Rochester, N.Y., sponsored by the Delco Appliance Division of General Motors. Following his undergraduate degree in Mechanical Engineering, he earned an MBA from the University of Miami in 1967, a master's of science degree in Management in 1971 and Ph.D. of Managerial Economics in 1977 from Rensselaer Polytechnic University. Along the way, he carved out a niche as an academic devoted to teaching, a professor who pushed students to learn concepts until they were as easy to recall as the name of their favorite sibling.

In 1973 while pursuing his Ph.D., he returned to his alma mater to teach scores of young people who would eventually come to lead a number of diverse industries and companies. Years later, in 1995, Neil McCarthy worked with Kettering administrators to initiate a program in which the University sends students to partner colleges in European nations to spend a term studying abroad, thus giving them exposure to a global perspective regarding business and industry.

The first European college to engage in this effort was Reutlingen University in Reutlingen, Germany, an institution that welcomed students majoring in Electrical Engineering (EE) from Kettering. Eventually, McCarthy said professors Mo Torfeh and Mark Thompson of the Electrical and Computer Engineering Dept. got involved in the exchange program, and now it is one of the largest of Kettering's overseas educational opportunities currently available.

Today, McCarthy is still actively involved by assisting in the development of new academic exchange opportunities in consultation with all of Kettering's European partner schools. As a result, Reutlingen University awarded the school's coveted Medal of Honor to McCarthy for his dedication and commitment in the exchange program between the two schools. Typically, Reutlingen University awards the Medal of Honor to people from Germany who commit themselves to the school. But at a meeting of the Reutlingen University's senate Dec. 13, 2002, administrators and faculty agreed that this year's award should go to McCarthy as a way of showing appreciation for his commitment in making sure the exchange between the two institutions is one of the best available. He will travel with his family in July, 2003, to Germany for the awards ceremony.

Yet McCarthy is a little shy when it comes to recognition for good work. For anyone who knows him, he is a humble man who is somewhat uncomfortable winning awards. Instead, he prefers to talk of a program's impact on students and institutions, and of the university executives who find such programs to be of invaluable worth. He cites Kettering President James John as one strong supporter of the Kettering International Studies program, whose goal is to see 50 percent of all undergraduate students experience the program as part of their education here at the University.

The number of students participating in the program is growing, McCarthy noted. "In 2003, we will send 25 students majoring in Management overseas to Reutlingen for a term, and 20 Industrial Engineering students as well," he said. He also explained that the program continues to grow in size and dimension. Kettering students who travel overseas for a term receive instruction in English and all classes fit with the Kettering academic schedule. Students who come from European partner schools through the exchange program participate tuition-free, which McCarthy said is Kettering's "return to our European partner schools."

McCarthy was caught completely by surprise when the award letter arrived. But when asked how he felt upon learning of this honor, he chose to describe how students view the program and the impact it has once they return home and back at Kettering.

"When they come back, they behave differently," he explained. "They have a better understanding of the culture after living in another country. "They've seen the world' and come across as more confident in doing things they never thought they could do. I've never had a student come back and say it wasn't worthwhile."

For Dr. Mo Torfeh, there is little doubt why the program has achieved the success it has in recent years. A number of Kettering executives, administrators and faculty have played critical roles in shaping the program, but Torfeh believes McCarthy's role is one of the most important. "Because of Neil's work and that of others at this school," he said, "the relationship between Reutlingen and other European partner schools has become very strong. He worked with faculty and administrators at partner institutions to make sure course offerings were appropriate for each student's degree program."