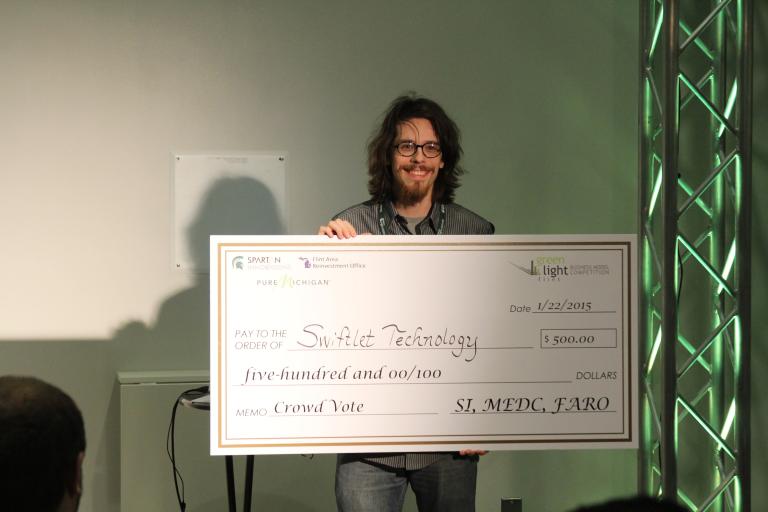 “This is a triple bottom line business, meaning we do more than just consider profits, we also consider people.”

Three startups with Kettering University ties - Swiftlet Technology, Greencharge and GroceryPal - were among nine finalists in the Greenlight Flint Business Model Competition on January 22 at the Flint Farmers Market. Dan Kurin ’11, founder of Swiftlet Technology, took home a cash reward for $500 for the Crowd Vote Prize.

“This is a triple bottom line business, meaning we do more than just consider profits, we also consider people,” said Kurin, during his four-minute presentation to the audience and judges.

Kurin compared his business application to “Thing” from the Addams Family – a technology that will automate house appliances and operations so they work at maximum efficiency and minimize costs. Kurin’s project is unique in that it will be open source and allow for multiple hardware interfaces to collaborate together.

“I see this business as not only going statewide but nationwide,” said Connolly, during his presentation. “This has the potential to revolutionize the auto industry. Let’s change it for the better and let’s start right here, in Flint, Michigan, in Vehicle City.”

John Casci ’14 and Mary Murphy ’14 presented their idea for an Uber-style grocery delivery app in Flint called GroceryPal. The concept: the app is used by either a shopper or a customer. The customer solicits the information that they need from the grocery store, their budget and preferred shopping destination and the order is taken by a local shopper who will deliver the groceries to the customer’s door.

“Our solution is to connect with each other in the community through our app,” Murphy said.

The benefit of GroceryPal is its low overheads as the business is essentially an app that connects individuals on a peer-to-peer social network. Casci and Murphy hope that their concept is not only a matter of convenience for those with means but also an application to assist those lacking the transportation options and resources to obtain groceries outside of their immediate vicinity. They believe that the app can expand to serve many different needs regardless of socioeconomic status and ability.

“It’s an easy upscale from an app,” Murphy said.

Despite not taking home the grand prize, all three companies are planning on continuing pursuing and developing their ideas as they seek seed funding from other competitions and resources.