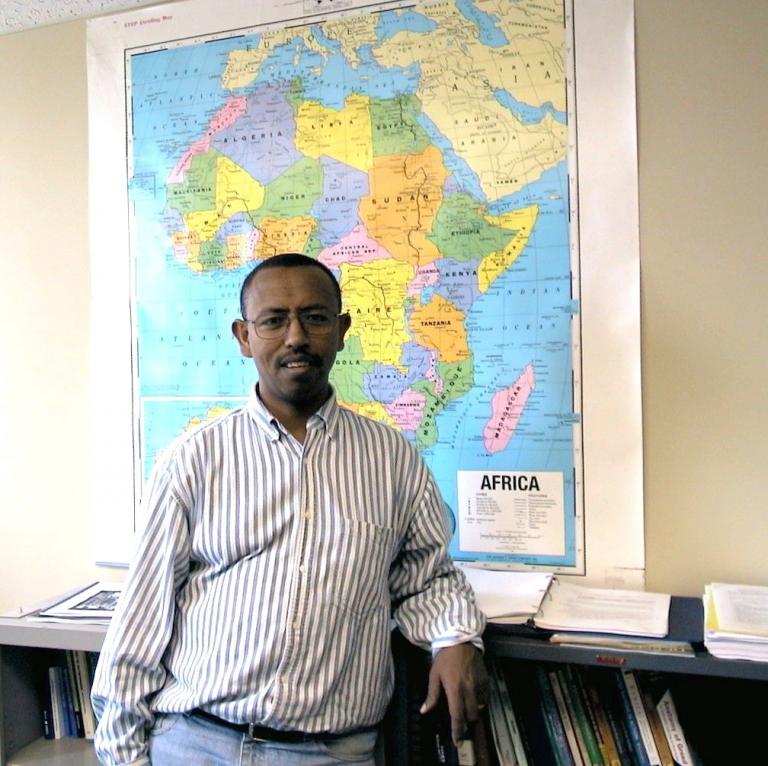 The letter was somewhat intimidating, with its raised seal of the United States State Department in the top right corner and its description of expectations the country holds for all Fulbright Scholars clearly defined in objective, concise prose. Dated April 9, 2003, Ezekiel Gebissa, assistant professor of Social Science at Kettering, acknowledged that the prestige of winning a Fulbright Scholar Grant didn't hit home until the notification letter arrived in his mailbox.

"I knew the Fulbright program was a good opportunity to teach and conduct research at a university in Ethiopia," he explained, "but I did not realize how prestigious it is to win such an award until it became news at Kettering."

For Gebissa, his recent selection as a Fulbright Scholar represents a period of intense study, research and scholarly productivity since earning his Ph.D. from Michigan State University in 1997. Over the past year, he was fortunate to see his first book, "Leaf of Allah: Khat & Agricultural Transformation in Harerge, Eastern Ethiopia, 1875-1991," accepted for publication by James Currey and Ohio University Press. Coming out this fall, the study deals with the history of the production, distribution, and consumption of a quasilegal psychoactive shrub called khat in the Horn of Africa.

Gebissa is also the current president of the Oromo Studies Association (OSA), a scholarly, multidisciplinary, nonprofit organization established by Oromo and expatriate scholars to promote studies on the Oromo people in Africa. The Oromo are the third largest national group in Africa and constitute nearly half the population in Ethiopia. In August, he will help coordinate the annual OSA conference in Toronto, an event co-sponsored by Kettering, Michigan State University and the University of Toronto. Based on these recent achievements, it's clear that he is a researcher and academic whose future holds even greater promise.

The Fulbright grant is an accomplishment that he views with astonishment and appreciation. For the last 50 years, the Fulbright Scholar Grant program has been an important U.S. government initiative to increase mutual understanding between the American and those of other countries. Developing international understanding requires commitments on the part of Fulbright grantees to establish open communications and long-term cooperative relationships to build on the experience following the conclusion of the grant.

Gebissa will begin his Fulbright year of research and teaching at his alma mater, Addis Ababa University, in September of this year. The university, founded by Canadian Jesuit teachers in 1946, is the largest university in the country and provides instruction in English. Gebissa will teach undergraduate and graduate students, and conduct research for his second book tentatively titled, "Cash is better than Food: The Evolution of Specialized Agriculture in Ethiopia, 1900-1991." This new book covers the same period as the first, Gebissa explained. "Thematically, it is a sequel and deals with the impact of the commoditized cash crop on the age-old annual cereal complex that has characterized Ethiopian agriculture for centuries," he said. His newest study will focus on areas where khat has become the preferred, high-income generating cash crop and looks into larger processes of change that have engendered comparable transformations in various parts of Ethiopia.

Gebissa also feels his second book may appeal to a wider audience for three reasons. First, it examines the treatment of the economic history of Khat, a "drug" considered illicit in several areas of the world. Thus, the theme may indeed take the study beyond the usual African studies area into a "comparative domain," he said. In his view, the work could be read as an economic history by readers interested in the political economy of psychoactive agricultural products in Latin America or Southeast Asia.Second, as an economic history of Ethiopia, it may fill a niche in African national historiography. Finally, the book contributes empirically to an ongoing debate regarding the behavior of agricultural smallholders in developing economies, and establishes broader links between the Horn of Africa and the Arabian Peninsula in a way few other studies have done.

Other duties he expects to engage in during his stay at Addis will include service as thesis adviser for students working on their senior thesis project. He will also look into establishing communication between Kettering University and the exchange program at Addis as a means of creating additional exchange opportunities for students from both institutions.

Karen Wilkinson, interim chair of Kettering's Liberal Studies Dept., was pleased to hear of Gebissa's Fulbright award and believes this kind of honor further highlights the national and international contributions of Liberal Studies faculty in their areas of research. "It is a high honor to receive a Fulbright Scholar Award," Wilkinson said. "The faculty members of the Department of Liberal Studies are very pleased that Dr. Gebissa has been so honored. It recognizes him as a scholar but it also calls attention to the fact that our department values excellence in research as well as in teaching."

And one of the most important benefits for this recent award is the opportunity for Gebissa to show his students at Kettering how important it is to develop a global view toward the world. "The United States is not the world," he said. "Students here should take all opportunities to meet and learn from people who live throughout the world. If anything, I hope to convey to them how important it is to expand their horizons and look beyond the U.S."

Gebissa will not be alone in his year of Fulbright work. His wife Meseret, who works as a nurse practitioner in East Lansing, and his three children, will accompany him to Ethiopia. "My family is very excited about our stay," Gebissa said. "We're all looking forward to the year ahead."