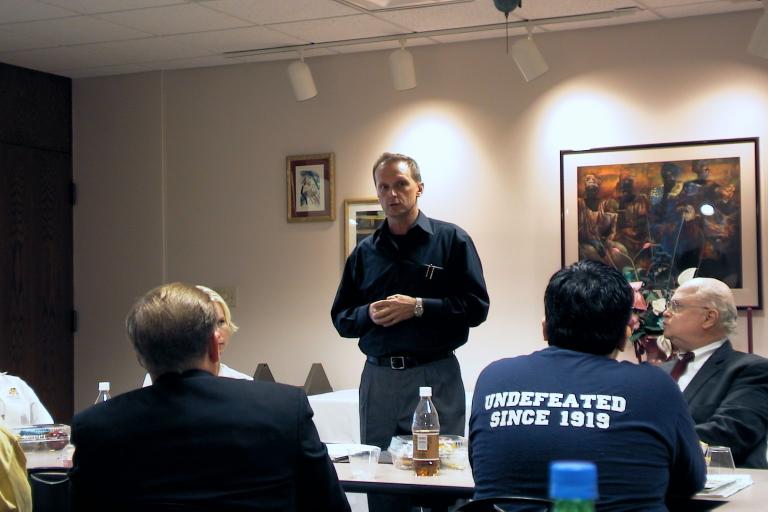 Tom Smith '77 recently came back to Kettering to talk with members of the Student Alumni Council (SAC) about his education as a student at General Motors Institute, and about his distinguished career with some of the nation's leading companies and organizations.

Reg Bell, professor of Chemistry, invited Smith to give a luncheon presentation, which was held in the Women's Resource Center Sept. 16. More than 25 students attended the luncheon to hear Smith's humorous anecdotes about his days as a student on campus and about his career with Lowe's Companies, one of the premier home improvement organizations in the United States.

During his career, Smith served as assistant to the chairman at Lowe's Companies and is recognized as the primary author for Lowe's 2000, the document utilized by the company in determining the organization's successful growth and expansion strategy over the last 15 years.

He began his career as a co-op student with the Cadillac Motor Division of General Motors Corp. in 1972 and served with the company until 1979, when he moved to Lowe's. He was also a principal consultant for Pricewaterhouse Coopers in Columbus, Ohio, where he led the strategy and marketing development team for the creation of a business plan that successfully raised $250 million to launch an e-market for the consumer packaged goods industry.

As he spoke to students, Smith noted that students should do the best job possible in every field and position they work. "You never know when all those things that you have done in your career will come back and support your current endeavors," he said. "Your thesis, for example, is a tangible product you can take with you to companies to show specifically what you can do."