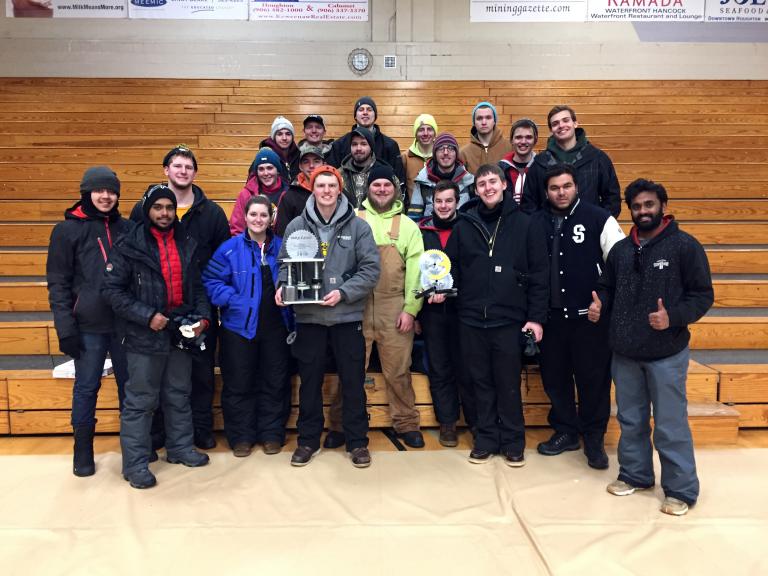 The Kettering University SAE Baja Team was thankful for its preparation in snow and ice this year as the extra practice helped them secure a third place finish at the Michigan Tech Winter Baja Competition.

The competition was in February at Michigan Technological University in Houghton, Michigan. The usual run-down dirt track turned to ice and snow as a storm came in on competition day, but the team was prepared and had a lot more fun with it, said Eric Stuckey ‘18, Baja Team Leader. 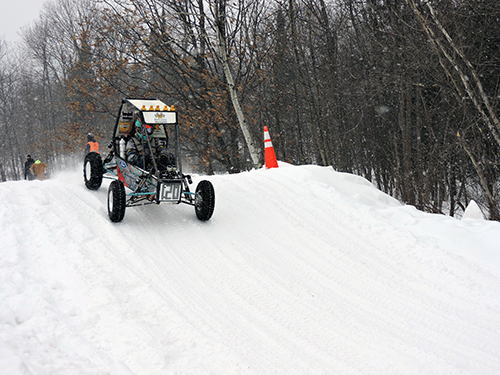 “The race had bad conditions that stalled the track and rerouted the track. We did a lot of ice testing, so it did help our drivers do better,” Stuckey said. “With the track redirection and everything that happened we just focused on having fun. We knew we were doing really well. We just didn't think it was well enough to place. It was a nice surprise.”

The team improved from its ninth place finish in 2017 and received the trophy for the fastest lap.

Kettering’s Baja team designs and builds an offroad vehicle from scratch in the SAE Garage on campus. The students design all the parts and make them by hand to get their vehicle ready for the main event — a four-hour endurance race going head-to-head on the track with all the other teams.

With 22 Kettering students — the most ever — at the competition, the team worked well together and were more prepared than in previous years, as well, Stuckey said. The team went up against more than 20 teams with 47 cars total on the track.

The weather conditions changed how the drivers operated during the race, but Aaron Pitzer ‘21 said it made things more fun.

“My favorite part was the snowfall on the track that happened during the race. It made things slicker and more fun,” Pitzer said. “The snow helped with the slick parking lot. It changed how you ran the track. Usually the track gets worn down, but the weather conditions changed that.”

Although Stuckey had a minor issue after two laps of the race when the throttle cable broke off the pedal, he said his team had the tools out ready to fix it quickly. It was a good team effort, he said.

“The track was my favorite part. The jumps were well planned and the layout was really nice. The flow moved very well when it was rerouted and there were no pile ups,” Stuckey said. “It allowed for a really competitive race.”

On top of the racing aspect, Stuckey said that he loves having something to design and build to give him that hands on experience.

The Kettering Baja team now is preparing and finishing a new car for their SAE competition April 19-22 in Maryland. The team also hopes to finish well during that competition.