Two Kettering University students are testing equipment on the Orion Spacecraft, the NASA space vehicle built to take humans as far as Mars.

Applied Physics students Joshua Wylie ‘19 and Gabby Feeny ‘19 are working at Deep Space Systems, a systems engineering company focused on science and exploration spacecraft in Littleton, Colorado, for their co-op. They are testing cameras and camera control systems for the spacecraft’s first three-week, unmanned mission beyond the moon, Exploration Mission-1.

“Getting to work on something that’s going to be integral to the future of human space travel is so inspiring,” Feeny said. 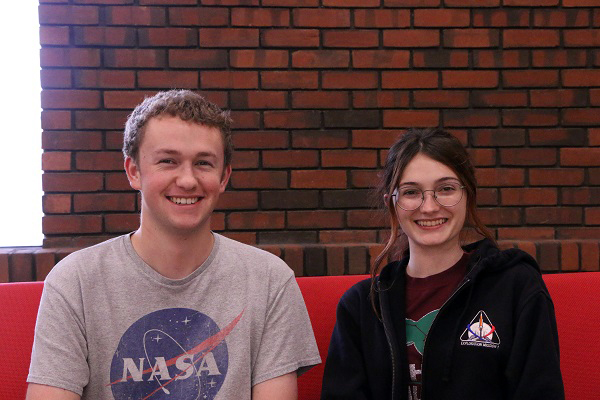 The students started working at Deep Space Systems in October 2017. The company contracts with NASA on the Orion Spacecraft, which is being built and tested to carry astronauts deeper into space than any previous mission starting in the early 2020s.

Wylie and Feeny are testing the camera equipment to ensure it can handle conditions in space by using a thermal vacuum and vibration testing. Because space has no atmosphere and doesn’t maintain heat and the takeoff subjects the equipment to high temperatures, the camera equipment has to stand up to extreme temperature fluctuations. The camera and controller systems also need to work after the intense shaking of takeoff.

“The goal of these tests is that the hardware will remain safe and effective after launch. What we're looking to prevent are scenarios where the launch could jiggle wires loose and cause a fire or result in any other issues for the crew or the craft,” Wylie said. “After every test for the equipment, we do a performance test to see if it can still operate effectively and send out correct signals for the controllers.”

Wylie found the dynamic at Deep Space Systems is different than any place he’s worked. The employees around him work long hours simply because they are so passionate about what they are doing, he said.

“It’s definitely helped me grow professionally and given me a better idea of what to expect in the workplace,” Feeny said.

Both Feeny and Wylie have found Kettering offers them ways to make a difference in their community. Because Kettering is small, students have leadership opportunities. Feeny has held leadership positions in her sorority, Alpha Phi, and Physics Club. Changes she implemented have impacted and benefitted the organizations, she said.

“The small school offers a lot of connections for people you might not necessarily interact with,” Wylie said.