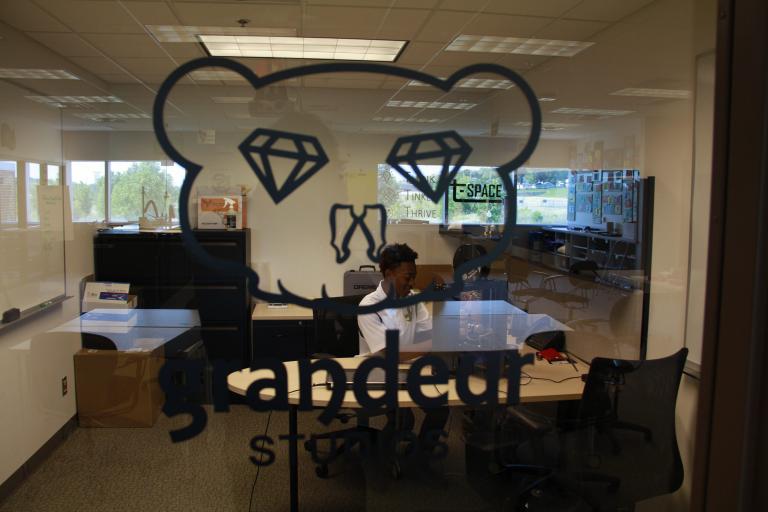 “That’s how I get a feel for what people want and what they are interested in. People want to have something that represents their pop culture experiences.”

Are you a fan of Guardians of the Galaxy? Maybe you’re fascinated by the characters or drawn to the power of the Star Lord Infinity Orb? Andre Ray ‘16 wants to bring you closer to the characters and stories through his start-up Grandeur Studios.

Grandeur Studios specializes in making movie and video game replica props. The Star Lord Infinity Orb is now on sale at ebay. A replica SMG plasma gun from the upcoming Halo 5 video game and exotic weapons from the video game Destiny will also be available in the near future.

“I’m a movie and video game guy and an aspiring collector,” Ray said. “That’s how I get a feel for what people want and what they are interested in. People want to have something that represents their pop culture experiences.”

Ray himself is a huge film and video game fan which is what propelled him to visit fan sites online. He noticed that fans were uploading models of items from their favorite movies.

“I saw that other people wanted to print these items,” Ray said. “Then the idea came to me. I can print and make the items that people wanted.”

So Ray bought a 3D printer and housed it in his bedroom near Dupont Street and Welch Boulevard, a few blocks north of Kettering’s campus, and began printing 3D objects upon request. He then expanded his operation from 3D printing to creating custom objects such as the Infinity Orb.

His process: first construct a CAD drawing of the object in question; then use it to 3D print a master; lastly, mold the master with silicone and construct resin casts from it.

“Right now I’m doing replica props but I want to expand on that in the near future,” Ray said. “I always had a vision to have an art studio. I want to create my own art with 3D printing as a medium.”

Ray is one step closer to his vision after he was awarded $2,100 in seed funding from the Kettering Entrepreneur Society (KES) earlier this term. He was also given an office in the T-Space in the C.S. Mott Building on campus.

“With the funding, I was able to buy my own 3D printer, an airbrush and a vacuum chamber,” Ray said. “These are all things that are expensive and I intended to purchase from future profits made by the company.”

The T-Space opened in December 2014 and is an open laboratory space that provides students access to 3D printing, laser cutting, soldering and other utilities to work on small electric and mechanical prototypes. Ray is one of the many users of the space during his personal time.

During his professional time, Ray is a Mechanical Engineering major completing his co-op at Key Safety Systems in Sterling Heights, Michigan. While living five minutes from campus for the majority of his life, Ray didn’t consider Kettering until his eighth grade teacher asked him what he wanted to be when he grew up. Ray replied “an engineer” because it’s the only thing he wanted to do. She suggested he attend Kettering because Ray, “reminded her of her husband and he was an engineer that went to Kettering.”

“I knew it was a great engineering school and I’ve always been involved in engineering - taking apart stuff and putting it back together,” Ray said. “My grandpa got me into circuit kits when I was really young. He would take me with him on electrical and carpentry jobs.”

Now, many years later, Ray is excelling as an engineer and artist at Kettering. He’s fusing his childhood passion for engineering with his dream of creating an art studio. He plans on pursuing full-time work after graduating while still keeping his office in the T-Space to grow Grandeur Studios.

“I definitely still love engineering,” Ray said. “There’s always a split between art and engineering which can be two opposites at times. With my business, I get to keep the engineering aspect and still do the art too.”