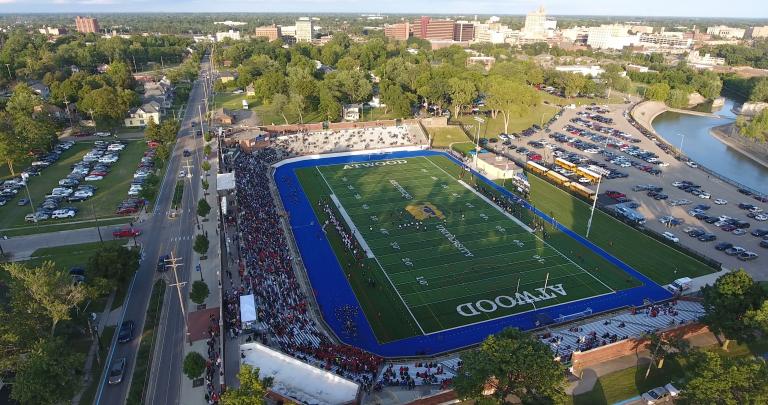 Kettering University has a powerful history in the Flint community. Founded 100 years ago in a time of incredible expansion and growth in Flint and in Michigan, Kettering has done more than bring a unique education model to students.

Kettering leaders believe that Kettering only succeeds fully if the city of Flint succeeds, as well. Community vitality and community service have been ingrained into the campus atmosphere with the University’s students, faculty, staff, and alumni partnering with city changemakers to bring positive energy and change. 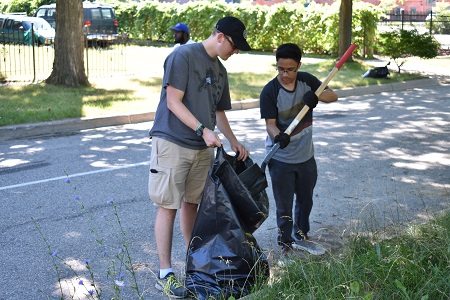 The landscape around the university was once dotted with blighted properties, overgrown yards, and a decaying historic football stadium. Driving down University Avenue (previously Third Avenue) the landscape is now drastically different, more vibrant, and continuously growing.

Kettering University played a major role in the positive trajectory.

Many freshman students, in fact, serve in the community before they even step into a classroom as part of their first weekend on campus. Service Saturday events began in 2009, but a truly transformative vision for the university started to form in 2012. It was then that community vitality truly became a part of Kettering’s identity.

“Kettering University is a world-class science, engineering, and business polytechnic in the heart of Flint. We are part of our community. As part of that stewardship we believe we have the opportunity, obligation, and the ability to be a force for positive change in our city. We do this by using the resources of the university and encouraging our faculty, staff, and students to apply their talents to help reset the underlying economics of Flint and reinforce positive community action,“ said Kettering President Dr. Robert K. McMahan. “We also believe that there are implicit obligations of service and professional ethics in the disciplines we teach. The best way for us, as an institution, to teach those to students is to model them as an institution – and to strive to live them in all we do.”

McMahan became the University’s seventh president in 2011 and heavily integrated community vitality into Kettering’s mission and made substantial contributions to regional socio-economic development.

A transformation began to take place. 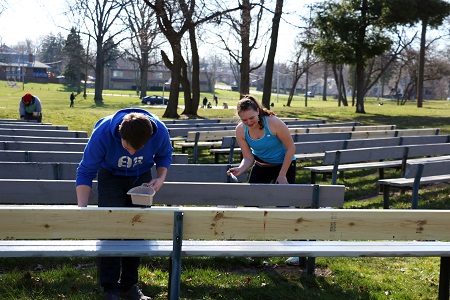 In August 2012, Kettering University created a new position to boost community outreach by naming Jack Stock the director of external relations to act as a liaison between the University and community. Shortly thereafter, the University Avenue Corridor Coalition was created, bringing together residents and area institutions, including Hurley and McLaren hospitals, Kettering University, and University of Michigan-Flint, to work collectively to beautify and draw investment to the area. The landscape was once dotted with blighted properties, overgrown yards, and a decaying historic football stadium.

The UACC region extends from McLaren Hospital on the west to the University of Michigan-Flint on the East. It is bounded by Hurley Medical Center and Whaley Children’s Center on the north and the Flint River on the south. Kettering is in the heart of the corridor. The organization’s mission is to transform the region into an attractive and crime-free community that is conducive to sustainable development.

Throughout the years, the group has led community cleanups that involve neighborhood associations, college and high school students, private residents, and many others. Those cleanups have successfully beautified and maintained landscaping, fixed broken windows, painted both residences, and businesses and–most importantly–brought a fresh perspective and collaborative spirit to the avenue.

And, in a short amount of time, those efforts became a model for community engagement and neighborhood stabilization in areas around the country.

Kettering University has played an active role in organizing the many people and organizations invested in the corridor and providing resources to ensure those collaborative efforts are successful. Kettering’s efforts have included taking on neglected properties, demolishing more than 100 unsafe structures, and creating and maintaining natural green spaces.

“The success of the Flint-area community relies on partnerships between many institutions, community groups, and engaged businesses and residents,” said Tim Herman, CEO of Flint & Genesee Chamber of Commerce. “Over the years, Kettering University has been an active partner in the rebound of downtown Flint and revitalization of the community. We appreciate all that the institution brings to the region and congratulate them on their 100th anniversary.”

Kettering and a coalition of community partners led a historic revitalization of Atwood Stadium, including installing a state-of-the-art playing surface rivaled only by those at Ford Field in Detroit and Michigan Stadium in Ann Arbor. The facility gives the city a venue capable of hosting concerts, major sporting events, and community events. Since reopening the stadium in 2015, Atwood has become home to high school football games, including the annual Vehicle City Gridiron Classic; professional soccer teams; community events; and much more. Kettering University also took over the Atwood Stadium Races in 2018 to carry on the nearly 40-year history of the races.

Partnerships with organizations like Carriage Town Ministries and the Ruth Mott Foundation have transformed two formerly blighted corners at University Avenue and Grand Traverse into attractive mini-parks, both of which have hosted community gatherings and family-friendly events since their creation. 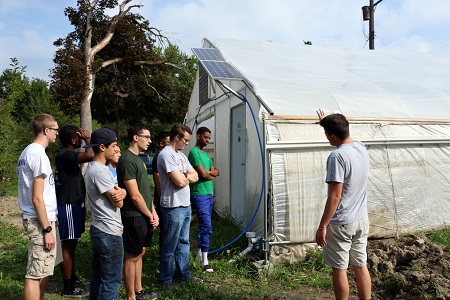 “Kettering University has made neighborliness a part of its DNA. They are a catalyst of relentless daily attention to friendliness, bridge building through collaboration, and continuous improvement through investments of time and resources up and down the University Avenue Corridor. Dr. McMahan and his team have led by example, engaging neighbors, and partners from all walks of life to bring vitality to the corridor and Flint,” said Dallas Gatlin, executive director of Carriage Town Ministries, a shelter for homeless men, women, and children on the east end of the University Avenue Corridor.

“The leadership and people of Kettering University have been especially kind to my organization. Staff and students have served as volunteers and work-study students have brought youth and energy to our programs. Kettering’s facilities crew also helped us create a park. There’s much more to say. Just come to the corridor and you’ll see life, health, growth, and neighborliness, in large part led by the positive culture and good people of Kettering University.”

In October of 2014, the UACC, with Kettering University acting as the fiduciary, received a $1 million community engagement grant from the U.S. Department of Justice. The grant, along with other partnerships, focused on crime prevention and blight elimination along the corridor.

Along with removing blighted properties, monthly service projects focus on CPTED–Crime Prevention Through Environmental Design–methods. This allowed community leaders, neighborhood residents, and other institutions to be empowered to be part of the change.

Student groups have partnered with community groups in many service projects along the University Avenue Corridor, including cleaning up and enhancing Flint parks, assisting local businesses and schools in beautification projects, and working with youths in the community to facilitate STEM and art projects and workshops.

Faculty, staff, and students champion change in the community. It’s ingrained in what they do. Dr. Laura Sullivan, Mechanical Engineering faculty member and faculty advisor for Kettering’s SAGE (Student Association of Global Engineering), is one of those driving forces. 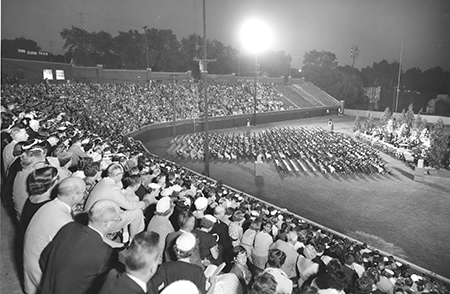 Sullivan pushes community collaboration by connecting Kettering students with local initiatives. She was key in bringing a grant from the Ford Motor Company Fund to Flint to design and build a self-sustainable hoop house. She then connected students' skills and knowledge to crucial projects in the city.

Tom Wyatt, Director of Neighborhood and Community Services at Kettering, started at the University as the Byrne Grant coordinator. He worked to connect with neighborhoods, organize placemaking and block party events, and sought out feedback from the community with every step.

The changes both Wyatt and Stock have seen in their roles throughout the years has been significant.

“Flint is in a rebirth. The university was founded on innovations and continues to innovate with the work we do within the community. We have the flexibility to be creative,” Wyatt said. “It’s not just the Kettering campus that’s important. It’s the neighborhoods. It’s the businesses. It’s the corridor and the city as a whole.”

There’s still work to be done. Stock and Wyatt say it’s key to continue making connections and getting others involved in the city’s rebirth. Kettering will continue to be a driving force. Listening to community members to learn what they need will create an even brighter future.

“We continue to try to draw in partners. Part of the strategy is to draw in other anchor institutions and partners to help us with this vision,” Stock said. “We will continue to connect the dots, so people don’t feel like they are alone or isolated whether they are businesses, people, or organizations.”

Kettering vows to continue to be a steward in the community. The University, its staff, faculty, and students, will continue being a driving force in the Flint area to facilitate positive change and success.

Kettering succeeds when the city of Flint, its residents, future generations, and the neighborhoods succeed.

“I am confident that a belief in the importance of giving back through community involvement has become an organic part of who we are as a University. I know our contributions to the community will continue to grow as will our positive impact on Flint,” McMahan said. “I am deeply proud of the passion and energy that our students, faculty, and staff bring to these efforts and of how they work every single day to make a difference in our world – and in our home.”