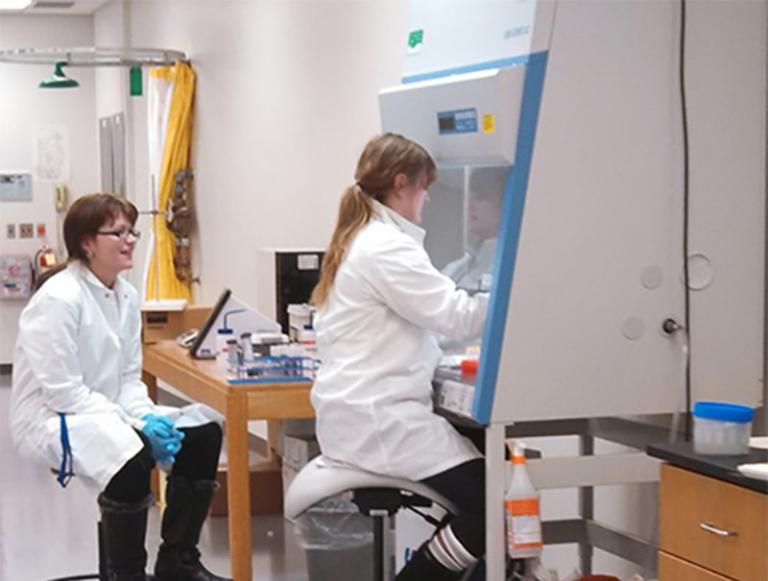 “I was responsible for maintaining my own cell line. And from that cell line we were doing luminescence assays to measure cell growth on the different prosthetic surfaces.”

Kettering University student Julia Carson’s mother is an oncology nurse and her father is a controls engineer – combine the two and you have the makeup of her passions and academic pursuits at Kettering.

Carson is a Mechanical Engineering major with a minor in Biology and is striving to solve engineering dilemmas involving the human body. At Kettering, she has partnered with Dr. Cheryl Samaniego, Applied Biology professor, to address the concerns of joint replacement materials.

Typically, joint replacement materials in the knee and hip last an average of 10-15 years after which they begin to deteriorate. The materials break down into smaller components and trigger the body’s immune response. Samaniego, Carson and colleagues are performing biocompatibility studies to test different coatings and surfaces designed by Chemical Engineering faculty Dr. Susan Farhat, Dr. Mary Gilliam and Dr. Ali Zand that can be used on joint replacement materials to enhance their durability and longevity and minimize the deterioration that leads to ill effects in the human body.

“Prosthetics used in joint replacement surgeries need to be replaced again after a certain time period,” Samaniego said. “After about 10 years, a person has swelling and pain all over again, and sometimes it’s worse than when they first started. This is because the artificial joint material begins to break down over time, and the particles released in the deterioration of the prosthetic cause an immune reaction. Our team is using plasma to overlay the artificial joint material with more body friendly coatings. Our team’s goal is to design coatings that won’t break down as readily. If the coating does break down, many years down the road, these substances won’t cause the immune responses such as swelling or pain.”

Carson’s role in the lab was to grow mammalian cells on the different coated surfaces to measure the how well the cells grow on the coated surfaces versus non-coated surfaces which are found on the market today. Her study lays the groundwork for future studies that mimic the conditions in the human body.

“I was responsible for maintaining my own cell line,” Carson said. “And from that cell line we were doing luminescence assays to measure cell growth on the different prosthetic surfaces.”

Before the cultures were grown on the experimental surfaces, the research team attempted to determine longevity of the material through “wear testing” – a process that applies forces at various angles to the surfaces to mimic the normal stresses on joints in the human body.

“What surfaces have already shown to be friendly to the human body? We look at these polymers first, then alter their molecular weight by adding or removing side chains to create different compounds,” Samaniego said. “We use derivatives of substances that we already know are safe in the body. We are taking what we know to be biocompatible substances and trying to make them better.”

Carson was able to translate her experience with cell cultures in the lab to her co-op placement at Corning Life Science where she was able to broaden and diversify the scope of her projects with her newly acquired skills. She also became more comfortable with laboratory techniques and the overall experimental process through troubleshooting and brainstorming to solve the challenges of the prosthetic research. Carson will present the research team’s findings at the Michigan Academy of sciences in spring 2013.

“It’s the best thing that I’ve done at Kettering just because the experience it gives you. It’s really hands-on,” Carson said. “It’s really interesting – who gets to work on research like that at the undergraduate level? It’s an honor and a great experience.”