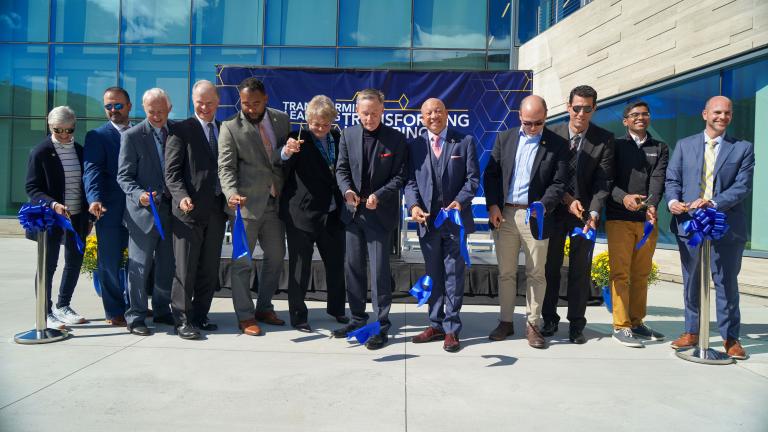 “This building brings together a number of those aspects in an artful and functional way that promotes collaboration among students and faculty. ”

“We see the Learning Commons as a revolution in how universities conceptualize space, how they fashion space to create and support behavior and a collaborative model,” said Kettering University President Dr. Robert K. McMahan. “To learn more about it and its purpose, you must first suspend everything you think about university spaces. The Learning Commons is unique. There is no building on a college campus, or anywhere else, quite like this.”

The one-of-a-kind building has spectacular collaborative and social spaces that bring together students, faculty and staff, and reflect Kettering’s commitment to creating a campus that best prepares students for future careers.

Featuring wide-open, technology-enriched spaces, the Learning Commons encourages collaboration and innovation, attributes fundamental to Kettering’s 103-year history and its values as a cooperative learning model today and in the future.

The facility includes a digital library, a 200-seat auditorium described as a “mini” IMAX theater, dining facilities, media resource centers, outdoor patios with seating, multiple collaboration spaces and a suite for guest professors and lecturers. There is also a reflection space where people can have privacy.

The natural light throughout the building is welcoming, which energizes people and makes them excited to work. The study spaces have incredible views of the campus.

“I would pay close attention to a small area or aspect of a building and how people interacted within the space,” he said. “This building brings together a number of those aspects in an artful and functional way that promotes collaboration among students and faculty. The open meeting spaces with comfortable furniture and meeting rooms with glass walls allow people to see what’s happening inside and encourage them to participate.”

The building is designed so people can stand on one side and see through to the other side with unobstructed sightlines. In addition, stairways to each floor are not stacked, forcing people to move laterally before they can move vertically, encouraging movement throughout the building.

“This is a museum-caliber environment in terms of construction quality and systems,” said McMahan. “It can be modified and expanded and will last 50 to 60 years. The only thing you can do is build something that’s flexible enough to let people define the building.”

The Charles Stewart Mott Foundation granted $25 million to support construction of the building.

“The Mott Foundation is pleased to support the Kettering Learning Commons,” said Mott Foundation President and CEO Ridgway White. “We believe the building represents the ingenuity that Kettering and its students embody, and we look forward to seeing future Kettering graduates learn and excel in new ways that will propel Flint and Michigan to be leaders in fields of work and study that have only begun to be imagined.”

The Learning Commons was also the centerpiece for the University’s Boldly Forward Capital Campaign, which raised $155 million from July 2012 through December 2021. Of that total, $45.4 million went toward the facility. Kettering received funds from more than 6,000 donors through the capital campaign, which will provide scholarships and upgrades to several buildings.

“Many of us owe our success to what we learned at Kettering, and many alumni chose to give back to the university through the Boldly Forward Capital Campaign,” said Gary L. Cowger, chair of the Boldly Forward Capital Campaign and a graduate of General Motors Institute (now Kettering University). “Along with alumni, many companies, foundations, and individuals view Kettering as a leader in co-op education that graduates students ready to enter the workforce with years of experience. Their dollars will make a huge difference to the university and its students today and in the future. We greatly appreciate the support of all donors.”

Cowger retired from General Motors after a 45-year career as group vice president of global manufacturing and labor relations and was president of GM North America before taking over global operations. He is now chairman and CEO of GLC Ventures, LLC. He received a bachelor’s degree in industrial engineering from the university in 1970 and an honorary Doctor of Engineering from Kettering in 2007.

The Learning Commons was designed by world-renowned architectural firm Stantec, which has designed academic facilities in 37 states and provinces across North America.

The Learning Commons is expected to have a positive effect on Kettering students and faculty for decades to come.

Officials broke ground on the Learning Commons on Feb. 5, 2020.